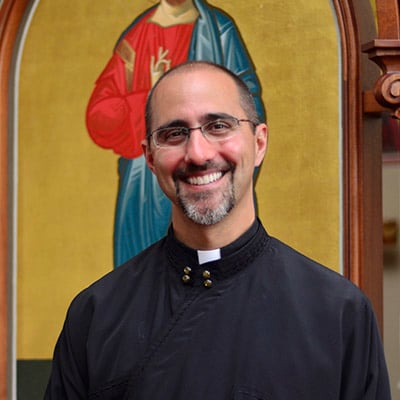 Father Evan received his Bachelor’s Degree in Philosophy from Boston College with an emphasis in Business Management and Christian apologetics in 1991. He earned his Master of Divinity from Holy Cross in 2002 and served as an assistant priest for five years at Saint Catherine Greek Orthodox Church in Greenwood Village before being assigned as St. Spyridon’s first full-time priest in August of 2007.

Father Evan's current parish of Saint Spyridon began humbly, in its first year only six families called St. Spyridon home. Today it is a vibrant and growing parish of several hundred. The ministries and members of the parish represent a wide range of backgrounds and interests which make the parish a diverse place of worship, witness, and service. In August of 2018 the parish moved into a new 18,000 square foot sanctuary and facility.

In 2002, Father Evan founded the St. Nektarios Education Fund, a non-profit student education program. The fund, which he still manages along with its board, has established five schools in Africa, educated over 5,000 students and delivered over $1,000,000 in student aid through its network partners of IOCC and OCMC.

Father Evan has served as the Metropolis of Denver Program Director of Camp Emmanuel, its summer youth camp program, and as the Metropolis Clergy Syndesmos President. You will find podcasts by Father Evan at www.SaintSpyridon.church, and you can listen to his live call-in radio show called “Orthodoxy Live” on Ancient Faith Radio, which broadcasts every Sunday night at 5 pm Pacific/8 pm Eastern.

Father Evan his wife Presbytera Anastasia are the happy parents of three daughters, Alexia, Eleni, Maria, and a son Spyridon; they live in beautiful Fort Collins, Colorado where they ski, flyfish, and hike.