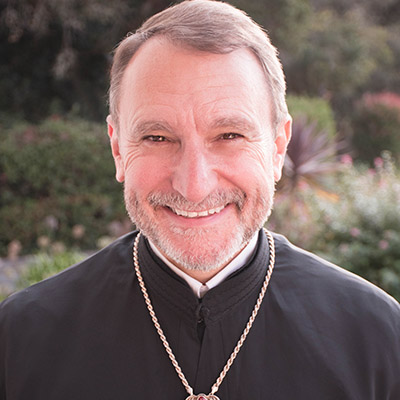 Father Aris P. Metrakos has served Holy Trinity Greek Orthodox Church in San Francisco since June 2008. The oldest Greek Orthodox parish west of the Mississippi, Holy Trinity finds itself in a city with relatively few children and even fewer Greeks and Greek-Americans. Knocked slightly off course by a disruption in the pastorate and unfortunate financial circumstances in 2007, Father Aris has shepherded Holy Trinity as the parishioners have worked together to fulfill the Great Commission and live out the mandates of Matthew 25, without asking existing or new parishioners to adopt a contrived spiritual or ethnic identity.

Father Aris has served in the Greek Orthodox Archdiocese of America for over 30 years, authored both youth and adult educational curricula, crafted stewardship materials, garnered an extensive amount of summer camp experience, and worked abroad sharing American youth ministry experiences and methodologies. For the past decade he has assisted Metropolitan Gerasimos in a variety of tasks including managing the National Ministries program, assisting parishes in crisis, facilitating the assignment of priests, and supporting new and existing Metropolis ministries.