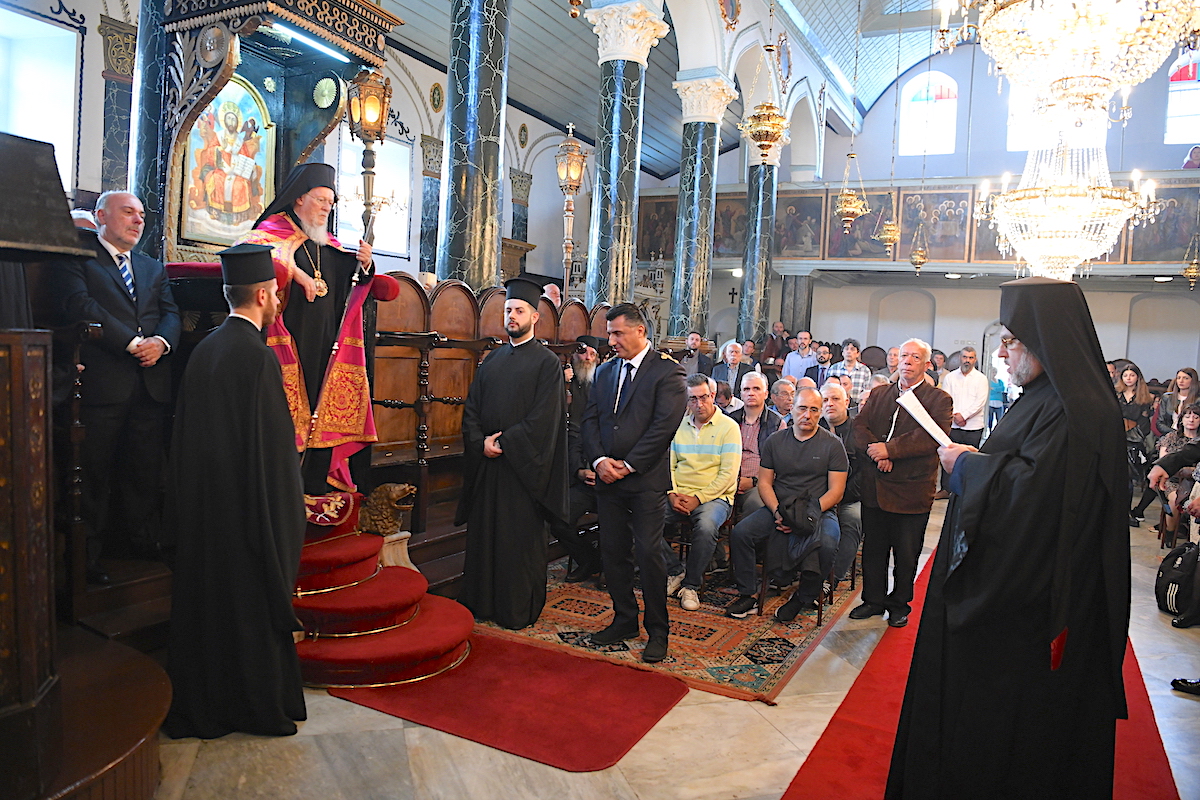 NEWS FROM THE ECUMENICAL PATRIARCHATE

“The Ecumenical Patriarchate today struggles, in the face of many confusions and reversals, to safeguard the faith of the Fathers, the doctrinal worship of God, and ecclesiastical morality, thereby giving testimony of his love to his neighbor: whenever you did these things to the least of my brothers, you did them to me,” the Ecumenical Patriarch Bartholomew pointed out in his address after the Divine Liturgy which he celebrated on Sunday, October 27, at the renowned Holy Church of St. Demetrios Xyloporta. 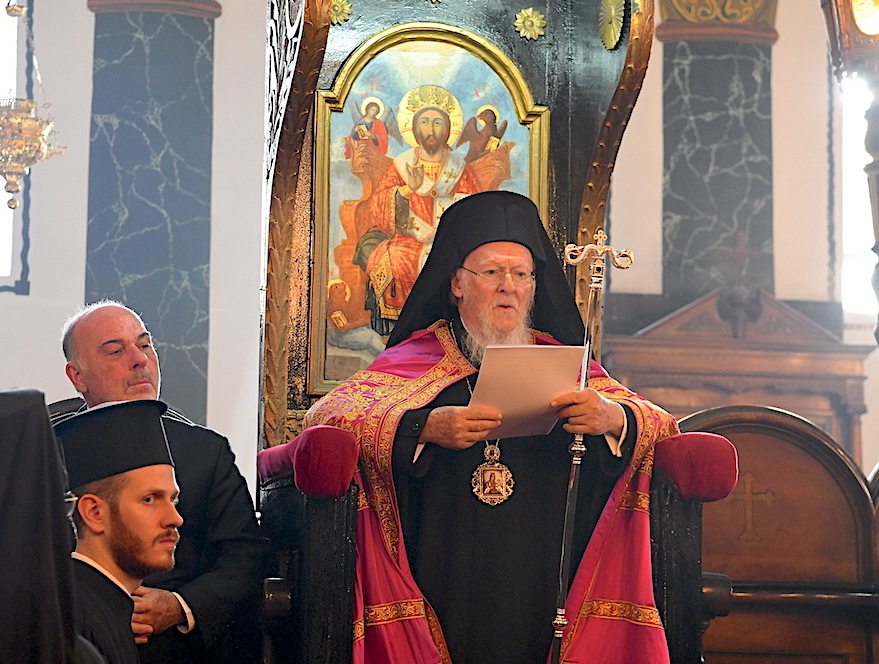 “The Great Church expresses the Orthodox presence, identity and testimony, free from barren conservatism, fundamentalism, ethnophyletism and the refusal of dialogue with the modern world. In our age the ‘ideology of self-realization,’ which works against sacrificial love and the culture of solidarity, is spreading rapidly. But it is a dangerous illusion to believe that engaging with ourselves and our many needs fills the existential vacuum, gives meaning to life, and answers major existential problems. On the contrary, self-centeredness enlarges the impasse and destroys the creative forces of man. The ‘orthodox will regarding mankind’ includes ministry and love as the answer to how we must live as Christians in the world, in response to the question, what is the true meaning of our freedom, what is our destination?”

Previously, His All-Holiness referred to the popular Holy Great Martyr Demetrios the Myrrh-Streamer, in honor of whom many churches are dedicated throughout the Orthodox world, and of course to the City, where five imposing churches operate in his honor.

“The church we are in has its own history. It has been the seat of the Ecumenical Patriarchate for many years and reminds us of the experiences of the Holy Great Church of Christ, when she was forced to abandon her historic seat and become a wanderer, in keeping with the will of the authorities. The seat of the Great Church was moved, but the manner of obedience of the people of God to it was not undermined. The faithfulness to the Tradition of Orthodoxy, the good witness “in the world” to the truth “out of the world,” which is a Person, being the incarnate Word of God as an existential commitment and response to His salvific action and relationship to us, according to John: ‘but that he loved us and sent his Son to be the expiation for our sins.’ (1 John 4:10).”

In his address, His All-Holiness also referred to the presence of large numbers of pilgrims from Greece.

“We are particularly pleased because this festive weekend many visitors and pilgrims have arrived to our City from Greece. Of course, all Greeks who come to the City of Constantine, the See of the First-Throned Orthodox Church, are pilgrims. In the blessed soil of the Reigning City, there is everywhere a mark of our own Orthodox way of life, the eloquent silence of our own past and the greatness of our People (Genous), our churches and sacred shrines, schools and institutions, all marked by the faith, intelligence, creative power, the ethos of our ancestors. None of these are foreign to you, my beloved, nor are you here just visitors and foreigners.

“Brothers and children, may the Lord of glory and God of mercy grant you to contemplate and cherish the Holy Great Church of Christ, our Patriarchate, to give a good witness of faith, love, and hope to modern man.

Your Patriarch is praying without ceasing that Almighty God may bless and protect all the children of the Mother Church, leading them to straight paths and giving them peace from above, so that they may always prevail.”

Earlier, His All-Holiness was welcomed by Bishop Adrianos of Halicarnassus, Supervisor of the Phanari-Keratios Gulf District. In his address and on the occasion of the recent anniversary of the election of the Ecumenical Patriarch, he referred to the initiatives of His All-Holiness and the most important landmarks of his 28-year Patriarchate. Subsequently, the President of the Commission, Nikolaos Kalamaris, presented the work of the community. His All-Holiness expressed his pleasure and congratulations to the Bishop of Halicarnassus for his dedication and work, and also to the priest of the church, Fr. Athanasios Mamassis, and the President of the Community N. Kalamaris and the other Board Members for their good management of the church and community issues.

During the Divine Liturgy, Metropolitans Chrysostomos of Myra and Athenagoras of Kydonia, the outgoing Greek Ambassador to Ankara Petros Mavroidis, the Consul General of Ukraine in Istanbul Oleksandr Gaman, and a host of worshipers from all over Greece were present in the church.

Afterward, His All-Holiness granted a private audience at the Patriarchal Office, in the Phanar to Ambassador Petros Mavroides, and thanked him for his interest in the issues of the Patriarchate and the Omogeneia and gave a formal farewell dinner in his honor.

Presentation of a commemorative volume for the renovation of St. George Edirnekapi

On Sunday afternoon, the presentation of the book The Church of St. George Edirnekapi and its Renovation took place in the ceremonial hall of the Church of Saint George in Adrianopolis, in the presence of the Ecumenical Patriarch.

During the event, the official in charge of the church, Bishop Kyrillos of Erythres, Abbot of the Holy Trinity Monastery of Halki, and the Archon Hartophylax of the Great Church of Christ, Panteleimon Vigas, spoke, as well as the Turkish architects, archaeologists and academics who collaborated on the restoration of the church in the years 2014-2017. 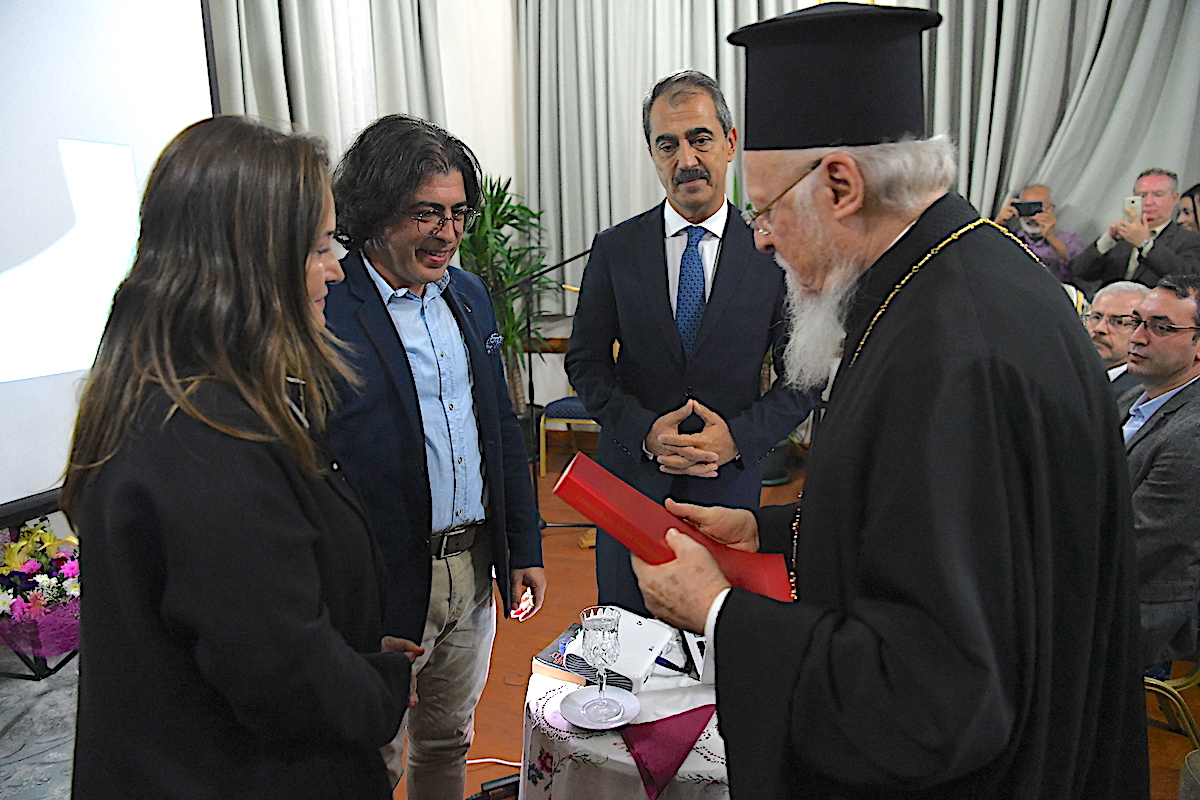 In his brief speech in Greek and Turkish, His All-Holiness congratulated all those who contributed to this important work of saving and promoting this historic church.

The event was attended by the Consul General of Greece in Istanbul, Georgia Sultanopoulou, Mr. Mursel Sari, head of the Vakf Directorate of Istanbul, as well as associates of the Vakf Directorate General, which contributed to the restoration and renovation of the church, as well as to the publication of the book presented, Mr. Mahir Polat, a young man in charge of the Metropolitan Municipality Cultural Monuments Directorate, expert specialists, the President of the Ecclesiastical Committee, Elias Yofoglou, as well as a number of people from the Diaspora and other foreign Orthodox believers who attend the Church of Saint George in Adrianopolis.