Archbishop Demetrios Delivers Invocations at the N.Y. State Senate and the 2012 State of the State Address

Print Archbishop Demetrios Delivers Invocations at the N.Y. State Senate and the 2012 State of the State Address

Albany, NY – Archbishop Demetrios of America delivered yesterday the invocation at the 2012 Opening Legislative Session of the New York State Senate and the Ceremony for the 2012 State of the State Address by New York Governor Andrew M. Cuomo. 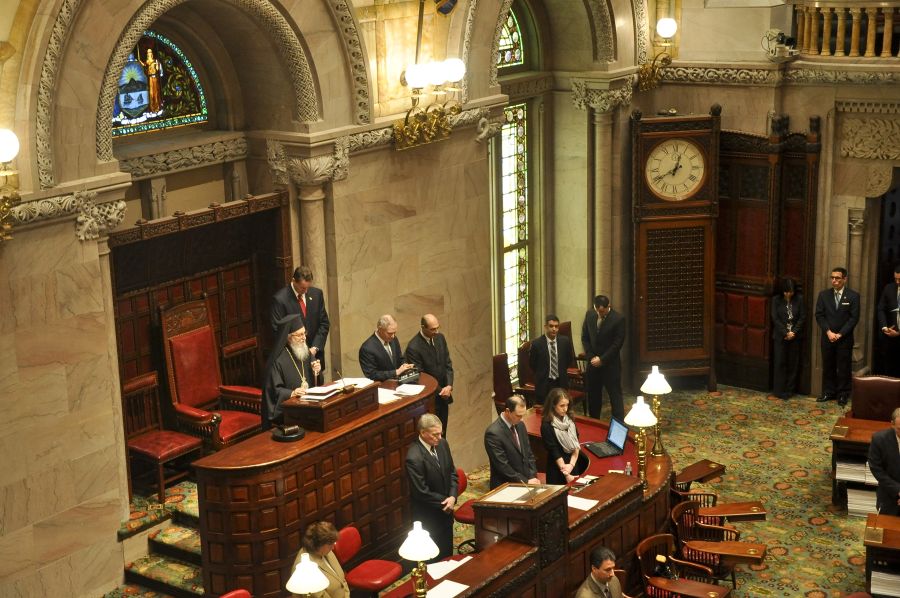 Early in the afternoon, in the Senate Chamber, His Eminence was introduced to the Members of the Senate by the Lieutenant Governor Robert J. Duffy, offered the invocation and attended the first legislative session of the new year.

Archbishop Demetrios, in the prayer said in part: “we ask You to grant our Senators an extraordinary measure of virtue so that with foresight, sensitivity, and creativity they may perform their duties in these times of tremendous challenges and opportunities. Grant them hearts of compassion for the needy; enlighten their minds with the virtues of tolerance, respect and passion for justice. Throughout their deliberations in this 2012 Session, grant unto them and to those who work with them health, peace and safety in all their ways.”

In the short session that followed, Senate Majority Leader Senator Dean G. Skelos offered warm welcoming remarks to the Archbishop and said: “I would like to start off by welcoming His Eminence here, not only is he the spiritual leader of my Church in this Great Country, he is also a spiritual leader for all faiths. So we welcome you Your Eminence to our Chamber.” Minority Leader Senator John L. Sampson started his remarks by saying: “I want to give a special welcome to His Eminence Archbishop Demetrios of the Greek Orthodox Church. Thank you very much for that prayer, and I am glad that with the help of Governor Cuomo we were able to ensure that St. Nicholas Church will be rebuilt in Ground Zero.”

Following the conclusion of the Senate session Senator Skelos accompanied the Archbishop to the nearby Empire State Plaza Convention Center for the 2012 State of the State Address by Governor Andrew M. Cuomo. The ceremony was attended by all members of the Senate and the Assembly, legislative leaders, State officials, Mayors from around the State including New York City Mayor Michael Bloomberg, and thousands of people. 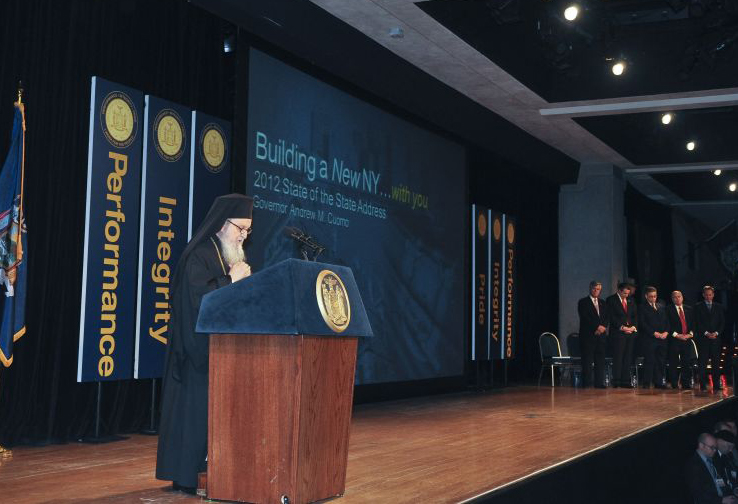 “Grant us to live in harmony with one another, and with all of Your glorious Creation, in mutual respect and love. Grant to our Governor, Andrew Cuomo, the spirit of courage, justice, prudence, and discernment. Keep him in safety and health for many years, always leading the people to victories over injustice, poverty, and everything that is harmful to the dignity and sanctity of human life.

We thank You, Almighty God, for this occasion to gather as a free people and to contemplate the challenges and opportunities that lie ahead for our State. Through the blessing of our diversity, give us the gift of unity. Make us worthy of the sacred mission to which You called us, as citizens of a Nation that is a beacon of democracy for all people, so that in all we consider and speak and do, we may honor You, the Author of Freedom, Truth and Justice.”

For a video of Senator Skelos’ remarks click here.

For a video of Senator Sampson’s remarks click here.