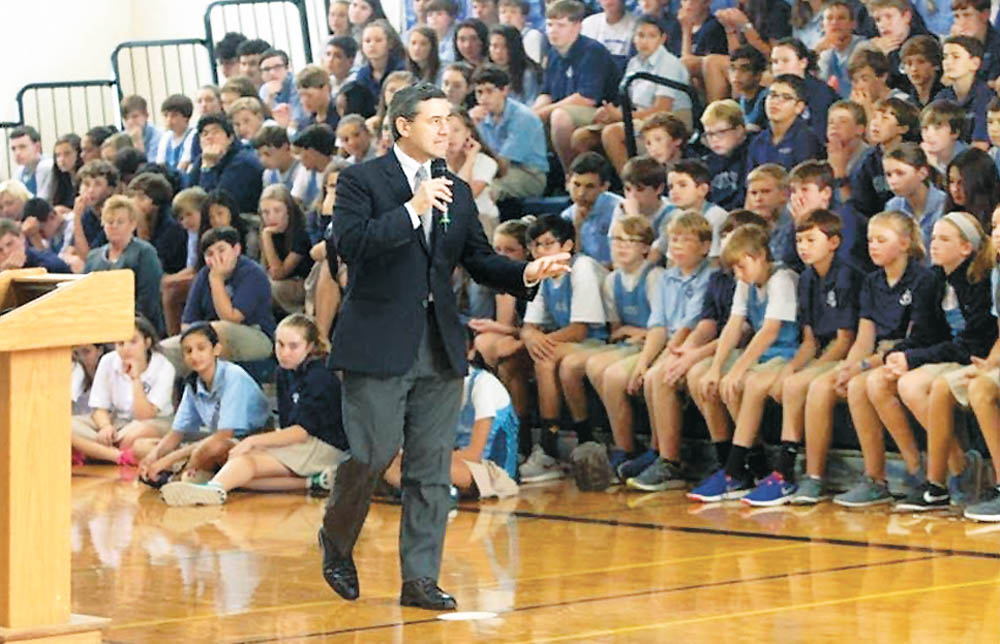 The spiritual focus of departments within the Church can take different forms in order to enhance the spiritual dimension of its overall mission.

That certainly applies to the Archdiocese Departments of Information Technology and Internet Ministries, both under the supervision of Theo Nicolakis, the chief information officer for the Archdiocese, As a Holy Cross School of Theology graduate, he also has the ability to connect with people on both a practical and spiritual level.

When the Parent Education Committee of the Annunciation Orthodox School (AOS) in Houston sought guidance for parents concerned about Internet safety, Fr. Michael Lambakis urged them to contact Nicolakis.

This past fall, committee chairs Georgia Bouchoutsos and Constantina Boudouvas brought in Nicolakis for his third visit at the Pre-K-8th grade school. Boudouvas, a licensed clinical social worker said, “It was a blessing to have Theo come as a technical and Orthodox expert. Many parents are aware of the issues,” she said, “but it’s important to have knowledge fortified in a community setting.”

AOS grew from a ministry of the Annunciation Cathedral of Houston thanks to the vision of Fr. Nicholas Triantafilou, its dean in the 1970s and much of the ‘80s, and the dedication and sacrifice of parishioners. It is now an independent institution spiritually affiliated with that parish.

Nicolakis explained that the term “digital citizenship” has largely replaced the term “internet safety,” and said his talks emphasize “being a responsible Christian citizen in the digital age.”

Nicolakis spent an entire day at AOS conducting a variety of presentations and workshops for parents, administrators, teachers, and students. Well over 100 parents, administrators and teachers attended the 8 a.m. session. Citing statistics, especially pertaining to interactive media, he equipped parents with knowledge of the impact digital lifestyles have on children.

He also talked about tools parents can use to manage the digital world at home. Cisco’s OpenDNS and Disney’s “Circle” are simple and effective tools families can use to protect their home against pornography, gambling, and predators. These tools also give parents information about social media use so that they can set appropriate boundaries for their children.

Nicolakis has been lecturing nationally for 12 years on the topic of Internet safety and digital citizenship. His expertise led to a joint initiative –www.FaithAndSafety.org– between the U.S. Conference of Catholic Bishops and the Archdiocese.

The Faith and Safety initiative has been supported, in part, through the funding of Leadership 100. Bouchoutsos said “The information Theo gave us a few years ago was so important for me [as a mother]. The presentations began a very healthy discussion and prompted school administrators to assess their systems more carefully. I implemented a lot of his recommendations at home.”

During his AOS visit, Nicolakis also addressed 300 middle school students according to Head of School Clint DuBose, who expressed his deep appreciation for the presentation.

AOS told the children Nicolakis was going to give them “a lifelong challenge of changing the world based on Orthodox Christian values.” Did he ever? As a seminary graduate, he knows the teaching power of images and narratives.

“We live in an age where superheroes permeate our landscape as never before. I use the story of Spiderman with kids as a way for them to understand the power of tech.” he said.

He seized on the theme that accompanies Spiderman’s—and every superhero’s— story, “with great power comes great responsibility.”

“I tell the kids they are modern–day superheroes. And it’s true. The power in their hands, whether it’s a mobile phone or a keyboard, it gives them capabilities and thus responsibilities no other generation in human history has had.”

The students gave him their rapt attention as he explained that, “With a single key stroke you can effect change – positive or negative – and make a difference changing the world. With that power comes a responsibility, a Christian responsibility, where not only your actions but your inaction, being a bystander, can have consequences.” As he ended his talk, the entire student body rose for a standing ovation. Afterwards one student came up to him and said, “You really moved my heart with your talk today.”

Thalia Gazis an AOS teacher and parents commented, “The kids still remember his Spiderman talk from three years ago. You have no idea what an impact it made on these kids.”

The validation from parents and students was heartwarming, especially given that AOS is one of the premier private schools in the country. “The AOS community has always been an inspiration to me,” Nicolakis said.

“The commitment by the administration and the parents to raise these amazing kids in an Orthodox Christian–centered environment is unbelievable. You see it in everything they do. Where else do you get 100 parents attending a lecture at 8 a.m. on a work day?”