This article is from PRAXIS volume 16, issue 1: "Parish as Educator."

This first comprehensive biography of the Ecumenical Patriarch Bartholomew will introduce a great contemporary apostle of Christ to generations of people of faith and even people of no faith; people who will resonate deeply with his powerful message of reconciliation, peace, hope, love and ultimate redemption for all God's creatures. – His Eminence Archbishop Demetrios 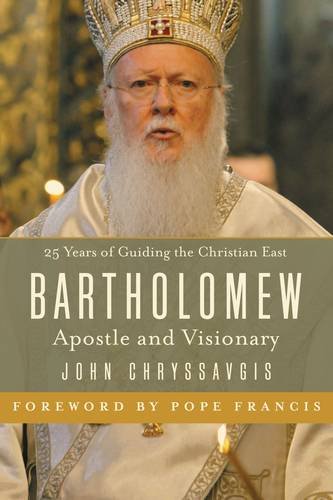 Bartholomew: Apostle and Visionary—the first-ever detailed biography of one of the world’s foremost Christian leaders, His All-Holiness Ecumenical Patriarch Bartholomew—was released on October 11, 2016, with the W Publishing Group, an imprint of Thomas Nelson.

The biography, officially sanctioned and supported by the Greek Orthodox Archdiocese of America, includes a foreword by the leader of the Roman Catholic Church, Pope Francis.

Patriarch Bartholomew oversees the Orthodox Church, which boasts 300 million members worldwide. In one of the most remarkable tenures of the patriarchate, it has been more than twenty-five years since Bartholomew first accepted this ministerial position, which is considered “first among equals” of all Orthodox leaders around the world. He is viewed by many as a strong, humble leader who is well loved across a wide variety of political and religious boundaries.

This book removes the veil that some may have placed upon this joyful man of God who is anything but mysterious, as evidenced by the heartfelt contributions to the book from world dignitaries, influencers and religious leaders that include Pope Emeritus Benedict XVI, former Archbishop of Canterbury Rowan Williams, Rabbi David Rosen, George Stephanopoulos, Jane Goodall, Vice President Joe Biden, Jr., and former Vice President Al Gore, Jr.

“This first comprehensive biography of the Ecumenical Patriarch Bartholomew will introduce a great contemporary apostle of Christ to generations of people of faith and even people of no faith; people who will resonate deeply with his powerful message of reconciliation, peace, hope, love and ultimate redemption for all God’s creatures,” said His Eminence Archbishop Demetrios, Geron and Primate of the Greek Orthodox Archdiocese of America.

With unfettered access to church files, Bartholomew’s personal notes and the patriarch himself, author John Chryssavgis has woven together a picture of a man who has longed to serve God, the Church and the world his entire life. Through personal and institutional challenges, Bartholomew continues to strive toward unity within the Orthodox community and build bridges to others. It is a task that can be as daunting as it is important, as the seat of the Church, Constantinople (Istanbul), is in the minority in an increasingly hostile religious environment.

“It is truly an honor to publish this essential book on such an important and humble man,” said Matt Baugher, Senior Vice President of Thomas Nelson and Publisher of W Publishing Group. “We’re eternally grateful to John Chryssavgis, who has worked directly with the patriarch in this effort. His depth of content has captured this mighty servant brilliantly. For those in the Orthodox faith, this book will be a treasure. For those new to the Church, it will be a fascinating glimpse into an ancient faith that is rapidly growing and providing a spiritual compass to many millions of believers around the world.”

Thomas Nelson, a division of Harper- Collins, is a world-leading provider of inspirational content and has been providing readers with quality life-changing products for more than 200 years. The publishing group provides multiple formats of award-winning Bibles, books, gift books, cookbooks, curriculum and digital content, with distribution of its products in more than one hundred countries. Thomas Nelson is headquartered in Nashville, Tennessee.

Taken from Bartholomew: Apostle and Visionary by John Chryssavgis

He is a leapling, born on February 29, 1940, virtually at the beginning of World War II, in the Republic of Turkey, which had been founded less than two decades earlier and managed to stay out of the war, without taking sides, until it joined the Allies in February 1945.

His name is Bartholomew. But he was born Demetrios; Bartholomew is his church name.

The year 2016 marked the seventy-sixth since he was born, the nineteenth celebration of his actual “leapling” birthday, the fifty-fifth year since entering the priesthood, and the twenty-fifth anniversary of his tenure as archbishop of Constantinople–New Rome and ecumenical patriarch, leader of the worldwide Orthodox Christian Church.

His birthplace is a tiny, pristine village called Haghioi Theodoroi (Saints Theodores), one of six villages on the Aegean island of Imvros (İmroz or Gökçeada), just off the coast of Turkey, near the Dardanelles, the strait connecting the Aegean and the Sea of Marmara. The name Haghioi Theodoroi derives from two horse-riding military saints of the early church, Theodore Teron (the “recruit”) and Theodore Stratelates (the “general”)—always mentioned together because both appeared in a vision to a fourth-century patriarch warning him of contaminated Lenten food.

The village is nestled at the foot of Mount Kastrí—or Arasiá, as they call it. While looming large when Demetrios was growing up, the village, in fact, had only two churches (one dedicated to Saint George, the other to the Dormition of our Lady) and a primary school, narrow streets with many water fountains, six grocery stores, and five or six cafés. He remembers the stone houses as well as olive trees—lots of olive trees!—and almond trees marching up and over the mountainside, while also sprawling in backyards to give shade to the residents in the summer heat. At the time there were 800 to 850 residents, most of them farmers and shepherds; but there were also shoemakers, traders, builders, and carpenters. There were even a few beekeepers—their hives supplying the sweetness for pastries dripping with honey. And the village abounded in oil and cheese, as well as a little wool. It was—at least in the memory of young Demetrios—an idyllic setting in an idyllic time. Today the island is known for its fishing and tourism, but in those previous years there was far less fishing and certainly no tourism. In fact, it was a rarity for fish even to be available in the markets.

As a child, and even after trips to the sophisticated city of Istanbul, Demetrios thought the villagers were shrewd and sharp. Without a doubt they were hardy and tough, albeit healthy and robust from their rigorous and natural lifestyle. Many of them would spend entire months in their farmsteads on the other side of the island, tending sheep and crops, returning to the village only for the major festivals or cold winter months.

But it was the olives that were the gold currency—literally the fortune—of the village and of the entire island. There were even two oil presses. In the fall, Demetrios would enjoy going with his friends to the presses, carrying some warm bread to dip in the oil. The Turkish name for Saints Theodores is Zeytinliköy (or Zeitinli), which means “olive-tree village.” Bartholomew recalls the women and men rising early to collect the olives—some reaching high on ladders, others sorting on the ground. They would break for lunch consisting of bread and cheese, olives, and sardines, then return home late, burdened with large canvas catching frames. The routine of collecting and returning home would be repeated every day, except Sundays, for two months.