Today, a diverse group of 99 religious and denominational organizations are urging Congress to maintain current law that protects houses of worship and other religious nonprofit organizations from political pressure and additional dangers that come with endorsing and opposing candidates.

The coalition is delivering a letter to House and Senate leaders April 4, reminding them that the current tax code safeguards “the integrity of our charitable sector and campaign finance system.” The Greek Orthodox Archdiocese of America stands among a representation of faith groups united in this cause.

The letter, addressed to leaders of both parties and of the committees dealing with tax law, reminds Congress that houses of worship already can speak to issues, and leaders can endorse or oppose candidates in their personal capacity. “Current law simply limits groups from being both a tax-exempt ministry and a partisan political entity,” the letter states.

The groups are united against any calls to repeal or change the so-called “Johnson Amendment,” which has become shorthand for a provision in the tax code that applies to all 501(c)(3) organizations. Groups that choose that most-favored tax status must refrain from endorsing, opposing or financially supporting political candidates.

The Greek Orthodox Archdiocese of America press release can be read here.

We, the 99 undersigned religious and denominational organizations strongly oppose any effort to weaken or eliminate protections that prohibit 501(c)(3) organizations, including houses of worship, from endorsing or opposing political candidates. Current law serves as a valuable safeguard for the integrity of our charitable sector (1) and campaign finance system. Some have suggested a desire to remove this safeguard only as it applies to houses of worship and to keep all other 501(c)(3) organizations at the status quo. This path, however, is constitutionally problematic under Texas Monthly v. Bullock, 489 U.S. 1 (1989).

Religious leaders often use their pulpits to address the moral and political issues of the day. They also can, in their personal capacities and without the resources of their houses of worship,  endorse and oppose political candidates. Houses of worship can engage in public debate on any issue, host candidate forums, engage in voter registration drives, encourage people to vote, help transport people to the polls and even, with a few boundaries, lobby on specific legislation and invite candidates to speak. Tax-exempt houses of worship may not, however, endorse or oppose candidates or use their tax-exempt donations to contribute to candidates’ campaigns. Current law simply limits groups from being both a tax-exempt ministry and a partisan political entity.

As religious organizations, we oppose any attempt to weaken the current protections offered by the 501(c)(3) campaign intervention prohibition because:

​The charitable sector, particularly houses of worship, should not become another cog in a political machine or another loophole in campaign finance laws. We strongly urge you to oppose any efforts to repeal or weaken protections in the law for 501(c)(3) organizations, including houses of worship.

Association of Welcoming and Affirming Baptists

Bend the Arc: A Jewish Partnership for Justice

Catholics in Alliance for the Common Good

Churchnet, a ministry of the Baptist General Convention of Missouri

The Jewish Federations of North America

National Advocacy Center of the Sisters of the Good Shepherd

The United Methodist Church, General Board of Church and Society

Cc: All Members of Congress 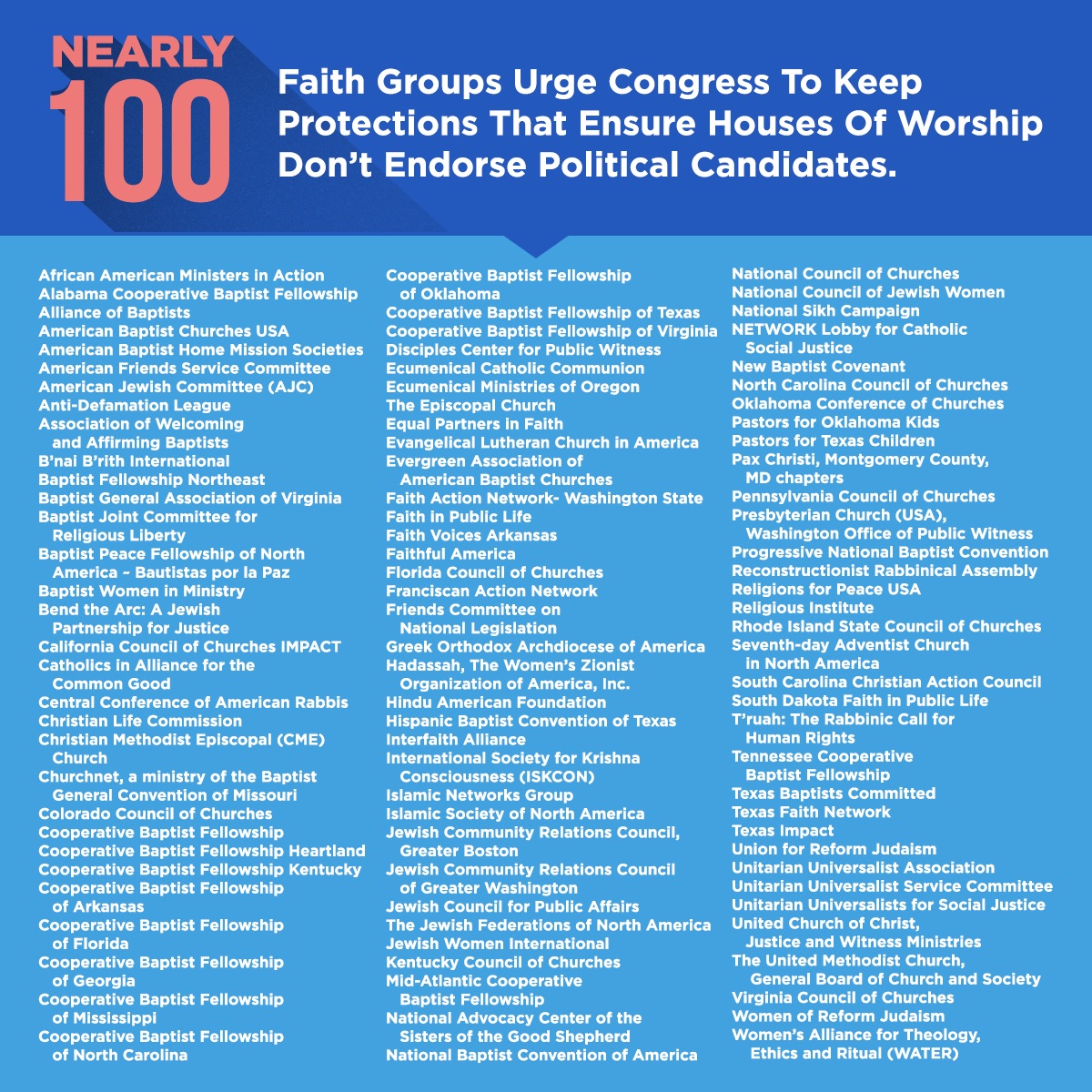