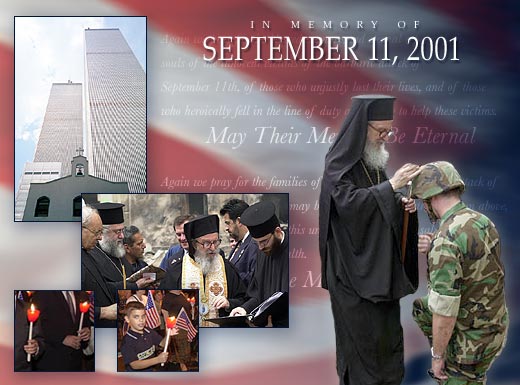 In the wake of the announcement of the agreement between the Greek Orthodox Archdiocese of America and the Port Authority of New York and New Jersey, announced by Governor Andrew Cuomo and Archbishop Demetrios earlier today, the Archdiocesan Council, in its semi-annual meeting in New York City, responded with a jubilant and prolonged standing ovation. The unanimous sense of the Archdiocesan Council was of great joy and gratitude that St. Nicholas Church has finally found its place, after 10 years of waiting, in the new reality of Ground Zero.
Read MoreAboutArchdiocesan Council Jubilant over Announcement of Saint Nicholas, Archbishop Demetrios Expresses Gratitude to Civic Leaders »

English Ελληνικά
On this Sunday, the tenth anniversary of the tragic events of September 11, 2001, we address you in the faith, love and hope that we share in our Lord Jesus Christ. As we gather in our places of worship on this day, we cannot help but call to mind the dreadful acts of terrorism and the tremendous destruction that shocked the entire world and burdened every heart with pain and sorrow.
Read MoreAboutEncyclical for the Ten Year Anniversary of September 11 (09/11/2011) »

Prayer for the Events of September 11

09/13/2001
Prayer offered by His Eminence Metropolitan Methodios at the Prayer Services at Boston City Hall, September 13, 2001
View »
Back

To Marshal the Dynamic of Faith

On September 11, 2001 we as a nation were exposed to evil in a way almost unimaginable. Without warning we were forced to face an evil that exacted a heavy toll on our citizens and nation Almost immediately the question "Where does evil come from" crept into our national dialogue.

The scriptures tell us that evil is without authorship. St. Gregory of Nyssa declares evil to be a presence that has grown as a tree without roots, like an herb that grew from no seed. Perhaps evil is a byproduct of the profound freedom that God has given to each of us. The great freedom to act in accordance with all that is decent or to live in opposition to all that is good.

This freedom, built into our very being, can allow conduct that steals away our innocence. Like Adam and Eve's selfishness and the misplaced envy of Cain our conduct can result in evil and diminish our innocence. The terror of September 11 was an assault on our national innocence--an innocence that allows us to see the inherent good in others. It is replaced with terror, insecurity, fear and mistrust,

It seems clear that the freedom of choice not only led to an assault on our innocence but was a chilling reminder that people, and even nations, can lose their moral compass. When a person loses his moral bearings he can inflict harm without reservation. We must now admit in light of the horror of September 11, that we live in a world where there is no moral equivalency. The persons who terrorized our nation do not share our moral framework. They chose to be immoral or even amoral.

The terrorists’ obvious lack of morality deprives them of the ability to see the sanctity and sacredness of life. The 5,000 plus victims in New York, Washington, D.C. and Pennsylvania speak of the cheapness of life in their amoral existence. How many innocent lives have now been changed forever by their actions and for what? To satisfy a need for power or to fulfill the obligations of a misplaced faith?

It makes us cry out for retribution, for justice The voices of the living and memory of the dead seem to be united in an expectation that those responsible will be held accountable They will be. We must, however, recognize that the cry for justice and retribution that wells up inside of us will be answered in God's time and in God's way,

Most of our citizens acknowledge that what has taken place on American soil in the past week was unimaginable. The unimaginable is now reality and we are a changed society. CNN commentator Jeff Greenfield lamented on the evening of September I that we will wake up on September 12 a different nation, changed forever by what we endured in these events.

The change most obvious to me is that our children will now live in a time of war. Whether declared or not, the war on terrorism will effect each child's view of the world. We are now called to put an end to terrorism for the sake and safety of our children. We must consciously and aggressively pray for peace, for our government, the armed forces and the American people. Our prayer must be for victory in the terrible conflict that lies ahead

In times of war or conflict we must call upon our generosity. At the memorial service for the victims held at the National Cathedral it was said that the offertory would be a moment of generosity. I suggest that we be generous not only in material gifts, but in love, tolerance, forgiveness, faith and sacrifice. Lastly, one thing will remain constant and unchanged by recent events--that is, the reality that we are a people of prayer, a people of faith. In times of war and peace we have sustained ourselves through prayer and faith. These will be our greatest weapons on the days ahead just as in times past. From the image of George Washington kneeling in prayer at Valley Forge to scenes of troops praying before their departure to the Gulf War we have a history as a people of faith, a nation of prayer. Let us, therefore marshal the dynamic of faith and the Power Of Prayer in this time of national emergency.

David, the Old Testament King and Prophet has given us the words we need at this time and they are found in the 27th Psalm:

The Lord is my light and my salvation,
Whom shall I fear?
The Lord is the strength of my life;
Of whom shall I be afraid?
When the wicked came against me
To eat up my flesh,
My enemies and foes,
They stumbled and fell.
Though an army may encamp against me,
My heart shall not fear;
Though war may rise against me,
In this I will be confident.
One thing I have desired of the Lord,
That will I seek:
That I may dwell in the house of the Lord
All the days of my life,
To behold the beauty of the Lord,
And to inquire in His temple.
For in the time of trouble
He shall hide me in His pavilion;
In the secret place of His tabernacle
He shall hide me;
He shall set me high upon a rock.
And now my head shall be
lifted up above my enemies
all around me;
Therefore I will offer sacrifices
I will sing, yes, I will sing praises to the Lord.