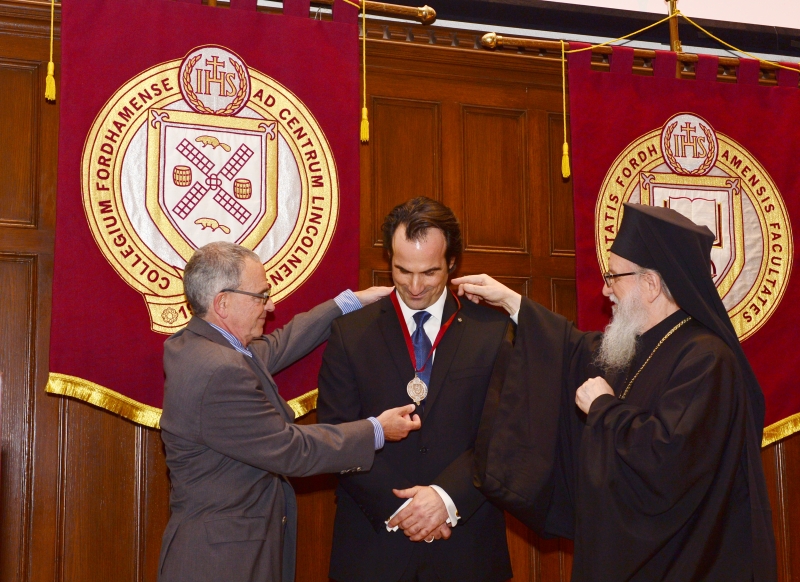 The University organized a public ceremony at their Rose Hill Campus to mark the event which was followed by the inaugural lecture by Prof. Papanikolaou on the subject “Violence and Virtue.”

The Archbishop Demetrios Chair in Orthodox Theology and Culture was established at Fordham University in 2009 with a most generous gift of two million dollars from Mary and Michael Jaharis through the Jaharis Family Foundation Inc. The endowed chair which was established in honor of His Eminence Archbishop Demetrios of America is only the latest development in a long progression for Orthodox Christian studies in Fordham. When Fordham initiated the Annual Orthodoxy in America Lecture Series in 2004, it was Archbishop Demetrios who presented the inaugural lecture. In June 2007 Fordham bestowed an honorary doctorate of humane letters upon the Archbishop. The Orthodox Christian Studies Center of Fordham University is the only one of its kind, not only in the United States but probably worldwide. It was co-founded by Professors George Demacopoulos and Aristotle Papanikolaou, both graduates of Holy Cross Greek Orthodox School of Theology.

University President Fr. Joseph M. McShane, S.J., expressed his deep appreciation to Michael and Mary Jaharis for their generous gift, spoke highly of Archbishop Demetrios and praised Prof. Papanikolaou’s qualities and qualifications. The formal installation ceremony followed and Fr. McShane asked His Eminence together with the Provost Dr. Freedman to bestow upon Prof. Papanikolaou the University’s special medal in recognition of his ground-breaking scholarship.

Dr. Papanikolaou began his inaugural lecture with a personal tone expressing gratitude to members of his family and especially his immigrant grandmother who instilled in him her faith and wisdom. He also acknowledged the influence and support of many mentors and colleagues along the way. In his lecture he discussed how the Eastern Christian thinking on virtue offers resources for illuminating and transfiguring the human experience of violence.

Archbishop Demetrios, who concluded the evening with a prayer, expressed his sincere gratitude to Mary and Michael Jaharis, praised the vision and stewardship of Fr. McShane and the scholarship of his old student Professor Papanikolaou. “We are celebrating this achievement today,” His Eminence said, “as Fordham University has shown once again what it is to advance knowledge, human experience and the Ecumenical Christian spirit.”

The Master of Ceremonies was Roger A. Milici, Jr., the Vice President for Development and University Relations; the invocation was given by Monsignor Joseph G. Quinn, Vice President for University Mission and Ministry; the Provost Dr. Stephen Freedman offered the welcome; and Dr John Harington, the Dean of Arts and Sciences Faculty offered greetings. Among the many guests in attendance were the great benefactor Michael Jaharis, His Grace Bishop Sevastianos of Zela, the National Philoptochos President Aphrodite Skeadas, Fr. Robert Stephanopoulos, former dean of the Holy Trinity Cathedral in New York, the Consul General of Cyprus in New York Koula Sofianou and George Venizelos, assistant director of the FBI (New York) and Fordham alumnus.