Orthodoxy and Other Faith Traditions 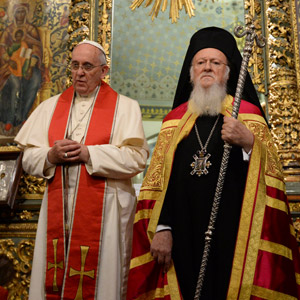 New York, NY - Over 250 million Orthodox Christians worldwide, including some six million in North America, will celebrate the Triumph of Orthodoxy on the First Sunday of Great Lent, March 4th, to commemorate the restoration of Holy Icons to the Church in the Ninth Century.

Orthodox Christians will begin observing the Great Lent on Monday, February 26th, in preparation for Easter, the most sacred and holy day of the Orthodox Churchs ecclesiastical year. This year Easter, for the Christian Churches of the Eastern and Western traditions, will be celebrated on April 15th.

His Eminence Archbishop Demetrios, spiritual leader of the Greek Orthodox Church in America and Chairman of the Standing Conference of Canonical Orthodox Bishops in the Americas (SCOBA) will con-celebrate the Archierarchal Divine Liturgy on the Sunday of Orthodoxy with fellow SCOBA hierarchs at the Greek Orthodox Archdiocesan Cathedral of the Holy Trinity in New York City (319 East 74th St.) beginning at 9:30 a.m. His Eminence Metropolitan Christopher of the Serbian Orthodox Church in the United States and Canada, will preach the Homily,Orthodox seminarians will chant the Matins and the Cathedral Choir, directed by Dr. Dino Anagnost, will sing the hymns and responses of the Liturgy. Similar Orthodox services will be celebrated throughout the world on that day.

In their Sunday of Orthodoxy encyclical to the faithful the SCOBA hierarchs state: As we observe this season of Holy Lent in prayer and fasting, as we anticipate its culmination in the joyous light of Pascha, and as we affirm unity in our tradition, worship and faith, we exhort you, the faithful, following the God-inspired words of Saint Paul, to  put on compassion, kindness, humility, meekness and patience, forbearing one anotherand forgiving each other, (Colossians 3:12).

The Orthodox Christian Lent always begins on the Monday February 26th,before the Sunday of Orthodoxy. It is designated as Clean Monday, the Monday of cleansing or purification. On that day Orthodox faithful are required to begin a spiritual and moral purification through fasting, prayer, meditation, repentance, attending Lenten religious services and partaking of the Sacraments of Confession and Communion.

Religious services during the Lenten period are especially beloved by Orthodox faithful. They include the Compline, the Liturgy of the Presanctified Gifts, the Salutations to the Virgin Mary and the Divine Liturgy of St. Basil compiled in the 4th Century.

The historical significance of the Sunday of Orthodoxy dates to 787 A.D. when the Fathers of the Seventh Ecumenical Council of Nicaea decreed the restoration of the icons as a means for the spiritual growth and formation of the Christian ethos and character in the likeness and image of God and His Saints. In 843 A.D. when the icons were finally restored in the churches, the first Sunday of Lent was designated as a day for thanksgiving and doxology. It came to be known as the Sunday of Orthodoxy, calling the faithful to a rededication to the Orthodox Christian faith, as received from the Apostles. The Declaration of Faith is recited by the clergy and the congregation following a Procession of Icons throughout the Church.

Highlighting the celebration of the Sunday of Orthodoxy at Holy Trinity Cathedral will be the participation of 100 young adults from the various SCOBA jurisdictions in the Divine Liturgy. Arranged by the Youth Departments of the SCOBA members, 20 of the young people will take part in the Procession of Icons. Following the Service, the young people will gather in the Cathedral Center for a Dialogue with the SCOBA Hierarchs.

Metropolitan Christopher, Serbian Orthodox Church in the U.S. and Canada