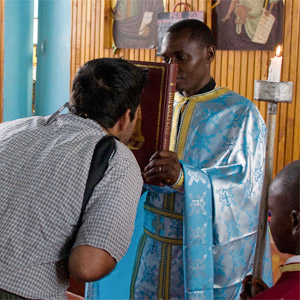 OCMC Honored And Blessed By Official Visit Of Hierarchs And Faithful

On Saturday, February 22, 2003 the Orthodox Christian Mission Center was blessed by the presence of His Eminence Archbishop Demetrios of America, three Metropolitans, the founding director of the Mission Center and members of the Archbishop Iakovos Leadership 100 Endowment Fund.

Archbishop Demetrios, Primate of the Greek Orthodox Church in America and Chairman of the Standing Conference of Canonical Orthodox Bishops, along with Metropolitan Iakovos of Chicago, Metropolitan Anthony of San Francisco, Metropolitan Alexios of Atlanta, Bishop Dimitrios of Xanthos and 70 members of Leadership 100 made an official visit to the Orthodox Christian Mission Center in St. Augustine, Florida. The visit was in conjunction with the 12th Annual Leadership 100 Conference which was held February 19-23 in Amelia Island, Florida.

Leadership 100 is a group of benefactors who are dedicated to seeding and nurturing ministries that advance the Orthodox faith. The Orthodox Christian Mission Center is the second largest recipient of grants from Leadership 100, having received over $700,000 for the establishment and support of various missions programs.

“This visit was a great encouragement for all of us at the Mission Center,” said Father Martin Ritsi, OCMC’s Executive Director. “We are honored and strengthened by the visitation of the Archbishop and the other hierarchs along with the members of Leadership 100 who came to see the Mission Center.”

Small group tours of the Mission Center were followed by refreshments and a general welcome by Fr. Martin Ritsi. His Eminence Archbishop Demetrios then addressed all those present with words of thanks, encouragement and endorsement for the ministries of OCMC.

“We all have to grow in our understanding of how missions are essential to the faith of Orthodox Christianity and not just an appendix.” His Eminence said to those present. “Much of the work being done here at the Mission Center is made possible by the investment and support of donors like you.”

Through out his talk the Archbishop presented different parts of the world involved in missions. He spoke first about Korea, praising it as a “wonderful modern example of mission work”. He spoke about the exciting growth being seen all over Africa especially supported by OCMC’s Support A Mission Priest program. His Eminence also spoke of the good work being done in places like Albania by missionaries and mission teams.

For many of the guests this was their first visit to the Orthodox Christian Mission Center. As the people left they expressed excitement and interest in seeing the depth and extent of OCMC’s ministry to bring the message of Christ’s salvation and love to the ends of the earth.