Official Message of the Holy Council 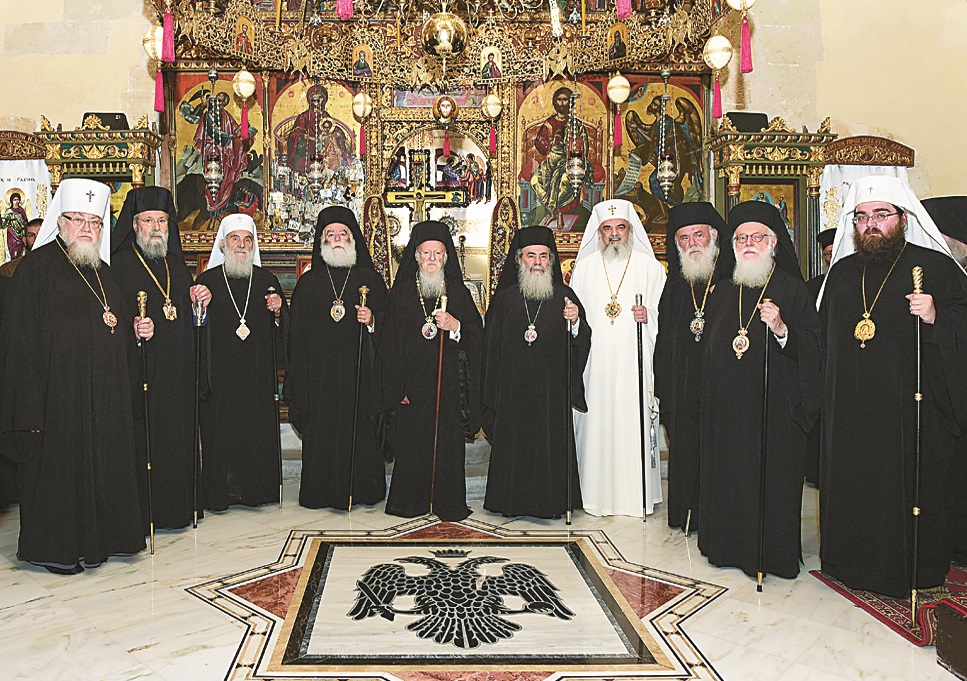 ​To the Orthodox people and to all people of good will To God,

“the Father of mercies and all comfort,” we address a hymn of thanksgiving and praise for having enabled us to gather during the week of Pentecost (18-26 June 2016) on Crete, where the Apostle Paul and his disciple Titus preached the Gospel in the early years of the life of the Church. We give thanks to the Triune God who was well pleased that in one accord we should bring to a conclusion the work of the Holy and Great Council that was convoked by His All Holiness Ecumenical Patriarch Bartholomew by the common will of their Beatitudes the Primates of the local Orthodox Autocephalous Churches. Faithfully following the example of the Apostles and our god-bearing Fathers we have once again studied the Gospel of freedom “for which Christ has set us free” (Gal. 5: 1). The foundation of our theological discussions was the certainty that the Church does not live for herself. She transmits the witness of the Gospel of grace and truth and offers to the whole world the gifts of God: love, peace, justice, reconciliation, the power of the Cross and of the Resurrection and the expectation of eternal life.

1) The key priority of the Council was to proclaim the unity of the Orthodox Church. Founded on the Eucharist and the Apostolic Succession of her Bishops, the existing unity needs to be strengthened and to bear new fruits. The One Holy Catholic and Apostolic Church is a divine-human communion, a foretaste and experience of the eschaton within the Holy Eucharist. As a continuous Pentecost, she is a prophetic voice that cannot be silenced, the presence of and witness to the Kingdom of the God of love.The Orthodox Church, faithful to the unanimous Apostolic Tradition and her sacramental experience, is the authentic continuation of the one Holy Catholic and Apostolic Church as confessed in the Creed and confirmed by the teaching of the Church Fathers. Our Church lives out the mystery of the Divine Economy in her sacramental life, with the Holy Eucharist at its center.

The Orthodox Church expresses her unity and catholicity “in Council”. Conciliarity pervades her organization, the way decisions are taken and determines her path. The Orthodox Autocephalous Churches do not constitute a federation of Churches, but the One Holy Catholic and Apostolic Church. Each local Church as she offers the holy Eucharist is the local presence and manifestation of the One Holy Catholic and Apostolic Church.

In regard to the Orthodox Diaspora in various countries of the world, it was decided to continue with the institution of Episcopal Assemblies until such time as canonical rigor can be implemented. These assemblies are composed of the canonical bishops appointed by each Autocephalous Church and these bishops continue to remain subject to their respective Churches. The due function of these Episcopal Assemblies guarantees respect for the Orthodox principle of conciliarity.

2) Participating in the Holy Eucharist and praying for the whole world, we must continue the ‘liturgy after the Divine Liturgy’ and give the witness of faith to those near and those far off, in accordance with the Lord’s clear command before His ascension, “And you shall be my witnesses in Jerusalem and in all Judea and Samaria and to the end of the earth” (Acts 1: 8) The re-evangelization of God’s people in modern, secularized societies and the evangelization of those who have still not come to know Christ remain an unceasing obligation for the Church.

3) In response to her obligation to witness to the truth and her apostolic faith, our Church attaches great importance to dialogue, primarily with non Orthodox Christians. In this way the remainder of the Christian world comes to know more precisely the authenticity of the Orthodox Tradition, the value of patristic teaching and the liturgical life and faith of the Orthodox. The dialogues conducted by the Orthodox Church never imply a compromise in matters of faith.

4) The explosions of fundamentalism observed within various religions represent an expression of morbid religiosity. Sober inter-religious dialogue helps significantly to promote mutual trust, peace and reconciliation. The oil of religious experience must be used to heal wounds and not to rekindle the fire of military conflicts. The Orthodox Church unequivocally condemns the extension of military violence, persecutions, the expulsion and murder of members of religious minorities, forced conversions, the trafficking of refugees, the abductions, torture and abhorrent executions. She denounces the destruction of churches, religious symbols and cultural monuments.

Very particularly, she expresses her deep concern about the situation of Christians and of all the persecuted minorities in the Middle East. She calls on the governments in the region to protect the indigenous Orthodox and other Christians and all the populations who have an inalienable right to remain in their countries as citizens with equal rights. Our Council appeals to all parties involved to make systematic efforts without delay to bring to an end the military conflicts in the Middle East and wherever armed hostilities persist and to enable all those displaced to return to their homes. We address our appeal particularly to those in positions of power to act so that peace and justice may prevail in the countries of origin of the refugees. We urge the civil authorities, the citizens and the Orthodox Christians in the countries in which the persecuted are taking refuge to continue to offer help to the limit or even beyond the limit of their abilities.

5) Modern secularisation seeks the autonomy of man (anthropos) from Christ and from the spiritual influence of the Church, which it arbitrarily identifies with conservatism. Western civilization, however, bears the indelible mark of the diachronic contribution of Christianity. The Church, moreover, highlights the saving significance of Christ, the God-man, and of His Body, as the place and mode of life in freedom.

6) In contrast to the contemporary approach to marriage, the Orthodox Church regards the indissoluble loving relationship of man and woman as “a great mystery... of Christ and the Church”. Similarly, she calls the family which springs from this and which constitutes the only guarantee for the upbringing of children a “little church”. The Church has always emphasized the value of self-restraint. Christian asceticism, however, differs radically from every dualistic asceticism which severs man from life and from his fellow man. On the contrary, she connects this with the sacramental life of the Church. Self-restraint does not concern only the monastic life. The ascetic ethos is a characteristic of Christian life in all its manifestations.

Apart from the specific topics about which it decided, the Holy and Great Council notes in brief the following important contemporary issues:

7) In regard to the matter of the relations between Christian faith and the natural sciences, the Orthodox Church avoids placing scientific investigation under tutelage and does not adopt a position on every scientific question. She thanks God who gives to scientists the gift of uncovering unknown dimensions of divine creation.

The modern development of the natural sciences and of technology is bringing radical changes to our life. It brings significant benefits, such as the facilitation of everyday life, the treatment of serious diseases, easier communications and space exploration, and so on.

In spite of this, however, there are many negative consequences such as the manipulation of freedom, the gradual loss of precious traditions, the destruction of the natural environment and the questioning of moral values. Scientific knowledge, however swiftly it may be advancing, does not motivate man’s will, nor does it give answers to serious moral and existential issues and to the search for the meaning of life and of the world. These matters demand a spiritual approach, which the Orthodox Church attempts to provide through a bioethics which is founded on Christian ethics and Patristic teaching. Along with her respect for the freedom of scientific investigation, the Orthodox Church at the same time points out the dangers concealed in certain scientific achievements and emphasizes man’s dignity and his divine destiny.

8) It is clear that the present-day ecological crisis is due to spiritual and moral causes. Its roots are connected with greed, avarice and egoism, which lead to the thoughtless use of natural resources, the filling of the atmosphere with damaging pollutants, and to climate change. The Christian response to the problem demands repentance for the abuses, an ascetic frame of mind as an antidote to overconsumption, and at the same time a cultivation of the consciousness that man is a “steward” and not a possessor of creation. The Church never ceases to emphasize that future generations also have a right to the the natural resources that the Creator has given us. For this reason, the Orthodox Church takes an active part in the various international ecological initiatives and has ordained the 1st September as a day of prayer for the protection of the natural environment.

9) Against the leveling and impersonal standardization that is promoted in so many ways, Orthodoxy proposes respect for the particular characteristics of individuals peoples. It is also opposed the making of the economy into something autonomous from basic human needs and turning it into an end in itself. The progress of mankind is not connected only with an increase in living standards or with economic development at the expense of spiritual values.

10) The Orthodox Church does not involve herself in politics. Her voice remains distinct, but also prophetic, as a beneficial intervention for the sake of man. Human rights today are at the center of politics as a response to the social and political crises and upheavals, and seek to protect the citizen from the arbitrary power of the state. Our Church also adds to this the obligations and responsibilities of the citizens and the need for constant self-criticism on the part of both politicians and citizens for the improvement of society. And above all she emphasises that the Orthodox ideal in respect of man transcends the horizon of established human rights and that “greatest of all is love,” as Christ revealed and as all the faithful who follow him have experienced. She insists also that a fundamental human right is the protection of religious freedom--namely, freedom of conscience, belief, and religion, including, alone and in community, in private and in public, the right to freedom of worship and practice, the right to manifest one’s religion, as well as the right of religious communities to religious education and to the full function and exercise of their religious duties, without any form of direct or indirect interference by the state.

11) The Orthodox Church addresses herself to young people who seek for a plenitude of life replete with freedom, justice, creativity and also love. She invites them to join themselves consciously with the Church of Him who is Truth and Life. To come, offering to the ecclesial body their vitality, their anxieties, their concerns and their expectations. Young people are not only the future, but also the dynamic and creative present of the Church, both on a local and on a world-wide level.

12) The Holy and Great Council has opened our horizon towards the contemporary diverse and multifarious world. It has emphasized our responsibility in place and in time, ever with the perspective of eternity. The Orthodox Church, preserving intact her Sacramental and Soteriological character, is sensitive to the pain, the distress and the cry for justice and peace of the peoples of the world. She “proclaims day after day the good tidings of His salvation, announcing His glory among the nations and His wonders among all peoples” (Psalm 95). Let us pray that “the God of all grace, who has called us to his eternal glory in Christ, will, after we have suffered a little, Himself restore, establish, and strengthen and settle us. To him be glory and dominion for ever and ever. Amen” (1 Peter 5.10-11).