His Beatitude Patriarch Theodoros II presents a replica of the Cathedral of St. George in Cairo— the "the dream of my life” and a parallel to the cathedral of the same name at the Phanar— to His Eminence Archbishop Elpidophoros after the Doxology at the Greek Orthodox Archdiocese of America.
© Photo Credits: GOARCH / Dimitrios S. Panagos
A. Antzoulatos

NEW YORK — Thursday, October 6,  marked the first full day of the Apostolic visit of His Beatitude Theodoros II, Patriarch and Pope of Alexandria and all Africa, to the United States. In the morning, His Beatitude met with His Eminence Timothy Cardinal Dolan, Catholic Archbishop of New York, and His Eminence Archbishop Borys Gudziak, of the Ukrainian Catholic Archeparchy of Philadelphia. Patriarch Theodoros was accompanied by His Eminence Archbishop Elpidophoros of America, Their Eminences Metropolitans George of Guinea and Nikodimos of Memphis, and Sub-Deacon Moses Kariuki Maina. Over an intimate breakfast at the Cardinal's residence, they discussed ecumenical and interfaith relations between both traditions and within their respective jurisdictions, as well as the state of Orthodoxy in Africa.

After the service, Archbishop Elpidophoros addressed His Beatitude, stating, “This Apostolic Visit to the United States – a first for the See of the Holy Evangelist Mark – is a tremendous honor for our Eparchy of the Mother Church of Constantinople, as well as for the beloved Order of Saint Andrew, Archons of the Ecumenical Patriarchate. We pray that Your Beatitude’s stay in the United States will be a rewarding one, filled with purpose and spiritual satisfaction. All of us here at the Archdiocese and throughout the Omogeneia are at Your disposal to make this First Apostolic Visit – which coincides with Your Beatitude’s Anniversary of Election – as meaningful as possible.

“We are most enthused for this Apostolic Visit and for the many opportunities to hear from Your Beatitude. We welcome You with open arms and open hearts. With the utmost respect and deepest reverence. And with joyous anticipation of receiving Your Apostolic Blessing,” the Archbishop said, presenting His Beatitude with a special Archdiocesan Centennial icon of the Sower. (Full Remarks)

Patriarch Theodoros expressed his heartfelt thanks to the Archbishop: “You opened the door of your heart and received me today.” He also presented His Eminence with a replica of the Cathedral of St. George in Cairo, the "the dream of my life” and a parallel to the cathedral of the same name at the Phanar.

Then, turning to the faithful, His Beatitude said, “I will have more strength because I will remember your faces, all these blessed people who are here today; the blessing of His All-Holiness Ecumenical Patriarch Bartholomew; Archbishop Elpidophoros; Your Eminences; the Archons; Ambassadors; and all these memories will give me strength to continue the hard work of my missionary work in Africa.”

Afterward, a number of inter-Orthodox, ecumenical, and interfaith leaders— many of whom also attended the Doxology Service— honored Patriarch Theodoros at a special lunch at the Archdiocese. Among them were His Excellency Archbishop Gabriele G. Caccia (Representative of the Holy See to the UN), His Eminence Metropolitan Zachariah Mar Nicholovos (Malankara Syrian Orthodox Church), His Eminence Archbishop Anoushavan Tanielian (Armenian Orthodox Church-Holy See of Cilicia), The Rev. Bishop Paul Egensteiner (Evangelical Lutheran Church in America), Rev. Cyril Antonios (Coptic Orthodox Church), V. Rev. Fr. Gabriel Adde (Syriac Orthodox Church), and a number of representatives from the Assembly of Bishops, including His Grace Bishop Irinej.

Tomorrow, October 7, His Beatitude is expected to meet with members of the Omogeneia, including the National Ladies’ Philoptochos Society and the students and parishioners of St. Nicholas Greek Orthodox Church in Flushing. His Beatitude will also attend the Nicholas J. Bouras Award ceremony and banquet, hosted annually by the Archons of the Ecumenical Patriarchate.

Details regarding His Beatitude's schedule during the 2022 U.S. visit will be updated at www.goarch.org/news/archbishop/schedule 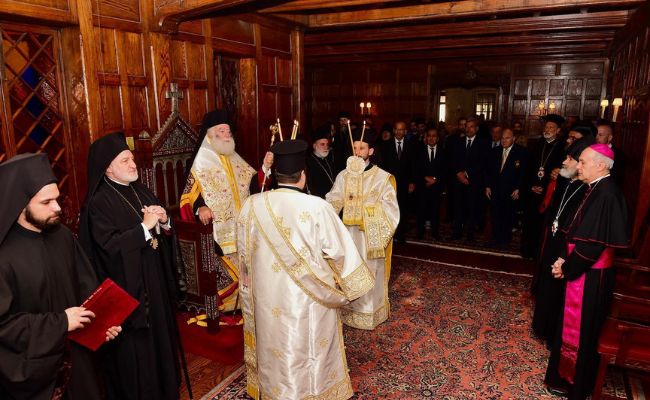 Doxology at the Greek Orthodox Archdiocese of America.