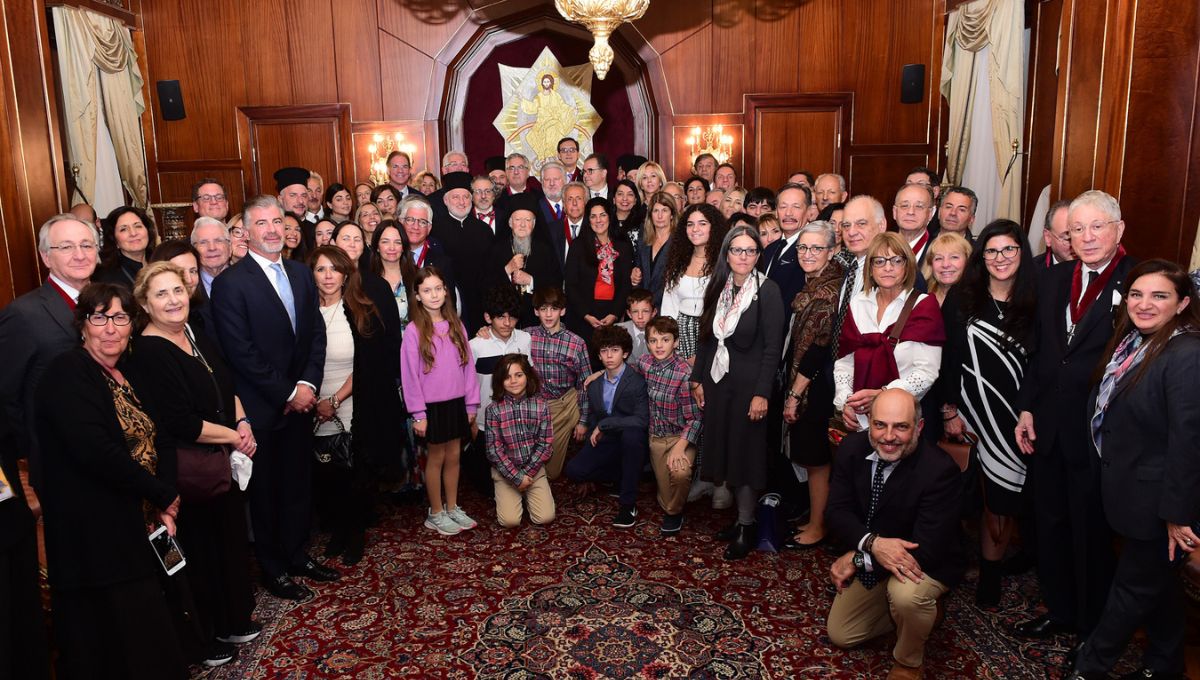 ISTANBUL — On the eve of the Feast Day of St. Andrew on Monday, two new Archons were inaugurated at the Phanar. Participants of the Fourth GOARCH Centennial Pilgrimage attended the investiture, sharing in the joyous celebration as a members from their own group took their place among the new Archons: Dr. Georgios Syros, Assistant Professor of Medicine and the Director of Arrhythmia Services at Mount Sinai, and Dr. John Thomas, MD, surgeon at Mount Sinai Queens.  Dr. George Dangas, professor of medicine at the Mount Sinai School of Medicine and Director of Cardiovascular Innovation and Dr. Stamatios Lerakis, professor of Medicine and Director of Noninvasive Cardiology for Mount Sinai Heart, were inaugurated during the Order of St. Andrew, Archons of the Ecumenical Patriarchate weekend event in October 2022, however they traveled to the Ecumenical Patriarchate where the four doctors received the personal blessing of His All-Holiness Ecumenical Patriarch Bartholomew.  All four doctors had treated His All-Holiness and performed his stent surgery last November during the Apostolic Visit to the United States.

“We are well aware of the fact,” His All-Holiness Ecumenical Patriarch Bartholomew said, “that even when you are physically far away from us, you still carry deeply in your heart the spirit and the ethos of the sacred center of the Mother Church, and you have its values as a source of inspiration and spiritual guidelines in your personal life and professional activities.

“We especially value and wholeheartedly congratulate you for your ardent commitment to the defense of the freedom of religion— the first and highest protected right in the American constitutional tradition and culture— which has a significant impact on the everyday life and the vision of the mother church of Constantinople.”

His Eminence Archbishop Elpidophoros thanked the Ecumenical Patriarch for the “honor and the fatherly love that you have bestowed to four of our distinguished doctors in the United States,” and expressed the gratitude of the Omogeneia for such “globally distinguished” scientists.

The purpose of this fourth and last pilgrimage of 2022, His Eminence said, was to pay respects and offer gratitude to the Mother Church for its establishment of the Archdiocese 100 years ago. It was its prophetic vision— “its prophetic χάρισμα, a gift from the Holy Spirit,” which gives the Ecumenical Patriarchate the ability to “see what’s coming”: in 1922, it saw ahead to the Catastrophe of Asia Minor and established Archdioceses around the world as new homes for its children, who would soon be refugees; then again, in the 21st century, it provided “ecclesiastical shelter” for its spiritual children in Ukraine when it granted autocephaly to the canonical Church of Ukraine.

On Tuesday, the pilgrimage group attended the Divine Liturgy of the Feast Day of Saint Andrew, patron saint of the Ecumenical Patriarchate. The group continued on to the Holy Land in Jerusalem later this week.