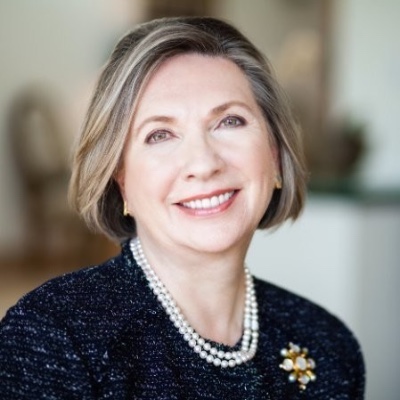 Seasoned Economist, Lawyer, Philanthropist to Lead Board of Humanitarian and Development Agency

Baltimore, Md. - The Board of Directors of International Orthodox Christian Charities (IOCC) elected Jasmina T. Boulanger of Orange County, California, as Chairman of the Board at its October 2020 biannual meeting. Mrs. Boulanger is the first woman elected Chairman of the Board of IOCC. She succeeds Mark Stavropoulos of Michigan, who successfully completed six years as Chairman, the maximum allowed by the organization’s charter.

“It’s a tremendous honor to serve IOCC in this new role,” said Boulanger. “I’m humbled to be part of IOCC’s impactful work, alongside dedicated staff and volunteers in the States and overseas. I’m excited about what we will accomplish together.”

To the role of Chairman, Boulanger brings a wealth of executive experience in the private sector. For more than 30 years, she has practiced corporate and tax law in the US and Europe and has held senior executive and leadership positions at a variety of public companies, including Unocal, Valeant, and Conexant Systems. She has also served the nonprofit community as Vice Chair of the City of Pasadena Planning Commission, Trustee of Assumption University, and President of the Serbian Unity Congress.

New officers who will serve alongside Boulanger are, as Vice Chairman, Dr. Frank Cerra; as Treasurer, Dimitri Zgourides; and as Secretary, Gayle Malone. The board also welcomes three new members: Kimberly Adams-Angelos, Demetri Papacostas, and the Very Rev. Michael Ellias. Each brings valued skills and experience to IOCC’s governing body.

Despite challenges posed by the global pandemic throughout 2020, IOCC has remained active, taking steps to both safely continue meeting needs worldwide and to position itself for ongoing service in the changed humanitarian landscape. Recent initiatives include emergency response to the Beirut explosion of August 4, 2020, and digitized resources for emotional and spiritual care under its disaster-focused US Program.

International Orthodox Christian Charities (IOCC) is the humanitarian relief and development agency of the Assembly of Canonical Bishops of the United States of America. Since its inception in 1992, IOCC has provided more than $715 million in humanitarian relief and sustainable development programs in over 60 countries worldwide. Today, IOCC applies its expertise in humanitarian response to natural and manmade crises in Africa, Europe, the Middle East, and the United States, offering assistance based solely on need. Learn more at iocc.org and follow @IOCCRelief on Twitter, Instagram, and Facebook.