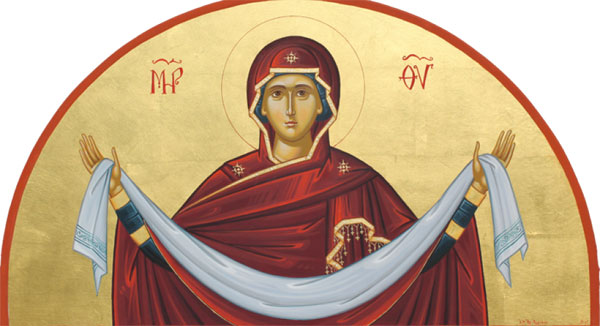 Feast of the Holy Protection of the Theotokos
OXI Day

Our commemoration of OXI Day each year leads us to reflect on a very challenging time in our world and for the people of Greece.  As war was spreading throughout Europe, the Axis forces demanded the surrender of Greece on October 28, 1940.  Bravely and honorably, the Greek people replied, “NO.”   Today, we honor the bravery and sacrifice of our fathers and mothers who stood valiantly against the armies of the fascist powers.  They proclaimed a resolute “NO” to occupation.  The people of Greece affirmed their love of liberty and their right of self-determination.  They saw the evil and unchecked power of fascist regimes, and in their response they committed their lives to protecting their country.  In faith they knew that no matter the outcome they were willing to stand courageously in the face of this threat knowing that ultimately nothing could separate them from the nobility of their heritage and the love of God.

Today, we are inspired by our forbearers as we celebrate their courage and honor their memory.  They said “NO” to those who advanced power and control at any cost.  They stood firm against an ideology and its forces that would only separate them from their freedom, their rights, and their way of life.  We find courage in their example and hope and strength in the promise that neither death, nor life, nor angels, nor principalities, nor things present, nor things to come, nor powers, nor height, nor depth, nor anything else in all creation will be able to separate us from the love of God in Christ Jesus (Romans 8:38-39).

The experience of God’s love and the promise that His love is always with us helped the people of Greece in hope and faith to endure all things (I Corinthians 13:7).  They knew that the power of God’s love was greater than the power of fascist regimes.  They knew that the love of God was essential to their freedom, and to their love for their families and communities, and for their country.

With the assurance and truth of God’s love, we are able to stand firm against any evil use of power or false ideology.  As the people of Greece in 1940 and as many witnesses of our faith have done, we can boldly proclaim “NO” in the face of those who seek to destroy life and liberty, those who use power to abuse and manipulate others, and those who try to separate us from our faith and the love of God.

As we commemorate the valiant people of Greece on OXI Day, and we laud their courage before the world, may we give thanks to God for the witness offered to us and to generations to come.  May we also pray for the eternal memory and blessed repose of those who stood heroically for their faith and their nation.  May we be inspired to stand firmly in the love of God, knowing that nothing can separate us from the great and saving love we have in Him through Christ Jesus.

With paternal love in Him,