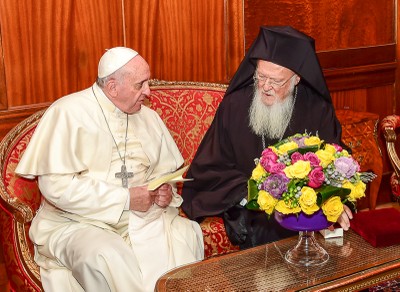 The article starts with the words of His All-Holiness as follows:

In a series of seminars organized between 1994 and 1998 on the island of Halki off the coast of Istanbul in Turkey, we drew attention to the close connection between ecology and economy. Both terms share the Greek root oikos, which signifies “home.” It therefore came as no surprise to us that our beloved brother Francis of Rome opens his encyclical, which is being released today in the New Synod Hall of the Vatican, with a reference to God’s creation as “our common home.”

His All-Holiness Ecumenical Patriarch Bartholomew “has been the first one in the Christian world to draw the attention of the world community to the seriousness of the ecological problem and the duty of the Church to voice its concern and try to contribute with all the spiritual means at its disposal towards the protection of our natural environment,” said His Eminence Metropolitan John (Zizioulas) of Pergamon, who represented the Ecumenical Patriarch at the presentation of the Pope’s Encyclical.

“The issuing of the Encyclical Laudato Si’ is, therefore, an occasion of great joy and satisfaction for the Orthodox,” said Metropolitan John.  “On behalf of them I should like to express our deep gratitude to His Holiness for raising his authoritative voice to draw the attention of the world to the urgent need to protect God’s creation from the damage we humans inflict on it with our behavior towards nature.”

He said the Encyclical comes at a “critical moment in human history” and will “undoubtedly have a worldwide effect on people’s consciousness.”