Ecumenical Patriarch Bartholomew Meets with Speaker of the House 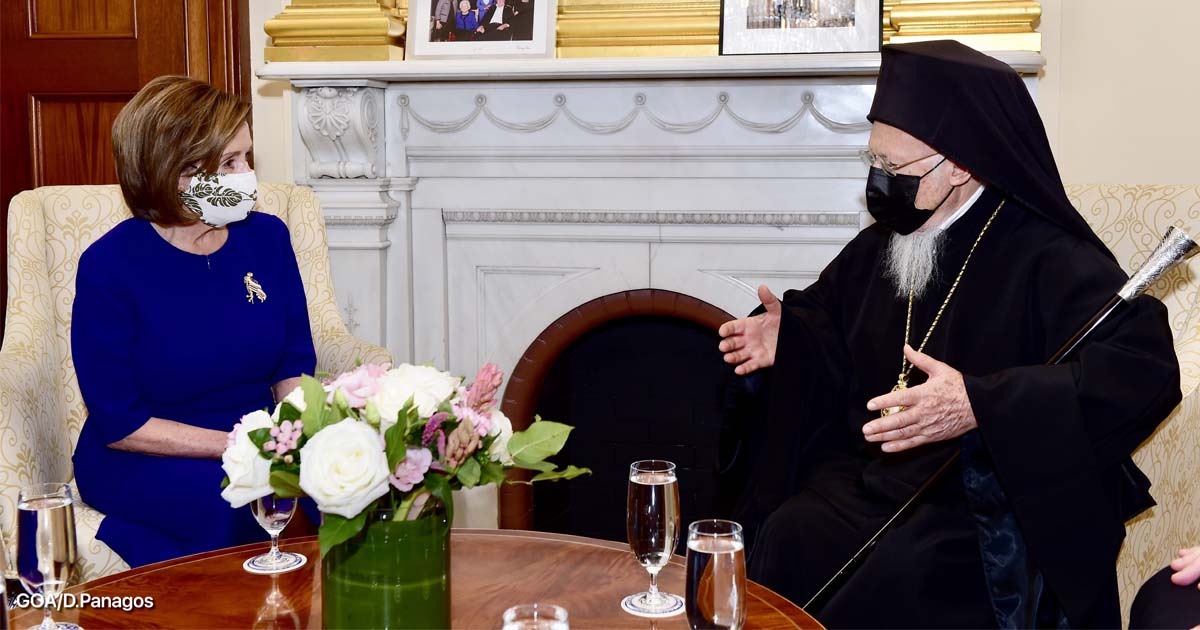 WASHINGTON, DC — His All-Holiness Ecumenical Patriarch Bartholomew met with Speaker of the House Nancy Pelosi at the Capitol today, October 26, 2021. Also present at the meeting were Elder Metropolitan Emmanuel of Chalcedon and Archbishop Elpidophoros of America.

During the meeting, His All-Holiness recalled the honor of receiving the Congressional Gold Medal during his first official visit to the United States in 1997, adding how proud he is to share this honor now with the honorable United States Capitol Police and those who protected the U.S. Capitol on January 6, 2021.

The Ecumenical Patriarch also expressed appreciation to President Biden and Speaker Pelosi for the ongoing commitment of the United States to religious liberty and freedom of conscience around the world. He further discussed with Speaker Pelosi the urgent need of supporting developing nations to secure vaccines for their populations.

After the meeting, Speaker Pelosi hosted a luncheon in the Rayburn Room, attended by a bipartisan group of Members of Congress. Senator Chuck Schumer (D-NY) delivered remarks on the Apostolic Visit of His All-Holiness. (Remarks here)

Earlier in the day, the Ecumenical Patriarch, Archbishop Elpidophoros, and the Official Delegation attended an ecumenical reception at the United Methodist Building, hosted by the National Council of Churches in honor of the Apostolic Visit. His All-Holiness was greeted by NCC President and General Secretary Jim Winkler as well as Chair of the NCC Governing Board Bishop Teresa Jefferson-Snorton from the Christian Methodist Episcopal Church.  The NCC offered a tribute to the 30th Anniversary of the Ecumenical Patriarch’s Enthronement, presenting him with a special Proclamation and Pectoral Cross. His All-Holiness then delivered an address entitled “The Future of Ecumenical Dialogue.” (Full text here)

The visit will continue tomorrow with stops in Weirton, WV and South Bend, IN.