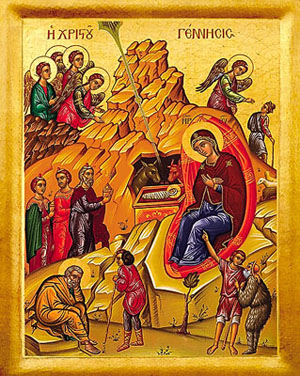 The Nativity of Christ

We have beheld His glory, glory as of the only begotten Son of  the Father. John 1:14

On this holy feast of the Nativity of our Lord Jesus Christ, we gather in joyous celebration of the One who gives us rebirth and new life.  We offer praise to God for His abundant grace and for His divine plan for our redemption and salvation.  We do this in a manner that is filled with beauty, honor and glory, as this is what is due to the commemoration of a uniquely miraculous and wonderful event by which God became man and dwelt among us.

Through our celebration of the Nativity of Christ, our souls and minds are directed to contemplate the glory of His Incarnation.  We hear and sing of this in the hymns of the feast.  We read the passages from the Holy Scriptures that tell of the angels giving glory to God in the highest and of the shepherds returning to their flocksglorifying and praising God for all that they had heard and seen (Luke 2:14, 20).

This glory of the Incarnation revealed in the Nativity of Christ continued throughout His life and ministry as He took upon himself the challenges of our human condition.  His life in communion with God and humanity was an exaltation of what human life was intended to be.  Christ by word and deed showed that the chains of sin could be broken and the permanency of death overcome.  Through faith in Him and the salvation offered, we could know and experience a blessed life of peace and joy forever.

Further, the glory of the Incarnation was revealed through our Lord's message of grace and truth. This was not a message that was dependent on the glory and might of military victory.  It was not associated with the earthly glory of political power.  The glory of the Incarnation was revealed through His love for us and through the Gospel of truth.  He proclaimed, "I have come that they might have life, and that they might have it more abundantly" (John 10:10).  In grace and truth He offered to us the love of God.   Into a world that was marred by animosity, greed, and pride, He brought a beautiful and enduring witness of divine love; and into a world burdened by deceit and vain pursuits, He proclaimed the truth and nature of our creation, our being, and our relationship with God.

Finally, the glory of the Incarnation is revealed in the transforming power of Jesus' presence.  What was lost in the Fall of Adam and Eve is found in His Incarnation and its amazing consequences.  Through His appearance among us, our Lord leads us out of thedarkness of evil and into the uncreated light of eternal truth.  As He dwells with us, He effects our transformation from sin to holiness.  As the Good Shepherd, He guides us from despair to hope.  As the Incarnate Word of God, He shows us the way to overcome ouralienation so that we might live in full and eternal communion with Him.  As our Master, He leads us out of the wilderness and intoparadise.

On the day of our Lord's birth, the glory of His Incarnation was revealed to all of those who were blessed to witness this unique and transcendent act of God's love.  In our commemoration of this holy day, may we all bear witness to the glory of the Incarnation through the witness of what our Lord has done for us and by His loving and saving presence in our midst.  May our thoughts and words express the glory and honor that belongs to the One whobecame flesh and dwelt among us (John 1:14).  And may our experience of the glory of His Incarnation lead us to tell everyone of what we have seen and heard so that all  will come and worship Him.

With paternal love in Christ,