DRAMA, Greece — On Thursday, September 29, 2022, an 11th-century Greek Gospel manuscript was officially repatriated to the Theotokos Eikosiphoinissa (Kosinitza) Patriarchal and Stavropegial Monastery by the Museum of the Bible. One of the world’s oldest hand-lettered gospels, Gospel Manuscript 220 is among the 470 religious objects and 430 manuscripts looted from the Monastery in 1917 by Bulgarian Forces.

“When the Museum of the Bible discovered that this text was illegally and rapaciously taken from the Monastery, it moved quickly, responsibly and professionally to see to its restoration and repatriation. We cannot express enough our gratitude to the Green Family and the Museum for their Christian and professional service,” said Archbishop Elpidophoros of America, who represented His All-Holiness Ecumenical Patriarch Bartholomew during the formal return ceremony at the Monastery in Drama, Greece.

Before journeying to Drama, Museum Founder and Board Chairman Mr. Steve Green, Chief Curatorial Officer Dr. Jeff and Ms. Susan Kloha, and Associate Curator of Medieval Manuscripts Dr. Brian Hyland, who first identified the origins of the text, met with His All-Holiness at the Phanar to learn more about the Ecumenical Patriarchate. They were accompanied by Dr. Elizabeth Prodromou, member of the museum’s Advisory Board and chief facilitator of the institution’s collaboration with the Greek Orthodox Church. With the Patriarch’s permission, the Museum of the Bible had begun displaying the manuscript in October 2021, in time for His All-Holiness’s Apostolic Visit to Washington, DC that Fall.

“Museum of the Bible is honored by the collaboration with the Ecumenical Patriarchate to exhibit the history of the Bible in the Greek world in Washington,” said Mr. Green, founder and chairman of Museum of the Bible. “I was humbled to be received by His All-Holiness in Istanbul, and I pray for continued blessings on him and the growth of the Orthodox Church. We look forward to celebrating the return of the gospel manuscript to the Theotokos Eikosiphoinissa monastery in the days ahead.”

“You have set an example for others to follow, and we pray that they do,” Archbishop Elpidophoros said. “But above all else, you have manifested your commitment to the One Who is the Way, the Truth, and the Life, because you have not allowed the sinful actions of those long dead to prevail. You have chosen the way of the Resurrection, ‘the regeneration when the Son of man shall sit in the throne of his glory.’” (Full Remarks)

Ecumenical Patriarch Bartholomew has loaned three more manuscripts as part of this collaboration for a permanent exhibit at the Museum of the Bible and as a gesture of gratitude for the gospel manuscript's return. Both the Greek Orthodox Church and the Museum of the Bible express their hope that other collections in the United States in possession of manuscripts from the Kosinitza monastery will likewise voluntarily return them to their rightful home. 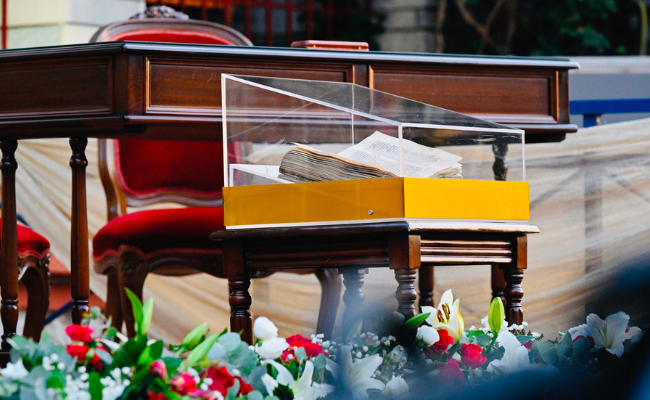 The Holy Book of Gosepls, once known as "Kozinitsa Manuscript 220," is returned to its home at the Monastery. 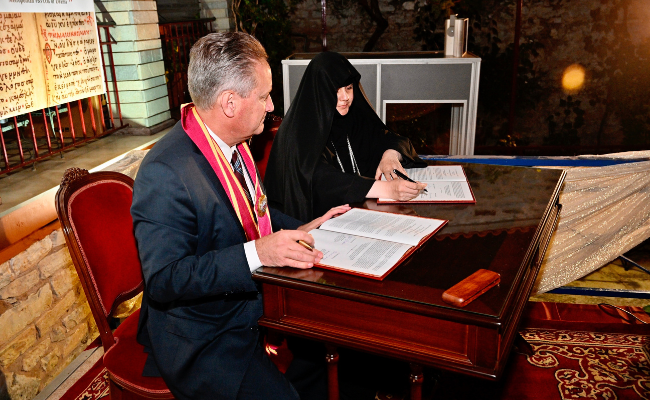 Mr. Steve Green, Founder and Chairman of Museum of the Bible, and Right Reverend Abbess Geronitissa Antonini of Kosinitza Monastery.

The Holy Book of Gosepls, once known as "Kozinitsa Manuscript 220," is returned to its home at the Monastery. 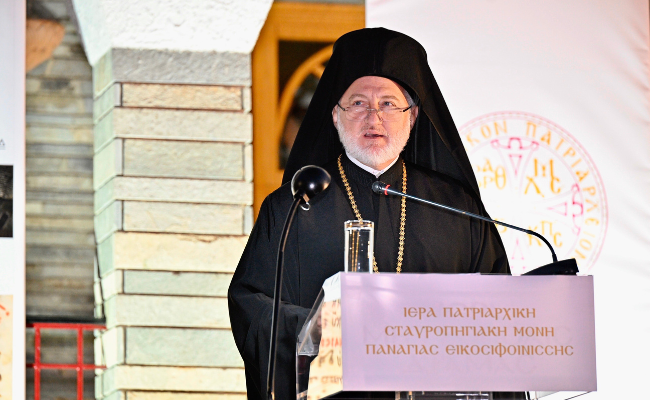 “You have set an example for others to follow, and we pray that they do,” His Eminence Archbishop Elpidophoros of America said.