The Archdiocesan Byzantine Choir to Chant in Constantinople

Εκτύπωση The Archdiocesan Byzantine Choir to Chant in Constantinople 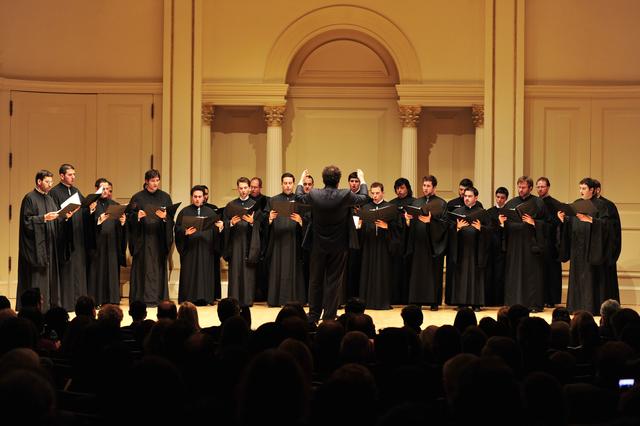 The Archdiocesan Byzantine Choir in a past performance at Carnegie Hall in New York
© (photo © D.Panagos/GOA)

The concert, organized with the blessing of His Eminence Archbishop Demetrios of America, will honor His All-Holiness Ecumenical Patriarch Bartholomew and will take place in the ancient church of Hagia Irini on November 30, at 6 p.m.  The church of Hagia Irini not only stands directly behind the Great Church of Hagia Sophia but was the site of the 2nd Ecumenical Council in 381AD. It was within Hagia Irini in 381AD that the Symbol of the Faith (the Creed) was drafted by Saint Gregory the Theologian. Thus, the symbolism of this performance by young men who were, for the most part, born and raised in the United States is profound. It is a return and re-discovery of the spiritual and ecclesiastical roots of Byzantine Music.

Commenting on the historical significance of the trip, Archdeacon Panteleimon Papadopoulos, director of the Archdiocesan School of Byzantine Music, stated, “without exaggeration, this is the single most humbling performance of this choir’s short life. To be in the church of Hagia Irini, a church that was never converted into a mosque, and to chant hymns from our ecclesiastical tradition in praise of our Lord and in honor of His All-Holiness whom we not only love, but know very well the conditions and pressures of his patriarchal ministry, is profoundly humbling. I know that I speak for all 36 members joining me on this trip when I say that we all feel a tremendous amount of gratitude to God for bestowing upon us this great blessing to perform, or should I say pray, in Hagia Irini.”

The choir enjoys a broad programmatic reputation and ecclesiastical repertoire with performances in various venues such as universities, churches and recital halls of NYC. Its primary mission is to share the beauty of Byzantine Music beyond the borders of Orthodox Churches and reveal the spiritual depth of this ancient form of ecclesiastical chant.

Since its inception, the choir has been directed by Demetrios Kehagias. Born in Queens NY, Mr. Kehagias began studying Byzantine Music at the age of 14 under the tutelage of Archon Protopsaltis of the Greek Orthodox Archdiocese of America, Mr. Nikolaos Steliaros. Among his top students in musical theory and application, Mr. Kehagias advanced swiftly and, at age 20, obtained the Certificate of Chant with highest distinction from the National Conservatory of Athens. In 2009, he received the advanced degree of Byzantine Music Teaching (Diploma Mousikodidaskalou) with highest distinction from the National Conservatory of Athens.  Mr. Kehagias also has a firm knowledge of western music, having studied jazz and composition at Long Island University in Brooklyn, NY.

The choir has grown significantly in reputation having already performed twice in Carnegie Hall and in the Metropolitan Museum of Art. It has become the premier Byzantine Music choir in the New York Metropolitan area as well as among the Greek American community. The choir’s goals are to provide a positive social setting based on the Orthodox Faith, to help the members of the choir achieve excellence in musical performance and to provide them with the rewards of participation in the choral arts. Committed to musical excellence, the choir gives talented young chanters the opportunity to share the treasure of Byzantine Music with all people.

The Choir’s dedication to musical excellence and broad range of musical presentation has resulted in unique concerts even though it has only been in existence for less than a year. The following are some of the choir’s special performances:

2010 December Debut performance at Fairfield University as part of a lecture series on Orthodox Theology.

2011 April Invited by the Consul General of Greece in New York, H.E. Agi Balta, to chant for the inauguration of an exhibition of paintings by George Lelekopoulos on the Passion and Resurrection of Christ.

2011 September Performed as part of an inter-religious call to prayer for a special commemoration on the 10th Anniversary of September 11th organized by St. John the Divine Cathedral in NYC.

2012 March Invited to perform two mini-concerts at the Metropolitan Museum of Art for the Byzantium and Islam Family Day celebrations.

2012 June Concert hosted at the Archdiocesan Cathedral of the Holy Trinity entitled, “We Have Seen the Light.”

2012 September Invited to perform with the St. Romanos Choir of the Archdiocese of Beirut in St. Nicholas Cathedral in Brooklyn, NY.

2013 May Concert in honor of Archbishop Ieronymos II of Athens and All Greece entitled, “He is Risen!” at the Archdiocesan Cathedral of the Holy Trinity, NYC.