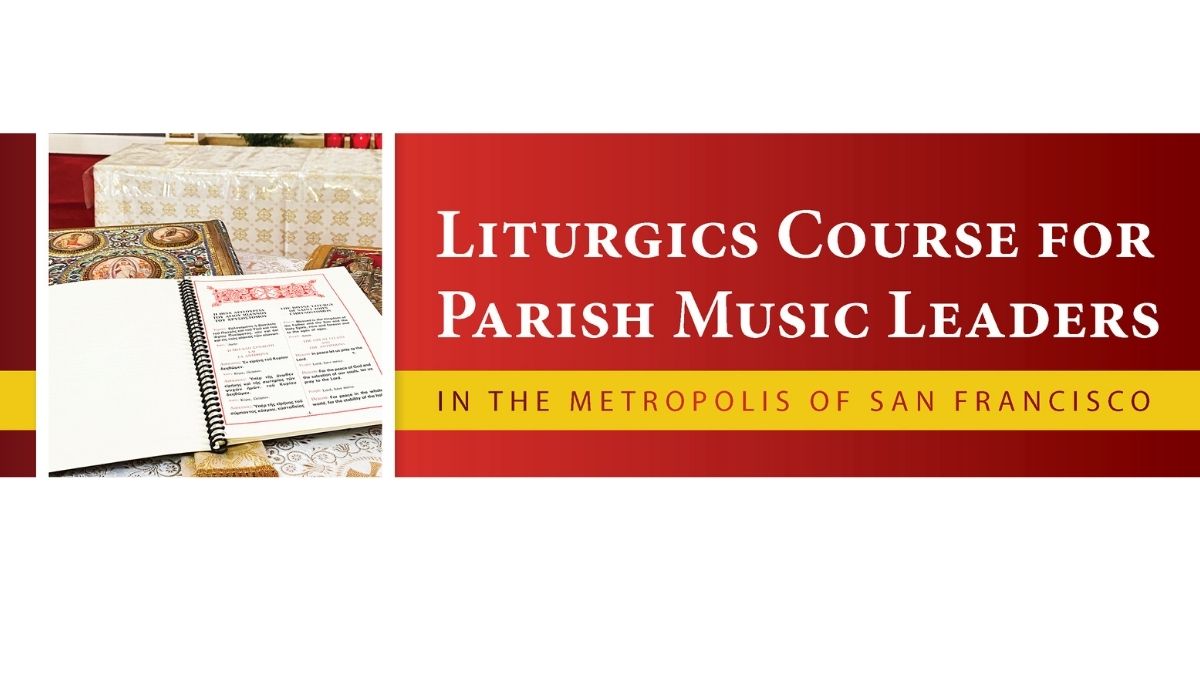 The Greek Orthodox Metropolis of San Francisco Church Music Federation ministry is offering a comprehensive Liturgics Course through the St. John Koukouzelis Institute of Liturgical Arts and its director John Michael Boyer, who also serves as the Protopsaltis of the Metropolis of San Francisco. This course is tailored to the needs of our Metropolis parish music leaders— the head chanters and directors of adult and youth choirs and those who aspire to those roles, and lies at the heart of our goal to take a “faith first” approach to support the music of our parishes by furnishing music leaders with a strong and dynamic understanding of the Vespers, Orthros, and Divine Liturgy, which we believe will inspire and strengthen their own faith and, in turn, equip them to inspire and teach the church musicians in their care.

The Liturgics course will include eight (8) sessions beginning on Wednesday, September 29 through December 15 from 6:30 p.m. to 8:30 p.m., Pacific Time via Zoom. The curriculum will cover the basic structure, content, and theology of the liturgical services of the Orthodox Church, focusing on the central daily liturgical cycle of Divine Liturgy, Vespers, and Matins (Orthros).

This course is only open to parish music leaders— the head chanters, directors of adult and youth choirs and choir singers – within the parishes of the Greek Orthodox Metropolis of San Francisco.

Participants must register in advance online so they can receive the secure Zoom link for class instruction.

Institute Director and Protopsaltis, John Michael Boyer lectures at workshops and seminars on Eastern Orthodox liturgical music throughout the world, and has received critical acclaim for his solo chant performances and recordings with Cappella Romana and Próto. He began studies of Byzantine Chant at age 14 under musicologist Alexander Lingas at Holy Trinity Greek Orthodox Church in Portland.  In 1996 and 1999, he furthered his studies in Athens under the late Archon Protopsaltis Lycourgos Angelopoulos, director of the Greek Byzantine Choir.  Since then, he has returned to Athens to study advanced theory, composition and orthography with renowned cantor and musicologist Ioannis Arvanitis, and to sing with the late Lycourgos Angelopoulos at Saint Irene’s church in Monastiraki.  In 2014, he was one of the over 100 students of Angelopoulos to chant at his funeral.

John produces original and adapted settings of Byzantine Chant in both Post-Byzantine and Western notations.  He is Cappella Romana’s main editor for the composition, transcription, adaptation and compilation of Byzantine Music in the received tradition, including the scores for the critically acclaimed recording of the Divine Liturgy of St. John Chrysostom sung in Byzantine Chant in the English language.  He also composed original musical settings in English for the service of the Holy Passion for the recording All Creation Trembled by the Saint Romanos Byzantine Choir at Holy Cross Greek Orthodox School of Theology, published later by The Liturgical Arts Academy in a digital book of same name in collaboration with composers Gabriel Cremeens and Samuel Herron.  In 2013, he set the melodies of the Orthodox Funeral Office to English for the funeral of renowned composer Sir John Tavener.  In 2017, Boyer collaborated with his dear friend and colleague, Fr. John Rassem El Massih, in the founding of Próto, a solo-duo ensemble.  Their inaugural recording, Sun of Justice, features Byzantine Music for Christmas in Greek, Arabic, and English.  In 2019, Boyer published the first edition of his digital book, Sun of Justice, with  complete musical settings for the feast of the Nativity in English.

In March 2006, John was appointed to the position of Protopsaltis (First Cantor) of the Greek Orthodox Metropolis of San Francisco by His Eminence Metropolitan GERASIMOS.  Having received a Bachelor's of Arts Degree in music at the University of California, Berkeley, he continues to sing on a regular basis with Cappella Romana, and in 2017 was made the ensemble’s Associate Music Director. In May, 2014, John completed studies as a Seminarian, and was awarded a Master’s of Divinity at Hellenic College Holy Cross Greek Orthodox School of Theology in Brookline, Massachusetts, where he served as Lambadarios (Left Cantor) of the Chapel, and tutored and instructed the students of the School in Byzantine Music.  From 2015 to 2016, John served as Protopsaltis and Director of Music at Holy Trinity Greek Orthodox Cathedral in Portland, Oregon, quickly developing the best Byzantine Music-based, fully-integrated liturgical music program in the Metropolis of San Francisco.  Now Holy Trinity’s full-time Protopsáltis, John continues to serve the Metropolis of San Francisco in the development, promotion, instruction, and dissemination of traditional liturgical music, as the director of the Saint John Koukouzelis Institute of Liturgical Arts.

In 2018, John married Greek philologist, historian, lecturer, and author, Evangelia Boubougiatzi.  They have twin girls and split their time between Portland and Pyrgetos of Larisa, Greece.