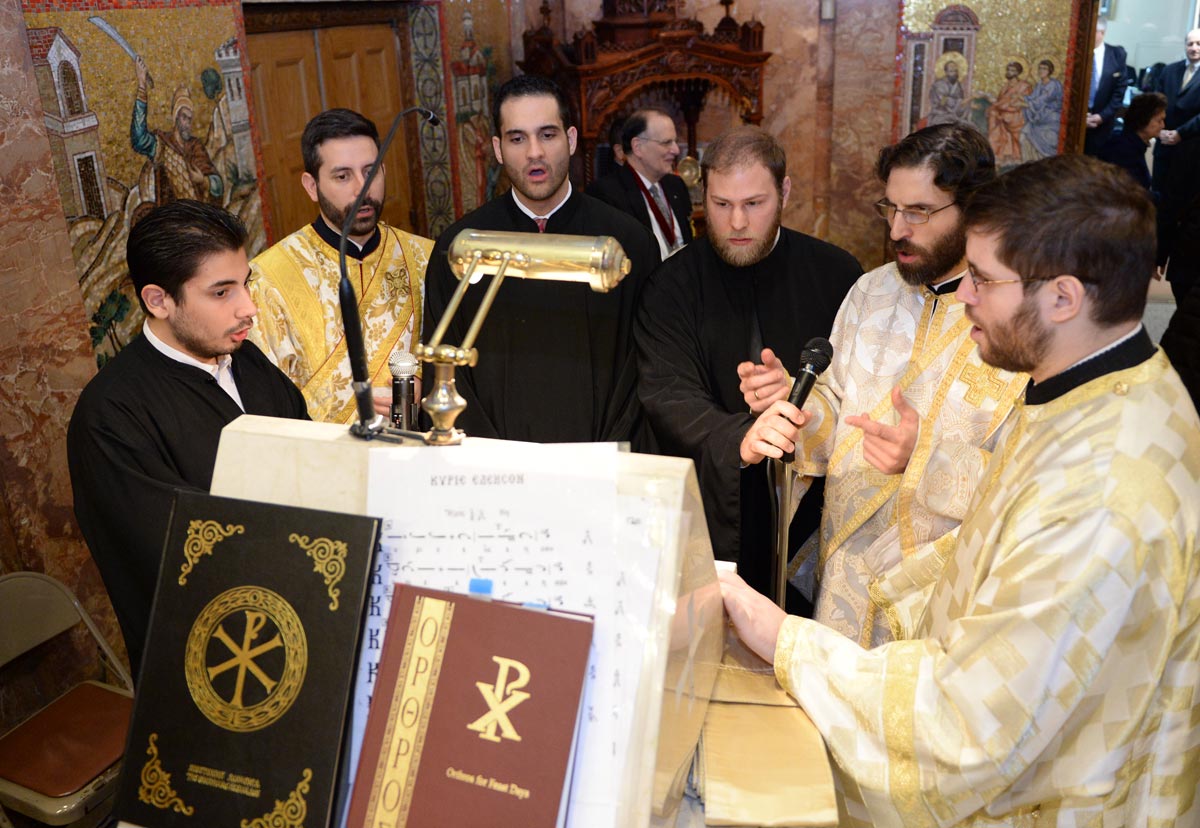 Strictly speaking, Byzantine music is the medieval sacred chant of Christian Churches following the Orthodox rite. This tradition, encompassing the Greek-speaking world, developed in Byzantium from the establishment of its capital, Constantinople, in 330 until its fall in 1453. It is undeniably of composite origin, drawing on the artistic and technical productions of the classical age, on Jewish music, and inspired by the monophonic vocal music that evolved in the early Christian cities of Alexandria, Antioch and Epheus.

Byzantine chant manuscripts date from the ninth century, while lectionaries of biblical readings in Ekphonetic Notation (a primitive graphic system designed to indicate the manner of reciting lessons from Scripture) begin about a century earlier and continue in use until the twelfth or thirteenth century. Our knowledge of the older period is derived from Church service books Typika, patristic writings and medieval histories. Scattered examples of hymn texts from the early centuries of Greek Christianity still exist. Some of these employ the metrical schemes of classical Greek poetry; but the change of pronunciation had rendered those meters largely meaningless, and, except when classical forms were imitated, Byzantine hymns of the following centuries are prose-poetry, unrhymed verses of irregular length and accentual patterns. The common term for a short hymn of one stanza, or one of a series of stanzas, is troparion (this may carry the further connotation of a hymn interpolated between psalm verses). A famous example, whose existence is attested as early as the fourth century, is the Vesper hymn, Phos Hilaron, "Gladsome Light"; another, O Monogenes Yios, "Only Begotten Son," ascribed to Justinian I (527-565), figures in the introductory portion of the Divine Liturgy. Perhaps the earliest set of troparia of known authorship are those of the monk Auxentios (first half of the fifty century), attested in his biography but not preserved in any later Byzantine order of service.

Two concepts must be understood if we are to appreciate fully the function of music in Byzantine worship. The first, which retained currency in Greek theological and mystical speculation until the dissolution of the empire, was the belief in the angelic transmission of sacred chant: the assumption that the early Church united men in the prayer of the angelic choirs. This notion is certainly older than the Apocalypse account (Revelations 4:8-11), for the musical function of angels as conceived in the Old Testament is brought out dearly by Isaiah (6:1-4) and Ezekiel (3:12). Most significant in the fact, outlined in Exodus 25, that the pattern for the earthly worship of Israel was derived from heaven. The allusion is perpetuated in the writings of the early Fathers, such as Clement of Rome, Justin, Ignatius of Antioch Athenagoras of Athens and Pseudo-Dionysios the Areopagite. It receives acknowledgement later in the liturgical treatises of Nicolas Kavasilas and Symeon of Thessaloniki (Patrologia Graeca, CL, 368-492 and CLV, 536-699, respectively).

The effect that this concept had on church music was threefold: first, it bred a highly conservative attitude to musical composition; secondly, it stabilized the melodic tradition of certain hymns; and thirdly, it continued, for a time, the anonymity of the composer. For if a chant is of heavenly origin, then the acknowledgement received by man in transmitting it to posterity ought to be minimal. This is especially true when he deals with hymns which were known to have been first sung by angelic choirs - such as the Amen, Alleluia, Trisagion, Sanctus and Doxology. Consequently, until Palaeologan times, was inconceivable for a composer to place his name beside a notated text in the manuscripts.

Ideas of originality and free invention similar to those seen in later music probably never existed in early Byzantine times. The very notion of using traditional formulas (or melody-types) as a compositional technique shows an archaic concept in liturgical chant, and is quite the opposite of free, original creation. It seems evident that the chants of the Byzantine repertory found in musical manuscripts from the tenth century to the time of the Fourth Crusade (1204-1261), represent the final and only surviving stage of an evolution, the beginnings of which go back at least to the sixth century and possibly even to the chant of the Synagogue. What exact changes took place in the music during the formative stage is difficult to say; but certain chants in use even today exhibit characteristics whichmay throw light on the subject. These include recitation formulas, melody-types, and standard phrases that are clearly evident in the folk music and other traditional music of various cultures of the East, including the music of the Jews.

The second, less permanent, concept was that of koinonia or "communion." This was less permanent because, after the fourth century, when it was analyzed and integrated into a theological system, the bond and "oneness" that united the clergy and the faithful in liturgical worship was less potent. It is, however, one of the key ideas for understanding a number of realities for which we now have different names. With regard to musical performance, thisconcept of koinonia may be applied to the primitive use of the word choros. It referred, not to a separate group within the congregation entrusted with musical responsibilities, but to the congregation as a whole. St. Ignatius wrote to the Church in Ephesus in the following way:

"You must every man of you join in a choir so that bring harmonious and in concord and taking the keynote of God in unison, you may sing with one voice through Jesus Christ to the Father, so that He may hear you and through your good deeds recognize that you are parts of His Son."

A marked feature of liturgical ceremony was the active part taken by the people in its performance, particularly in the recitation or chanting of hymns, responses and psalms. The terms choros, koinonia and ekklesia were used synonymously in the early Byzantine Church. In Psalms 149 and 150, the Septuagint translated the Hebrew word machol (dance) by the Greek word choros. As a result, the early Church borrowed this word from classical antiquity as a designation for the congregation, at worship and in song in heaven and on earth both. Before long, however, a clericalizing tendency soon began to manifest itself in linguistic usage, particularly after the Council of Laodicea, whose fifteenth Canon permitted only the canonical psaltai, "chanters," to sing at the services. The word choros came to refer to the special priestly function in the liturgy - just as, architecturally speaking, the choir became a reserved area near the sanctuary - and choros eventually became the equivalent of the word kleros.

The development of large scale hymnographic forms begins in the fifth century with the rise of the kontakion, a long and elaborate metrical sermon, reputedly of Syriac origin, which finds its acme in the work of St. Romanos the Melodos (sixth century). This dramatic homily, which usually paraphrases a Biblical narrative, comprises some 20 to 30 stanzas and was sung during the Morning Office (Orthros) in a simple and direct syllabic style (one note per syllable). The earliest musical versions, however, are "melismatic" (that is, many notes per syllable of text), and belong to the time of the ninth century and later when kontakia were reduced to the ptooimion (introductory verse) and first oikos (stanza). In the second half of the seventh century, the kontakion was supplanted by a new type of hymn, the kanon, initiated by St. Andrew of Crete (ca. 660-ca. 740) and developed by Saints John of Damascus and Kosmas of Jerusalem (both eighth century). Essentially, the kanon is an hymnodic complex comprised of nine odes which were originally attached to the nine Biblical canticles and to which they were related by means of corresponding poetic allusion or textual quotation.

The nine canticles are:

Each ode consists of an initial troparion, the heirmos, followed by three, four or more troparia which are the exact metrical reproductions of the heirmos, thereby allowing the same music to fit all troparia equally well.

The nine heirmoi, however, are metrically dissimilar; consequently, an entire kanon comprises nine independent melodies (eight, when the second ode is omitted, which are united musically by the same mode and textually by references to the general theme of the liturgical occasion, and sometimes by an acrostic. Heirmoi in syllabic style are gathered in the Heirmologion, a bulky volume which first appeared in the middle of the tenth century and contains over a thousand model troparia arranged into an oktoechos (the eight-mode musical system).

Another kind of hymn, important both for its number and for the variety of its liturgical use, is the sticheron. Festal stichera, accompanying both the fixed psalms at the beginning and end of Vespers and the psalmody of the Lauds (the Ainoi) in the Morning Office, exist for all special days of the year, the Sundays and weekdays of Lent, and for the recurrent cycle of eight weeks in the order of the modes beginning with Easter. Their melodies preserved in the Sticherarion, are considerably more elaborate and varied than in the tradition of the Heirmologion.

With the end of creative poetical composition, Byzantine chant entered its final period, devoted largely to the production of more elaborate musical settings of the traditional texts: either embellishments of the earlier simpler melodies, or original music in highly ornamental style. This was the work of the so-called Maistores, "masters," of whom the most celebrated was St. John Koukouzeles (active c.1300), compared in Byzantine writings to St. John of Damascus himself, as an innovator in the development of chant. The multiplication of new settings and elaborations of the old continued in the centuries following the fall of Constantinople, until by the end of the eighteenth century the original musical repertory of the medieval musical manuscripts had been quite replaced by later compositions, and even the basic model system had undergone profound modification.

Chrysanthos of Madytos (ca. 1770-46), Gregory the Protopsaltes, and Chourmouzios the Archivist were responsible for a much needed reform of the notation of Greek ecclesiastical music. Essentially, this work consisted of a simplification of the Byzantine musical symbols which, by the early 19th century, had become so complex and technical that only highly skilled chanters were able to interpret them correctly. Despite its numerous shortcomings the work of the three reformers is a landmark in the history of Greek Church music, since it introduced the system of neo-Byzantine music upon which are based the present-day chants of the Greek Orthodox Church.