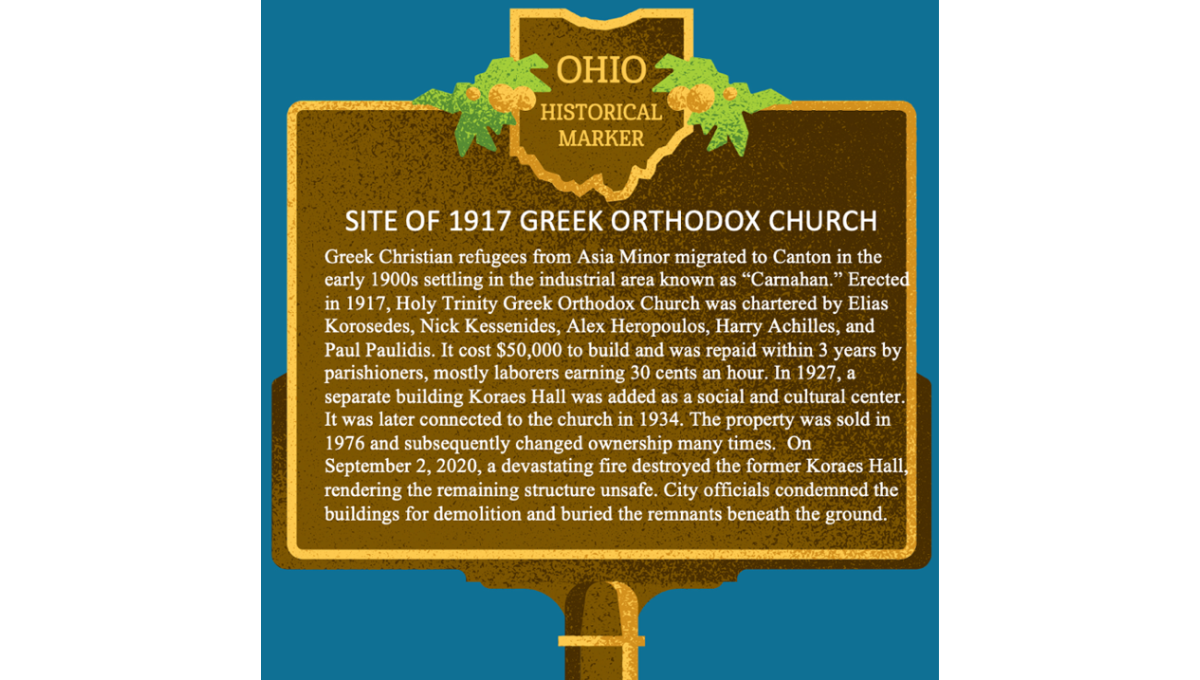 CANTON, OH – Holy Trinity Greek Orthodox Church in partnership with the Ohio History Connection, a nonprofit statewide history organization advancing Ohio’s history and stories, held a dedication ceremony for a Historical Marker on Saturday, September 17 at 12 p.m. at the site of the former Holy Trinity Greek Orthodox Church built in 1917, located at 1749 10th Street N.E., Canton, OH 44709. The Historical Marker recognized the property as a landmark that served as the religious, social, and cultural center for the Greek Christian refugees of Asia Minor who migrated to Canton, Ohio in the early 1900s.

These Christian people were forced out of their homeland due to religious and ethnic persecution and settled into Canton because of the availability of jobs. The area used to be a thriving industrial section of Canton known as “Carnahan,” which was the name of the main street of this neighborhood. In those days, the migrants’ homes surrounded the church and its property which served as the center of their “village.” Due to the nature of the old Carnahan area today which is categorized as a flood plain, many residents have moved away taking their businesses with them and dilapidated properties have been torn down. Many structures have been erased, leaving no trace that this area was once a vibrant ethnic neighborhood. Nevertheless, the location of the new Historical Marker will memorialize the significance of this property for generations to come. Local elected officials, national organizations, and over 100 community members attended the dedication ceremony.

Daniel Moeglin, Executive Director of Stark Parks highlighted, “This whole area looked abandoned, and we thought it would be a great opportunity to create a nature preserve for environmental recreational use, such as trails and bird watching. The City of Canton applied for grants through the Ohio Public Works Commission Clean Ohio Green Space Conservation Program to acquire the majority of the properties in the area and turn them into a green space. While preserving the environment, it was important to also remember the past and preserve our heritage. This was the impetus for the effort we are seeing here today.”

Alexandra Zouncourides-Lull, Historical Marker Committee Chair, explained “since the old church property has been converted into a green space, it is fitting for a marker to be posted where the refugees a century ago filled the streets and called the area home. Without this marker, history will be lost and even the future descendants of these refugees may never know that this landmark was part of the rich immigrant history of Canton, Ohio.”

Canton Mayor Thomas Bernabei issued a Mayoral Proclamation stating, “We honor and remember this historical and Holy site; we honor the dedication, dreams, work ethic and faith of the original Greek Orthodox immigrant founders who built the Church and helped build our Canton community; and we honor their descendants and the many families of today’s Holy Trinity Greek Orthodox church who continue to contribute so greatly to our Canton community.”

Anastasia Spiridis, Educational Director of the Asia Minor Pontos Hellenic Research Center (AMPHRC), spoke on behalf of President Mr. George Mavropoulos and the Board of AMPHRC to congratulate the community on this historical and momentous occasion. “The mission of AMPHRC is to educate and disseminate our history, to inform the non-Hellenic populations of the plight of our ancestors and our history,” said Spiridis. “We must support the establishments of monuments built in honor of our history so that we never forget. Today in Canton, we will never forget the history of Holy Trinity as the Ohio historical society officially has made them, us, our story as descendants of Asia Minor, significant. Thank you, Ohio historical society, for bestowing this honor on our ancestors and by extension to all of us.”

Phil Giavasis, Clerk of Court, Canton Municipal Court grew up in the area and described his childhood with relation to the former church. He read news clips from the Canton Evening Repository of 1917, which stated how “the cornerstones were laid for building the church and construction prices tripled before completion. The community at the time was made up of mostly single males who had maintained their language, culture and religion intact after being under the Turkish yoke for almost 500 hundred years.” According to the Repository, “the church was organized in the summer of 1917 by a congregation of 15 persons. By 1920, there were more than 500 members.” He concluded by highlighting the struggles of the men who founded the church and the importance of having the historical marker today.

Gus Tsilfides, President Pan-Pontian Federation USA and Canada spoke in both Pontiaka, a dialect of some Greeks of Asia Minor, and in English. He explained “all the collective sighs of our ancestors have been turned into songs.” The word “song” in Pontiaka is “tragodia” which also means tragedy. “The tragedy that fell upon our ancestors has been turned into lamentations and songs. We wish to thank this great nation for offering our ancestors refuge, freedom, a place to build their future, and a future of their children, grandchildren, and great grandchildren. This nation that embraced us, and we in turn embraced it, has allowed us to become an inextricable part of the fabric of its people. Nowhere else on earth do the flowers of freedom bloom brighter than in these here United States of America.”

His Eminence Metropolitan Savas of Pittsburgh and the local clergy conducted a Trisagion memorial service to commemorate the founders and those who had gone before in the community, to pray for their souls. Holy Trinity was one of 30 churches in America that preexisted before the creation of the Archdiocese and used to be directly under the command of the Church of Greece until 1922, when Holy Trinity then fell under the control of the Greek Orthodox Archdiocese of America. September 17th is the 100-year anniversary of the burning of Smyrna which drove many of the Greeks of Asia Minor to these shores.

Dr. Aris Beoglos Eliades, former President of the Koraes Ladies Society, explained how Koraes Ladies Society took its name from Adamantios Koraes, a Greek scholar and patriot born in Asia Minor. He was the intellectual father of the Greek War of Independence and helped breed the idea of democracy and religious freedom in all Greeks. The Koraes Ladies Society was founded in 1927, four years before the National Philoptochos philanthropic organization was founded in America. For the past 95 years, Koraes has been known as the right hand of the church. She closed by stating “faith without works is dead and all that we do is in reverence to the Holy Trinity and a tribute to those strong, hardworking, faith loving women who we remember today with this commemorative marker.”

Nick Spondyl, Historical Marker Committee Co-Chair, concluded the program by remembering his childhood and growing up in the area. He reminded everyone to share the memories because “the pioneers gave us our foundation without which we would not have moved to 47th street and Fairhaven.” He closed by stating “Let us never forget their contributions to Canton, to Ohio, to the United States. Yes, we moved but it was that spirit of Holy Trinity that moved with us, that family, that community and that sense of commitment.”