History of Evyenia's House of Hope 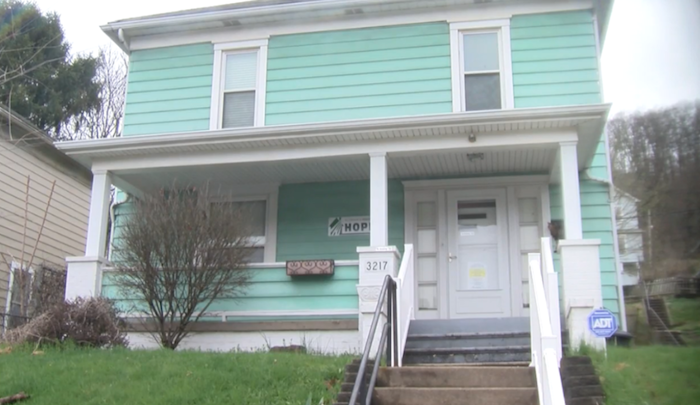 Who would believe the humble home known as “Evyenia’s House of Hope” donated to the Weirton Christian Center by the Psaros family would become a house which would serve the Weirton community and the tri-state area?

Purchased in the 1930s, 3217 Orchard Street would became the home of Harilaos and Evyenia Loufakis, immigrants from Olympi Chios Greece, who would raise their three daughters, Kalliopi, Marianna and Elefteria.

The purchase of the Orchard Street residence coincided with the move of their father’s “Sun Novelty Shoppe” from the upper end of Weirton to 3172 Main Street. The store was aptly named as Harilaos or “Harry”, a merchandising pioneer, sold “everything under the sun”.

“Harry” worked seven days a week and only closed on Christmas Day.  His goal was to see his three daughters complete their college education.  Each daughter would attend West Virginia University and graduate with honors.

Evyenia was the consummate homemaker and the backbone of the family. Together Evyenia and Harilaos had a loving and supportive marriage.  Sadly, Harilaos passed away on July 2nd, 1963 and the store was closed forever.

At this time Kalliopi and Elefteria pursued journalism careers in Washington, DC and in San Francisco.  Marianna lived with her mother until she met her husband George Psaros.  They were married in 1965, and two sons were born of that union.  Michael and Harry became the overwhelming joy of their Yiayia.  Marianna was a school teacher and George was an electrical engineer at Weirton Steel.  Both worked long hours. It gave “Yiayia Evyenia” the opportunity to mold her grandsons into the men they are today. She taught them important lessons carried into their adulthood- their Orthodox faith, the Greek language and “Philotimo”.

When Evyenia passed away May 14th, 1999, 3217 Orchard Street was willed to her three daughters.  They in turn passed ownership to Michael Psaros. Michael chose to honor his grandmother’s memory by helping families in need and donated the house to the Weirton Christian Center (WCC). Since its inception, the WCC had helped newly arrived immigrants and families offering kindness and direction while navigating their new homeland.

Cousin Nick Latousakis, as President of the Board of Directors of the Weirton Christian Center, appropriately named the humble house “Evyenia’s House of Hope”.  Nick, whose parents also immigrated from Chios, Greece, grew up several houses down from on Orchard Street and proudly reflects on the current use of the home which continues its mission as a life- skills learning center for area children and young moms.

Since 2015, Evyenia’s House of Hope has become a place for families to repair their lives under the umbrella of the Weirton Christian Center.

The “House of Hope” has become a place for supervised visitation for children and the parents they are separated from.  Licensed supervisors from home base and youth services systems have three different visitation rooms that can be used throughout the week to bring families together.

In the basement, hundreds of formal gowns are available for use for those who can’t afford to buy new ones for the minimal cost of $25, which covers the cost of dry cleaning .

Evyenia and Harilaos’ home has truly become a “House of Hope” for families in our community.