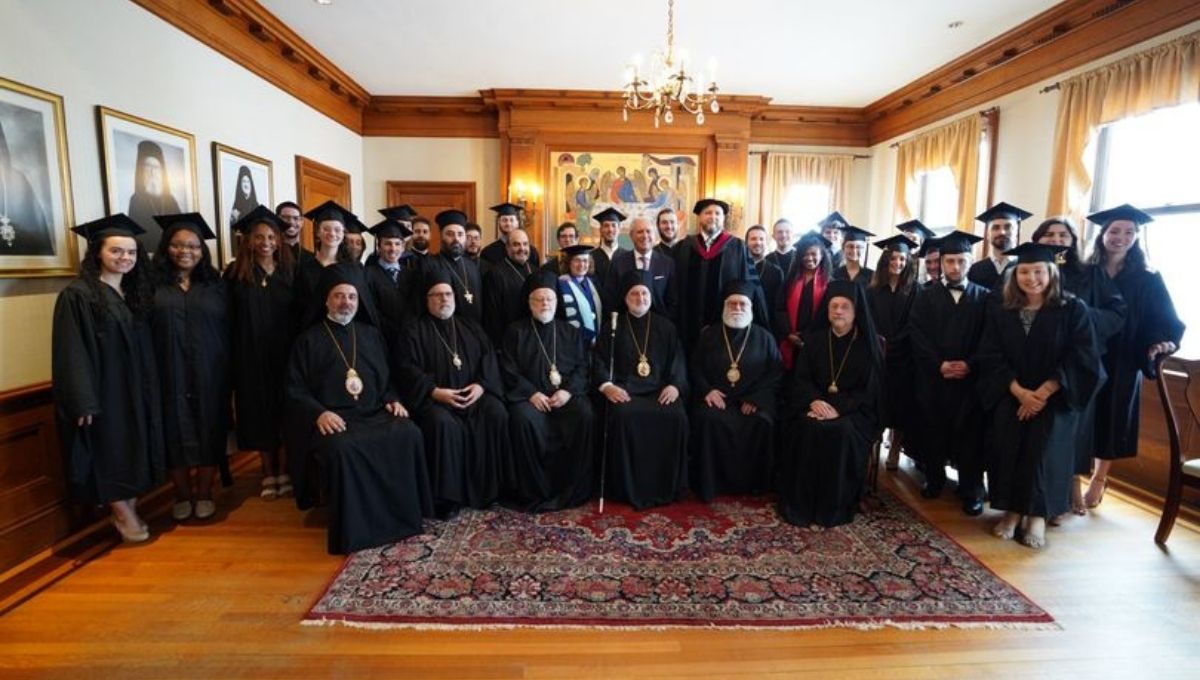 Boston--Hellenic College Holy Cross Greek Orthodox School of Theology conducted its 80th Commencement exercises on Saturday, May 21, in the Pappas Auditorium. All graduations provide cause for celebration, but this year’s was an especially joyous occasion, being the first in-person ceremony since 2019 due to Covid restrictions in 2020 and 2021.

His Eminence, who is also Chairman of HCHC’s Board of Trustees, opened the ceremony with an invocation, after which the Holy Cross St. Romanos the Melodist Byzantine Choir led the singing of both the Greek and American national anthems.

HCHC President George Cantonis then offered a salutation in which he quoted from the great poet Cavafy’s “Ithaca,” with its advice—so appropriate to those graduating—that the journey is as important as the ultimate destination.

Greetings and congratulations followed from Rev. Fr. Jon Magoulias, Vice-Chairman of the Board, and Stratos Efthymiou, Consul General of the Hellenic Republic in Boston. Also congratulating the graduates and assuring all present of their organizations' continuing support of HCHC were Jeannie Ranglas, First Vice President of the National Greek Orthodox Ladies Philoptochos Society, Demetrios Logothetis, Chairman of Leadership 100, and Dr. Diana Demetrulias, HCHC’s Vice President for Academic Affairs.

Dr. Timothy Patitsas, Interim Dean of Hellenic College, and Rev. Dr. George Parsenios, Dean of Holy Cross, introduced the valedictorians of their respective schools. Both George O’Donnell, Hellenic College, and Nickolas Eliadis, Holy Cross, spoke eloquently (Nickolas in both Greek and English), expressing encouragement to their classmates for the future and gratitude to their professors for the academic and spiritual education they received at HCHC. Notably, Nickolas was also the valedictorian of his class when he graduated from Hellenic College three years ago.

Two extraordinary individuals were then awarded honorary degrees in recognition of their very different but equally impressive accomplishments in service to the Church. Paulette Poulos, Executive Director of Leadership 100, received the honorary degree of Doctor of Humanities, while Constantine Triantafilou, Director and CEO of International Orthodox Christian Charities, received the honorary degree of Doctor of Divinity. The citations for both said, “You embody the highest virtues espoused by our Faith, our Hellenic heritage, and the society in which we live.” Because Mr. Triantafilou was unable to attend due to illness, his brother-in-law, Fr. Elias Villis, accepted the honor on his behalf.

After the conferral of degrees upon the graduates of both the College and the School of Theology, a musical interlude followed, with Hellenic College student Despina Dassouras sharing her impressive operatic gifts in a solo performance of “Climb Every Mountain.”

Commencement concluded with His Eminence’s Paterexhortatory and benediction. Addressing the graduates, he urged them “to constantly aspire to a deeper and deeper understanding of your faith, and of your place in the world…As you go forward, make sure that your ship is always the Church of Christ. Your sail is the Holy Scripture. And your mast is the Holy Cross.”