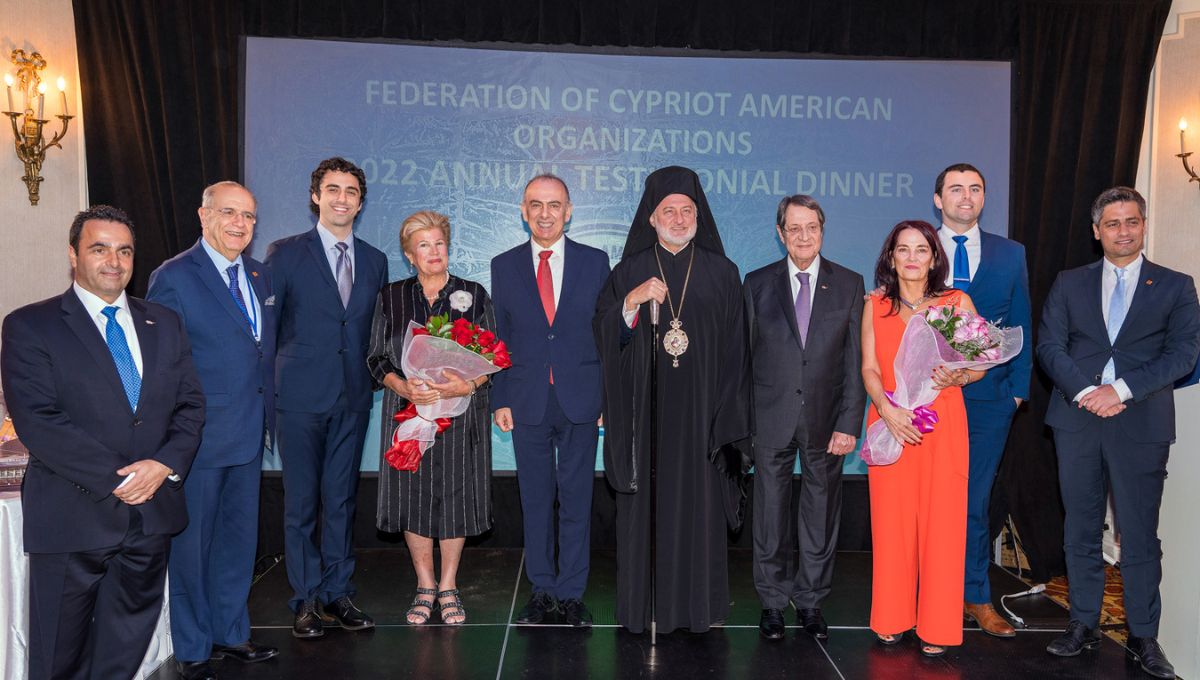 On Friday, September 23, the Federation of Cypriot American Organizations (FCAO) hosted its annual Testimonial Dinner, this year honoring Dr. Kyriakos A. Athanasiou, distinguished professor and Henry Samueli Chair at the University of California—Irvine and member of both the National Academy of Inventors and the National Academy of Medicine.

Dr. Athanasiou was born in Lanarca, Cyprus in the year of the island nation’s independence, and, during his acceptance speech, he vividly recalled the 1974 Turkish invasion. Leaving to search for his missing brother, his parents had entrusted the care of the rest of the family to him, giving him the keys to the “grafeio”— where he would find their paperwork and savings in the event he would need to flee home while they were away.

Archbishop Elpidophoros, Honorary Co-Chair of the event with President of Cyprus Nicos Anastasiades, said, “All of us want justice for Cyprus. All of us want peace. And for this reason, we will never stop demanding for the Turkish troops to stop the illegal occupation of almost half of the island of Cyprus. We can never stop working until we achieve this result. Unity must prevail. Justice must prevail. And if these come to pass, then the bright future of Cyprus will be assured for many generations to come.

“As much as Professor Athanasiou had dedicated his life to relieving the suffering of his fellow human beings, we must all re-dedicate our lives to relieving the suffering that has taken place in Cyprus once and for all. Your recognition of Professor Athanasiou this evening is a reminder to the world of the talent, ingenuity and brilliance of the Hellenes of Cyprus….All of you here tonight represent the best of the Cypriot Diaspora. Your hearts beat with Cyprus. The air you breathe on a daily basis is never without the fragrance of the land, sea and fair winds of Cyprus. While you have honored one of your own this evening, the honor truly belongs to all.”

His Excellency Nicos Anastasiades thanked FCAO personally, and on behalf of the Republic, for its promotion of Cypriot culture and heritage. He said, “FCAO has been a bulwark in our efforts to achieve a comprehensive and lasting settlement to the Cyprus problem, based on the relevant Security Council Resolutions, the international law and the EU values and principles, and has been a strong voice of our cause in the United States.” He also spoke to the Honoree’s accomplishments, saying, “Professor Athanasiou is the epitome of the best that our homeland has produced. We are proud of him, and we are thankful for his contributions to the great human family."

Born and raised in Cyprus, Dr. Athanasiou moved to the United States in 1980 to pursue his studies. After receiving his PhD in Bioengineering from Columbia University, he went on to establish one of the most recognized research groups in tissue engineering and regeneration in the world, addressing significant societal needs through the development of life-saving technologies. He has won countless awards in the United States and abroad, including Cyprus’s Nemitsas Award, and has founded six different start-up companies that have collectively brought to market 15 FDA-approved products. Dr. Athanasiou has also previously served as President of the Biomedical Engineering Society, the largest organization of biomedical engineers and bioengineers in the world, and as the Editor-in-Chief of the Annals of Biomedical Engineering, the flagship journal of BMES. In 2017, the Kyriacos and Kiley Athanasiou Endowment was established to promote biomedical engineering scholarship and honor the contributions of Dr. Kyriacos Athanasiou to the field.

A musical performance by the artist Erini and musicians Cody Geil and Heather Pawui followed.