The Direct Archdiocesan District Office of Education provides curriculum guides, materials, and in-service training to the administrators and teachers serving in the day and afternoon schools of the District.

The Office has been an avid advocate for the New York City parochial Greek Orthodox (or faith-based) day schools, representing the schools – and the Archdiocese - to the education authorities on the federal, state and city levels. As a result, the Office has been instrumental in securing federally funded services and materials for the day schools, thereby benefiting thousands of students. 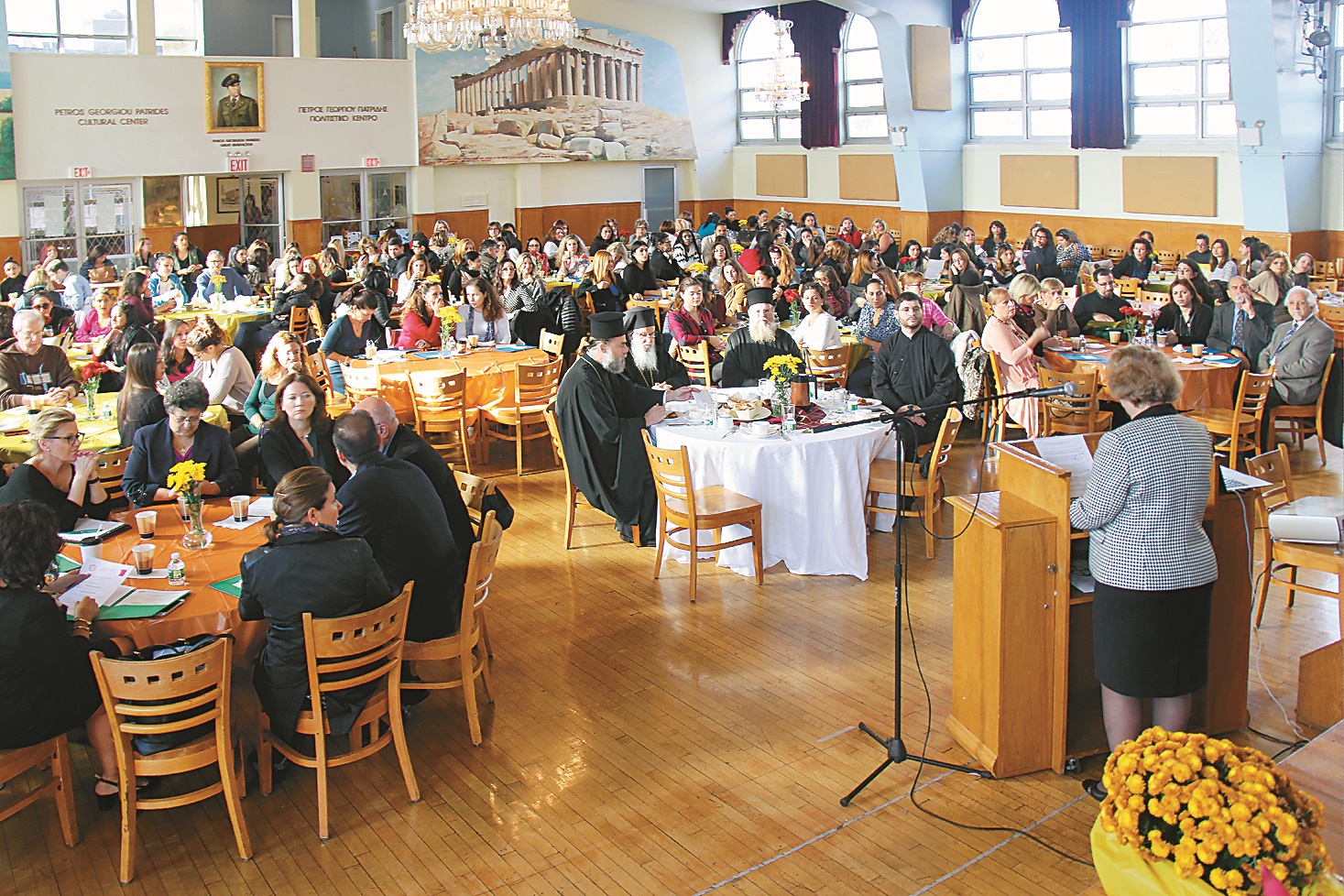 Held under the auspices of Archbishop Demetrios, who was present and addressed the gathering, the seminar featured a Greek and an English program. The latter included a series of workshops for the teachers of the English program of the NYC day schools intended for grades K–12, with the general theme “MATH and STEM.”

Makedon told the gathering “I want to thank your principals who, as a team collaborated with our Office and decided what workshops were best for you this year. Also, I want to thank the Community of St. Demetrios Cathedral, especially the V. Rev. Nektarios Papazafiropoulos as well as school principal Dr. Anastasios Koularmanis, for hosting the seminar. Lastly, I want to thank our spiritual father, Archbishop Demetrios for his trust and support.”

She said they wanted to offer teachers “the opportunity to learn new things that enhance your professional skills and to bring you up-to-date with the mandates of New York State and New York City.” Acknowledging the challenges they face, she later declared to the teachers “we are at your side.”

In his opening remarks His Eminence noted that the well-being of the community’s children is at the heart of its greatest endeavors.

He said of the teachers’ work, “You do something, and you cannot imagine” what the results will be…”You save lives and families, you save the future. All depend on what you do today in the schools.”

The Greek program featured two exceptional educators who made presentations in the library. When Makedon introduced them she also acknowledged the presence of the president of the Prometheus Greek Teachers Association, Demosthenes Triantafillou.

Haroula Ntalla, lecturer at Brooklyn College/CUNY spoke about the learning disabilities/difficulties of students at an early age. She began by noting the importance of addressing the anxieties of parents and then described both the progress and continuing challenges encountered by educators and emphasized the need for more research, especially about how the brain functions in learning situations. She declared that “to teach children with disabilities with the traditional methods is to tyrannize them” and that it undermines their already–low self-esteem.

Conditions such as dyslexia, autism and ADHD were discussed, and Ntalla emphasized the absolute importance of early diagnosis. “The quicker autism is diagnosed the better the results, but parents panic,” she said. The word “autism” is so terrifying that they go into denial rather than seek help.

It is also crucial for teachers to have specialized training in teaching children with disabilities, both because of the importance of mastering the teaching methodology and the children’s behavioral issues.

Maria Kaliampou, senior lecturer at Yale University’s Hellenic Studies Program titled her presentation “The Power of Folktales to Teach and Learn Modern Greek.” Her research has demonstrated folktales’ unique power to seize the attention of children and convey to them linguistic and cultural knowledge. While integrated textbooks do not yet exist, supplementing standard textbooks with books featuring folktale is very effective, she said.

Kaliampou noted the flexibility offered to teachers by the wide variety of types of folktales that illustrate a broad range of values and ideas, including religious stories from the bible and the lives of the saints. Tales abound, some of which are realistic and others magical, and they offer guidance by telling of young brides, elderly couples, animals and other people plagued by foolishness, stubbornness and other challenges and shortcomings.

She believes all the stories are good for all children and Kaliampou is also pleased that they are also vehicles for teaching children about regions in Greece they are not familiar with.

The workshops were well-attended by enthusiastic educators. Jo Don Orimaca presented “The Differentiated Classroom: Instructional Strategies in Math and Science. “We try to understand what motivates children so we can help them succeed,” he said.

A thought-provoking quote from Howard Gardner was on display: “The biggest mistake of past centuries in teaching has been to treat all children as if they were variants of the same individual, and thus to feel justified in teaching them the same subjects in the same ways.”

Peter Perez, speaking about “STEM: Integrating Technology into the 21st Century Classroom,” shared his especially about the way of thinking the new techniques foster in children. He marveled at the imagination, cooperation and resourcefulness displayed by students when he assigned them to build a roller coaster with paper and bits of cardboard. “They will always remember making and fixing that,” he said, emphasizing the value of inquirybased learning.