Methodios the Confessor, Patriarch of Constantinople 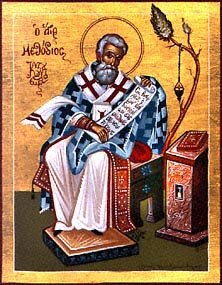 As for Saint Methodius, he was born to wealthy parents in Syracuse of Sicily about the end of the eighth century. Being a presbyter, he was sent as an ambassador to Rome in 815 or 816 on behalf of Patriarch Nicephorus of Constantinople, who had been exiled by Leo the Armenian (see June 2). After Leo's death, he returned to Constantinople; but since he was a zealot for the veneration of the holy icons, he was immediately exiled by Emperor Michael the Stutterer to a fortress near Bithynia. When Michael died, he was freed for a short time; but then, because of his confession of the Orthodox Faith, he was imprisoned again by the Emperor Theophilus in a dark and foul-smelling sepulcher. Since this was not enough for the Emperor's inhumanity, he commanded that two thieves be shut up with Methodius, and when one of them died, that the corpse not be removed. While the Saint was imprisoned there, a certain poor fisherman ministered to his needs. Finally, when the Church received its freedom under Saint Theodora the Empress, the Saint ascended the patriarchal throne of Constantinople in 842. Together with the holy Empress, Methodius restored the holy icons to their proper honor; this is commemorated on the Sunday of Orthodoxy. He governed the Church of Constantinople for four years, and reposed in 846.

Apolytikion of Methodius the Confessor

A model of faith and the image of gentleness, the example of your life has shown you forth to your sheep-fold to be a master of temperance. You obtained thus through being lowly, gifts from on high, and riches through poverty. Methodios, our father and priest of priests, intercede with Christ our God that He may save our souls.

Share the feast of Methodios the Confessor, Patriarch of Constantinople with an icon greeting ecard.