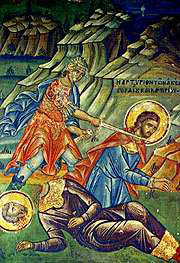 The Martyr Gordios who was from Caesarea of Cappadocia, was a centurion by rank. Unable to bear the impiety of the heathen, he withdrew to the wilderness to purify himself through prayer and fasting. After he perceived that his ascetical training had prepared him sufficiently, he came down from the mountains when a certain pagan festival was held in Caesarea, attended by all, and presented himself before the multitude. Although the spectacles of the festival continued, no one paid them any heed, but all eyes were turned upon him. From his sojourn in the mountains, his look was wild, his beard was long, his raiment squalid, his body like a skeleton; yet a certain grace shone round about him. He was recognized, and a loud shout and tumult was made as his fellow Christians rejoiced, and the enemies of the truth cried out for his death. He boldly professed his faith before the Governor, and after torments was beheaded, in the reign of Licinius in the year 314. Saint Basil the Great delivered a homily on Saint Gordios, mentioning that some of those in his audience had been present at the saint's martyrdom (PG 31:497).

Share the feast of Gordios the Martyr with an icon greeting ecard.