Eugenia the Righteous Nun-martyr of Rome and those with her 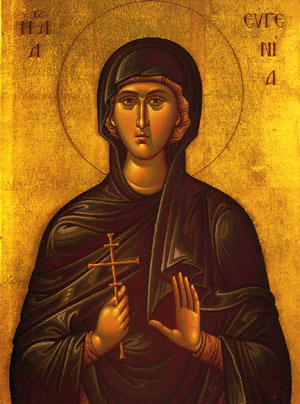 This Martyr was the daughter of most distinguished and noble parents named Philip and Claudia. Philip, a Prefect of Rome, moved to Alexandria with his family. In Alexandria, Eugenia had the occasion to learn the Christian Faith, in particular when she encountered the Epistles of Saint Paul, the reading of which filled her with compunction and showed her clearly the vanity of the world. Secretly taking two of her servants, Protas and Hyacinth, she departed from Alexandria by night. Disguised as a man, she called herself Eugene while pretending to be a eunuch, and departed with her servants and took up the monastic life in a monastery of men. Her parents mourned for her, but could not find her. After Saint Eugenia had laboured for some time in the monastic life, a certain woman named Melanthia, thinking Eugenia to be a monk, conceived lust and constrained Eugenia to comply with her desire; when Eugenia refused, Melanthia slandered Eugenia to the Prefect as having done insult to her honour. Eugenia was brought before the Prefect, her own father Philip, and revealed to him both that she was innocent of the accusations, and that she was his own daughter. Through this, Philip became a Christian; he was afterwards beheaded at Alexandria. Eugenia was taken back to Rome with Protas and Hyacinth. All three of them ended their life in martyrdom in the years of Commodus, who reigned from 180 to 192.

Apolytikion of Martyr Eugenia and those with her

Being mystically moved by the Spirit, thou didst sing God's praise, thereby receiving the clear light of divine knowledge in thy heart; and shining bright as the sun with a righteous life, thou overcamest the devil in martyrdom. O Eugenia, thou most glorious Martyr of the Lord, entreat Christ God to grant great mercy unto us.

Kontakion of Martyr Eugenia and those with her

Share the feast of Eugenia the Righteous Nun-martyr of Rome and those with her with an icon greeting ecard.