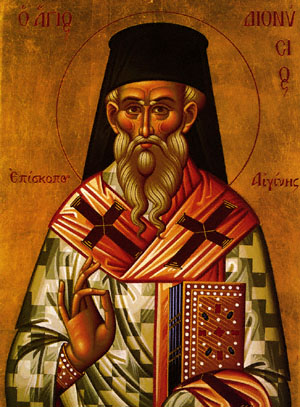 The holy hierarch, Saint Dionysius, who was born and reared on Zakynthos, was the son of pious and wealthy parents, Mocius and Paulina by name. In his youth he entered the ancient monastery of the Strophada Islands, which lie south of Zakynthos, and there he donned the monastic habit. Later, he was appointed Archbishop of Aegina, and adorned its throne for a considerable time. Thereafter he returned to his homeland. One incident in his life especially reveals to what virtue he attained. A man came to him in desperation, witnessing that he had committed a murder, and was being pursued by the slain man's family. He asked Saint Dionysius to give him refuge. The Saint agreed to this, upon learning that it was his own brother whom the man had slain, he said nothing, but concealing the agony of his grief, hid him. When the Saint's kinsmen arrived at the monastery, he told them that the Murderer had gone by such and such a way. When they had departed, he admonished the man concerning the gravity of his sin, instructed him in repentance, and sent him off in peace having forgiven him his brother's murder. According to local tradition, this man later returned and became a monk at this same monastery. Saint Dionysius reposed in peace in 1621, leaving behind his sacred and incorrupt relics as a treasure for his fellow citizens.

Apolytikion of Dionysios of Zakynthos

The faithful son of Zakynthos, Aegina's wise prelate, the protector of the august Monastery of Strophada, O wise Dionysius, with one voice, all we the faithful honour thee and cry: By thy prayers, save them that keep thy memorial and cry unto thee sincerely: Glory to Christ Who hath glorified thee. Glory to Him who hath made thee wondrous. Glory to Him Who made thee our unsleeping intercessor.

Kontakion of Dionysios of Zakynthos

On this day doth Zakynthos call all the faithful together, rousing them to offer praise in songs and hymns of thanksgiving to our great and fervent helper in needs and sorrows, who doth swiftly rescue them that are caught in perils. And she honoureth him, crying: O Dionysius, boast of the faithful, rejoice!

Share the feast of Dionysios of Zakynthos with an icon greeting ecard.