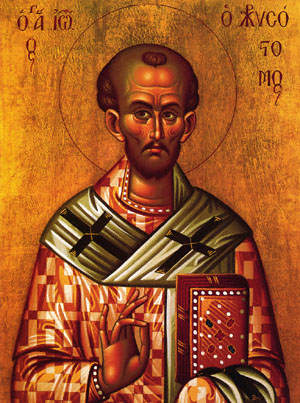 This greatest and most beloved of all Christian orators was born in Antioch the Great in the year 344 or 347; his pious parents were called Secundus and Anthusa. After his mother was widowed at the age of twenty, she devoted herself to bringing up John and his elder sister in the nurture and admonition of the Lord. John received his literary training under Anthragathius the philosopher, and Libanius the sophist, who was the greatest Greek scholar and rhetorician of his day. Libanius was a pagan, and when asked before his death whom he wished to have for his successor, he said, "John, had not the Christians stolen him from us." With such a training, and with such gifts as he had by nature, John had before him a brilliant career as a rhetorician. But through the good example of his godly mother Anthusa and of the holy Bishop Meletius of Antioch (see Feb. 12), by whom he was ordained reader about the year 370, he chose instead to dedicate himself to God. From the years 374 to 381 he lived the monastic life in the hermitages that were near Antioch. His extreme asceticism undermined his health, compelling him to return to Antioch, where Saint Meletius ordained him deacon about the year 381. Saint Meletius was called to Constantinople later that year to preside over the Second Ecumenical Council, during which he fell asleep in the Lord. In 386 Bishop Flavian ordained John presbyter of the Church of Antioch. Upon his elevation to the priesthood his career as a public preacher began, and his exceptional oratorical gifts were made manifest through his many sermons and commentaries. They are distinguished by their eloquence and the remarkable ease with which rich imagery and scriptural allusions are multiplied; by their depth of insight into the meaning of Scripture and the workings of God's providence; and, not least of all, by their earnestness and moral force, which issue from the heart of a blameless and guileless man who lived first what he preached to others. Because of his fame, he was chosen to succeed Saint Nectarius as Patriarch of Constantinople. He was taken away by stealth, to avoid the opposition of the people, and consecrated Patriarch of Constantinople on February 28, 398, by Theophilus, Patriarch of Alexandria, who was to prove his mortal enemy.

At that time the Emperor of the East was Arcadius, who had had Saint Arsenius the Great as his tutor (see May 8); Arcadius was a man of weak character, and much under the influence of his wife Eudoxia. The zealous and upright Chrysostom's unsparing censures of the lax morals in the imperial city stung the vain Eudoxia; through Theophilus' plottings and her collaboration, Saint John was banished to Pontus in 403. The people were in an uproar, and the following night an earthquake shook the city; this so frightened the Empress Eudoxia that she begged Arcadius to call Chrysostom back. While his return was triumphant, his reconciliation with the Empress did not last long. When she had a silver statue of herself erected in the forum before the Church of the Holy Wisdom (Saint Sophia) in September of 403, and had it dedicated with much unseemly revelry, Saint John thundered against her, and she could not forgive him. In June of 404 he was exiled to Cucusus, on the borders of Cilicia and Armenia. From here he exchanged letters with Pope Innocent of Rome, who sent bishops and priests to Constantinople requesting that a council be held. Saint John's enemies, dreading his return, prevailed upon the Emperor to see an insult in this, and had John taken to a more remote place of banishment called Pityus near the Caucasus. The journey was filled with bitter sufferings for the aged bishop, both because of the harshness of the elements and the cruelty of one of his 310 guards. He did not reach Pityus, but gave up his soul to the Lord near Comana in Pontus, at the chapel of the Martyr Basiliscus (see May 22), who had appeared to him shortly before, foretelling the day of his death, which came to pass on September 14, 407. His last words were "Glory be to God for all things." His holy relics were brought from Comana to Constantinople thirty-one years later by the Emperor Theodosius the Younger and Saint Pulcheria his sister, the children of Arcadius and Eudoxia, with fervent supplications that the sin of their parents against him be forgiven; this return of his holy relics is celebrated on January 27.

Saint John was surnamed Chrysostom ("Golden-mouth") because of his eloquence. He made exhaustive commentaries on the divine Scriptures and was the author of more works than any other Church Father, leaving us complete commentaries on the Book of Genesis, the Gospels of Saints Matthew and John, the Acts, and all the Epistles of Saint Paul. His extant works are 1,447 sermons and 240 epistles. Twenty-two teachers of the Church have written homilies of praise in his honour. Besides his feasts today and on January 27, he is celebrated as one of the Three Hierarchs on January 30, together with Saint Basil the Great and Saint Gregory the Theologian.

It should be noted that, because September 14 is the Exaltation of the Cross, the Saint's memory has been transferred to this day.

The grace of your words illuminated the universe like a shining beacon. It amassed treasures of munificence in the world. It demonstrated the greatness of humility, teaching us by your own words; therefore, O Father John Chrysostom, intercede to Christ the Logos for the salvation of our souls.

You received divine grace from Heaven, and by your own lips taught all to worship the One God in Trinity. All-blessed, venerable John Chrysostom, deservedly, we praise you for you are a teacher clearly revealing things divine.

Share the feast of John Chrysostom, Archbishop of Constantinople with an icon greeting ecard.