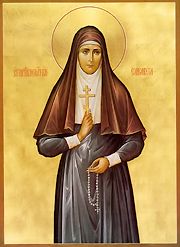 Grand Duchess Elizabeth, a grand-daughter of Queen Victoria of England and elder sister of Empress Alexandra of Russia (see July 4), was one of the most illustrious women of her day, known throughout Europe not only for her high birth and graceful beauty, but also for her modesty and goodness of heart. After marrying Grand Duke Sergius Alexandrovich, she converted to Orthodoxy, although this was not required of her by her position. After the assassination of her husband in 1905, Grand Duchess Elizabeth withdrew from public life, founding the convent of Saints Martha and Mary, of which she became the superior. There she dedicated herself to prayer, fasting, tending the sick, and caring for the poor. After the Bolsheviks seized power, she was exiled to the Urals, where she and those with her were martyred in 1918 when they were cast alive into an abandoned mine. The Novice Barbara followed Saint Elizabeth into exile. When she was separated from the Grand Duchess, Barbara asked to be allowed to join her again; to terrify her, the Bolsheviks told her that she would be allowed to do this, but only if she were prepared for unheard-of torments and a violent death. To their amazement, she consented, and was deemed worthy of martyrdom with the Grand Duchess. Their holy relics were recovered and taken through Russia to China, and came to rest in the Convent of Saint Mary Magdalene in Jerusalem. When their reliquaries were opened in 1981, their bodies were found to be partially incorrupt, and sweet with the odour of sanctity. With them are also commemorated their fellow Martyrs: Grand Duke Sergius Mikhailovich; Princes John, Constantine, and Igor, the brethren; Prince Vladimir Paley; and Theodore Remez.

Emulating the Lord's self-abasement on the earth, thou didst forsake royal mansions to serve the poor and disdained, overflowing with compassion for the suffering. And taking up a martyr's cross, thou in meekness didst perfect the Saviour's image within thee. Wherefore, with Barbara, entreat Him to save us all, O wise Elizabeth.

In the midst of worldliness, thy mournful heart dwelt in Heaven; in barbaric godlessness, thy valiant soul was not troubled: thou didst long to meet thy Bridegroom as a confessor, and He found thee worthy of thy martyric purpose. O Elizabeth, with Barbara, thy brave companion, pray to thy Bridegroom for us.

Share the feast of Holy New Martyrs Elizabeth the Grand Duchess and the Novice Barbara with an icon greeting ecard.