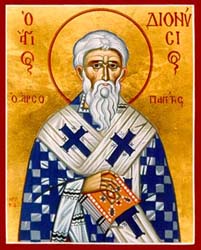 This Saint was from Athens, a learned man, and a member of the famous judicial court of Mars Hill (in Greek Aeros Pagos, hence the name Areopagite (see Acts 17:19-34). When Saint Paul preached in Athens, he was one of the first there to believe in Christ, and, according to some, became the first bishop of that city. Others say -- and this may be more probable--that he was the second Bishop of Athens, after Saint Hierotheus, whom Dionysios calls his friend and teacher "after Paul" (On the Divine Names, 3:2). With Saint Hierotheus he was also present at the Dormition of the most holy Theotokos; the Doxasticon of the Aposticha for the service of the Dormition is partly taken from a passage in Chapter III of On the Divine Names. According to ancient tradition, he received a martyr's end (according to some, in Athens itself) about the year 96.

Apolytikion of Dionysios the Areopagite

Since thou hadst been instructed in uprightness thoroughly and wast vigilant in all things, thou wast clothed with a good conscience as befitteth one holy. Thou didst draw from the Chosen Vessel ineffable mysteries; and having kept the Faith, thou didst finish a like course, O Hieromartyr Dionysios. Intercede with Christ God that our souls be saved.

Kontakion of Dionysios the Areopagite

In spirit, thou dist pass through Heaven's gates, instructed by the great Apostle who attained to the third Heaven's heights, and wast made rich in all knowledge of things beyond speech; and then thou, O Dionysios, didst illuminate them that slumbered in the darkness of their ignorance. Hence we all cry out: Rejoice, O universal Father.

Share the feast of Dionysios the Areopagite with an icon greeting ecard.