Myron the Martyr of Cyzicus 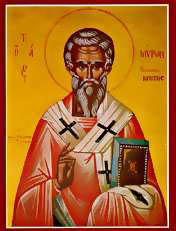 Saint Myron was a priest during the reign of Decius, when Antipater was ruler of Achaia. On the day of our Lord's Nativity, Antipater entered the church to seize the Christians and punish them. Saint Myron, kindled with holy zeal, roundly insulted Antipater, for which he was hung up and scraped, then cast into a raging furnace, but was preserved unharmed. When Myron refused to worship the idols, Antipater commanded that strips be cut in the Saint's flesh from his shoulders to his feet; the Saint took one of the strips of his flesh and flung it in the tyrant's face. He was beaten, and scraped again upon his beaten flesh; then he was thrown to wild beasts, but when Antipater saw them leaving off their fierce nature and protecting the Saint from harm, he was overcome with unbearable shame and slew himself. The Saint was then sent to Cyzicus, where the proconsul had him beheaded, about the year 250.

Since thou didst love Christ from childhood, O all-lauded one, and strictly didst keep His precepts and divine commands, thou didst run whole-heartedly unto Him, O Myron, and foundest rest and with Angels glorifiest Him, while asking divine forgiveness for us all.

Share the feast of Myron the Martyr of Cyzicus with an icon greeting ecard.