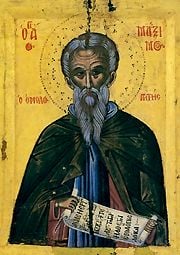 The divine Maximus, who was from Constantinople, sprang from an illustrious family. He was a lover of wisdom and an eminent theologian. At first, he was the chief private secretary of the Emperor Heraclius and his grandson Constans. But when the Monothelite heresy became predominant in the royal court, out of hatred for this error the Saint departed for the Monastery at Chrysopolis (Scutari), of which he later became the abbot. When Constans tried to constrain him either to accept the Monothelite teaching, or to stop speaking and writing against it - neither of which the Saint accepted to do - his tongue was uprooted and his right hand was cut off, and he was sent into exile, where he reposed in 662. At the time only he and his few disciples were Orthodox in the East. See also January 21.

Apolytikion of Maximus the Confessor

You are a guide of Orthodoxy, a teacher of piety and modesty, a luminary of the world, the God inspired pride of monastics. O wise Maximos, you have enlightened everyone by your teachings. You are the harp of the Spirit. Intercede to Christ our God for the salvation of our souls.

Kontakion of Maximus the Confessor

Let us the faithful praise with fitting hymns that lover of the Holy Trinity, great Maximus, who clearly taught the divinely-given Faith: that we should give glory unto Christ our God, Who, though but one hypostasis, hath in very truth two natures, wills, and energies. Let us cry to him: Rejoice, divine herald of the Faith.

Share the feast of Maximus the Confessor with an icon greeting ecard.