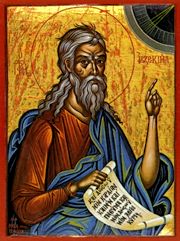 The Prophet Ezekiel ("God is strong") was the son of Buzi and a priest by rank. He was taken captive and brought to Babylon during the reign of Jechonias. In the fifth year of this captivity, about 594 or 593 B.C., he began to prophesy. Having prophesied for about twenty-eight years, he was murdered, it is said, by the tribe of Gad, because he reproached them for their idolatry. His book of prophecy, divided into forty-eight chapters, is ranked third among the greater Prophets. It is richly filled with mystical imagery and marvelous prophetic visions and allegories, of which the dread Chariot of Cherubim described in the first Chapter is the most famous; in the "gate that was shut," through which the Lord alone entered, he darkly foretold of the Word's Incarnation from the Virgin (44:1-3); through the "dry bones" that came to life again (37:1-14), he prophesied both of the restoration of captive Israel, and the general resurrection of our race.

As we celebrate the memory of Thy Prophet Ezekiel, O Lord, through him we beseech Thee to save our souls.

Share the feast of Ezekiel the Prophet with an icon greeting ecard.