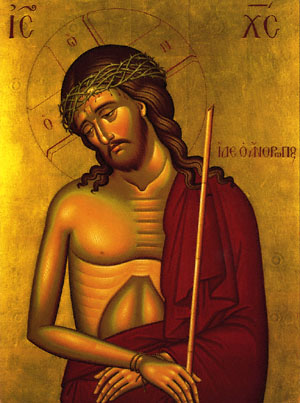 The holy Passion of our Saviour begins today, presenting Joseph the all-comely as a prefiguring of Christ. He was the eleventh son of Jacob, and his first son by Rachel; because he was so beloved of his father, his own brethren came to envy him and cast him into a pit. Later they sold him to foreigners for thirty pieces of silver, who later sold him again in Egypt. Because of his virtue, his master gave him much authority in governing his house; because he was fair of countenance, his master's wife sought to draw him into sin with her; because of his chastity, he refused her, and through her slanders was cast into prison. Finally, he was led forth again with great glory and was honoured as a king. He became lord over all Egypt and a provider of wheat for all the people. Through all this, he typifies in himself the betrayal, Passion, death, and glorification of our Lord Jesus Christ (see Gen., chapters 37, 39 41).

To the commemoration of Patriarch Joseph is added also the narration concerning the fig tree, which on this day was cursed and subsequently dried up because of its unfruitfulness. It portrayed the Jewish synagogue, which had not produced the fruit demanded of it, that is, obedience to God and faith in Him and which was stripped of all spiritual grace by means of the curse (Matt. 21:18-20).

See! The Bridegroom sets forth in the dead of night. And blessed is that servant whom he shall find on watch; unworthy the one he shall come upon lazing. See to it, soul, that sleep does not overtake you, lest you be given up to death and be shut out of the kingdom. Bestir yourself, then, and sing out: "Holy, holy, holy are You, our God; through the protection of the bodiless powers, save us."

Jacob mourned the loss of Joseph, while the noble one rode in a chariot, honored as royalty. For having spurned the enticements of the Egyptian woman, he was in turn glorified by Him who knows the hearts of men and bestows an incorruptible crown.

Share the feast of Holy Monday with an icon greeting ecard.