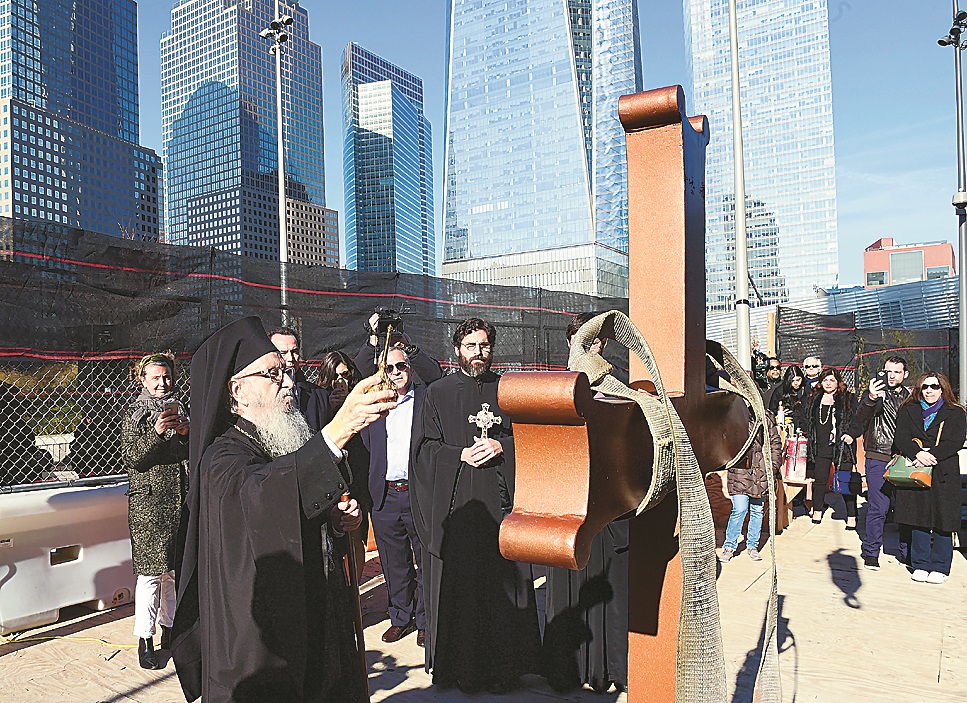 Archbishop Demetrios blesses the temporary steel cross to be placed atop the dome. The 7-foot cross was placed on the 50-foot wide dome. The interim cross will be replaced by a permanent cross when the church is completed, sometime in the spring of 2018.
© GOA/D. Panagos & Orthodox Observer
Jim Golding

NEW YORK – The herculean effort to rebuild St. Nicholas at the World Trade Center reached a monumental milestone on Nov. 28 with an afternoon topping-off ceremony at the site of the new church and national shrine.

Traditionally, the ceremony is a builders’ rite held when the last beam (or equivalent) has been placed on top of a structure and a small tree or leafy branch is temporarily installed on the roof.

As befitting a church, rather than a tree or branch, a temporary nearly seven–foot steel cross was hoisted to the top of St. Nicholas.

Following the program with several speakers, Archbishop Demetrios conducted a brief prayer service and aghiasmo prior to the lifting of the cross.

Jerry Dimitriou, executive director for administration at the Archdiocese welcomed those in attendance, including several news media organizations.

“This is a very, very emotional day for all of us,” said Dimitriou, who has been overseeing the construction phase of the project and has been actively involved in the effort over the past 15 years. He praised the parishioners of the original St. Nicholas parish who persevered in keeping the church functioning and not selling the property for the construction of the original World Trade Center towers in the late 1960s.

Other speakers included John Dolan, project executive for Skanska Construction, the main contractor for the past two years; who expressed his gratitude for being involved in the project; Patrick J. Foye, executive director of the Port Authority of New York & New Jersey; and Steve Plate, chief of capital projects for the Port Authority.

Foye noted the “steadfast support” from New York Gov. Mario Cuomo in bringing about the successful undertaking of the project.

Praising the perseverance of the members of the Archdiocese, Plate stated that, “People who finish the race and never give up always succeed. God bless you all on this special day.”

Concluding the program, Archbishop Demetrios recognized the efforts of those who have tenaciously supported the project to rebuild St. Nicholas from its inception, especially the late Michael Jaharis, and Fr. Alexander Karloutsos.

His Eminence said the message of St. Nicholas is that of “an opening toward a non-material reality – the presence of God,” and that the mission and of this church will be to offer a vision “beyond the bolder imagination.”

It will be a meaning that the pain experienced in the dark days of 9/11 “led to the triumph of the human will.”

In the brief service following the program, that included prayers and hymns relating to the cross and to St. Nicholas, the Archbishop blessed the temporary cross with holy water.

Estimated completion date of the church and national shrine is expected to be spring 2018, when the permanent cross will be installed.

The “topping out” a new building can be traced to the ancient Scandinavian religious rite of placing a tree atop a new building to appease the tree-dwelling spirits displaced in its construction.

It was long an important component of timber frame building. The practice migrated initially to England and throughout Northern Europe, then to the Americas.

Further coverage can be seen at www.stnicholaswtc.org and the Facebook page for SNC.