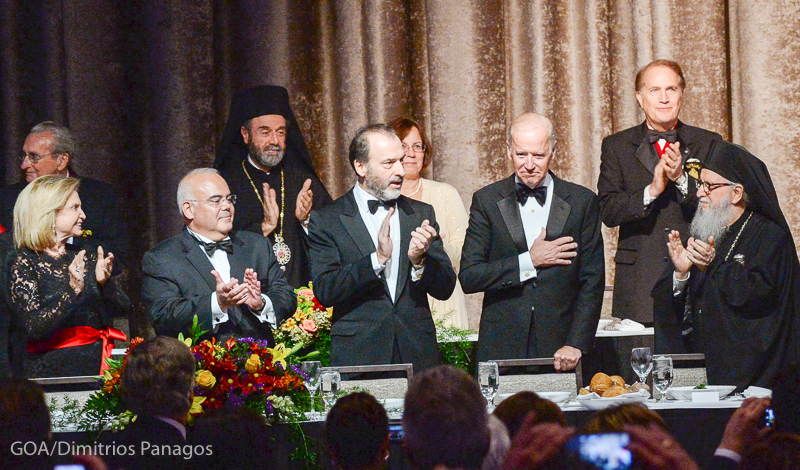 NEW YORK – Archbishop Demetrios of America, Exarch of the Ecumenical Patriarchate in the Western Hemisphere together with Archons’ National Commander Dr. Anthony Limberakis presented the Athenagoras Human Rights Award to Vice President of the United States Joe Biden. The award was presented during the Order of St. Andrew the Apostle, Archons of the Ecumenical Patriarchate Award Banquet held at the New York Hilton, Oct. 17, 2015.

The Order of St. Andrew “is honored to honor you,” said Archons National Commander Dr. Anthony Limberakis to the Vice President as he presented the award. Dr. Limberakis spoke of the history and the meaning of the award, the personality and the ministry of the “spiritual giant” Patriarch Athenagoras of blessed memory who toiled as a partner of the United States in defense of freedom and liberty. He further presented the fight of the Order of St. Andrew in defense of human rights, religious freedom and the rights of the Ecumenical Patriarchate.

“The core of the spiritual mission of the Ecumenical Patriarchate,” he said, “is freedom, freedom in Christ to live at the utmost of our human potential.”

Dr. Limberakis praised Vice President Biden as “a constant friend and a voice of advocacy of the free excercise of the spiritual mission of the Ecumenical Patriarchate.”

“We thank you for all you have done and all you will do in the future for the Ecumenical Patriarchate,” he concluded. 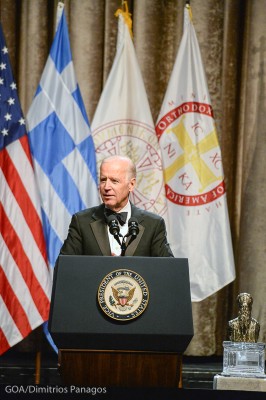 tribute to the Vice President.

“This is maybe the greatest honor I have ever received in my public life,” said the Vice President in accepting the award. Biden recounted the fulfilling and moving spiritual experience of his two visits to the Ecumenical Patriarchate, praised Ecumenical Patriarch Bartholomew and said that he is the most blessed man he has ever met in his life, a saintly man. The Vice President said that throughout his career, the absolute commitment to freedom of religion as something we posses simply because we are children of God, has been a guiding principle. Speaking about the Ecumenical Patriarchate he said that the Greek Orthodox Church must have the right to control its own destiny free of the influence of any government at all.

Archbishop Demetrios, in his response, congratulated and praised Vice President Biden as worthy “Axios” of the Athenagoras Human Rights Award.

“The Vice President is someone who fights for freedom in the real sense,” said the Archbishop and explained “freedom has just one limit, my freedom is absolute up to the point it infringes upon the freedom of the person next to me; the next person is the limit of my freedom. If there is no such a limit, then freedom looses value and meaning and becomes an arbitrary thing causing lots of problems.”

His Eminence citing the French philosopher Jean Paul Sartre who had written that “the other person is my enemy,” asked rhetorically why and answered: “Because he or she –the other person- limits my freedom.”

The Archbishop maintained that, “the other is not your enemy, but someone who is enhancing your freedom, preventing this freedom from becoming something uncontrolled and arbitrary,” and added: “This Vice President exemplifies this kind of freedom, freedom but with respect to the other person, so there is mutuality in our freedom; and the Athenagoras Award has this principle as its basis.”

Archon Michael Psaros introduced the dais guests at the beginning of the program, the national anthems were sang by Eva Agathis and Archon John Halecky, Jr. offered the welcoming remarks. Archon Mike Emmanuel, chief congressional correspondent and senior political correspondent for Fox News was the Master of Ceremonies. Grigoris Maninakis provided the music. 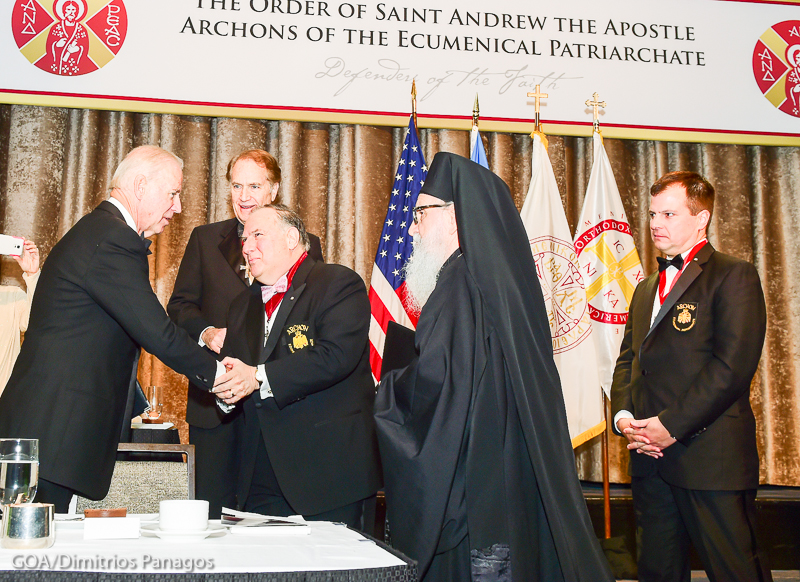