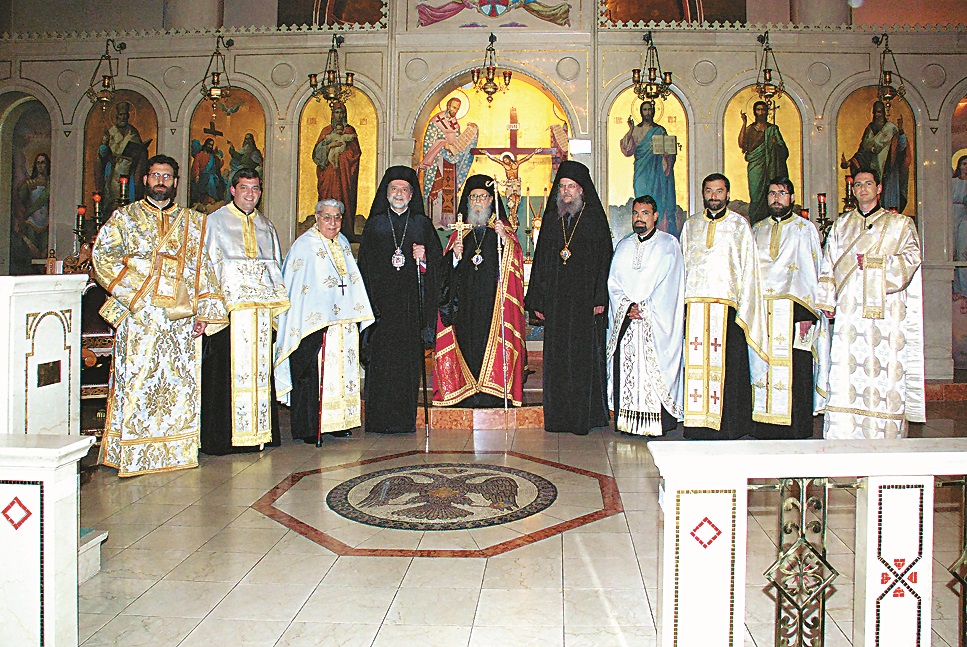 TOLEDO, Ohio -- The 100th anniversary celebration of Holy Trinity Cathedral, “Honor the Past – Embrace the Future,” culminated June 26-28 in a series of weekend events that began with a family picnic and reunion on Friday evening, June 26.

They led the psaltai and congregation in responses.

Torrential rains and 40 mph wind gusts failed to dampen the spirit and well-wishes of the 400 parishioners and guests attending and, afterward, “grazing” at a dinner reception in the community center donated by 19 restauranteurs and parishioners.

A Memory Room outfitted with parishioners’ vintage family photographs and narratives, along with parish archival documents was a featured attraction. Toledo Mayor Paula Hicks-Hudson presented the parish with a proclamation from the city and offered Archbishop Demetrios a key to the City of Toledo.

A Centennial History In Music was presented by Jo-Anne Chrysochoos and Evangelia Leontis with a historical narration by Chris Zervos.

Metropolitan Nicholas presented the parish with the historical documents that elevated the parish to a cathedral in 1987 largely through the efforts of then–parish council President Don E. Stathulis.

Archbishop Demetrios spoke on the uniqueness of the evening’s events and the relativity of time in our lives. Tony Geftos, local ABC anchor, was master of ceremonies.

Each guest was given a symbolic mortgage note collected in trays and burned by the Archbishop, with assistance from parish council President George Sares and Treasurer Dennis Lawrence.

Archbishop Demetrios conferred the title of Economos on Fr. Larry Legakis, cathedral dean, to a resounding “Axios!” before joining parish youth at a post liturgy breakfast.

The weekend’s events were chaired by Kathy and Bryan Chaka and Karen and Michael George, capping off a year-long celebration begun in July, 2014.

The City of Toledo is at the mouth of the Maumee River at the western end of Lake Erie. Holy Trinity Cathedral in Toledo, Ohio lies at the northern threshold to the city’s central business district in the Vistula Historic District.

The parish, formed in 1914 and formally incorporated by the State of Ohio in 1915, has met the spiritual and communal needs of Orthodox Christians in Northwest Ohio and Southeast Michigan.

The parish ministers to approximately 350 families.

Fr. Larry Legakis, was assisted by Fr. Chris W. Hadgigeorge (retired) and a parish council of 12. The parish’s archons are Paul G. Sieben and Jerry Bernacki.

The parish is a “full service” parish with a Church School, Greek language program, choir and psaltai. Youth programs include HOPE and JOY, GOYA and Summer of the Arts.

The parish is further supported by an active Philoptochos which meets all of its national outreach ministries and supports diocesan and local ministries as well.

A seniors’ group, known as Young-At-Heart, ministers to parishioners who are 55+. Fraternal organizations, such as AHEPA, Daughters of Penelope and Maids of Athena remain active and vital. The parish interacts with other Orthodox jurisdictions in the Inter-Orthodox Council of Greater Toledo, mostly during Great Lent and at feastdays.

The parish is involved with the Mid-Eastern Federation of Greek Orthodox Church Musicians and has hosted four of its conventions.

Holy Trinity Cathedral began hosting an out-door festival in 1971 which has been voted by Toledoans as the “best” ethnic festival based on its food and friendly service.

Annually, the Greek festival occurs the weekend after Labor Day, and requires the work of 500 volunteers to execute.