Print The Team Behind the Missions Teams 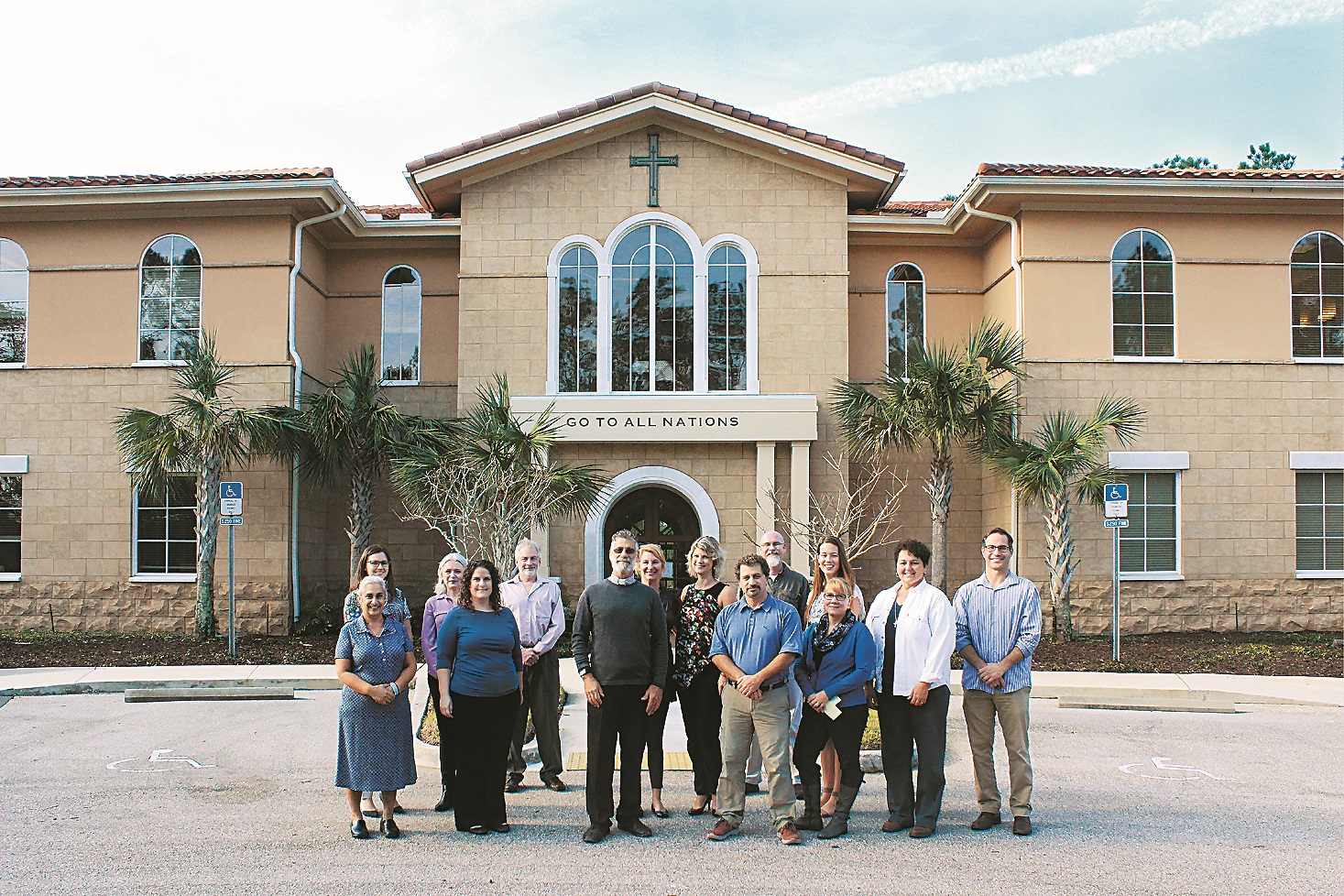 ST. AUGUSTINE, Fla. – They’re on a mission from God.

The Orthodox Christian Mission Center (OCMC) exists to carry out Christ’s “Great Commission” in Matthew 28:19 that He charged to His disciples, “Go therefore and make disciples of all nations, baptizing them in the name of the Father and the Son and of the Holy Spirit.”

To accomplish this divinely directed undertaking, the OCMC supports hundreds of missionaries that it sends to nations throughout the world to bring the gospel to people hungry for the Word of God.

OCMC is an agency of the Assembly of Canonical Orthodox Bishops of the United States of America.

OCMC’s origins date to 1959-61, when Fr. Alexander Veronis, studying at the University of Athens, was inspired by talks of then-Deacons Anastasios Yiannoulatos and Demetrios Trakatellis on the importance of missions. Returning to the U.S., Fr. Veronis went on to organize the first missionary program of the Archdiocese and served as executive director for many years.

Among those serving as missionaries in the 1960s was Fr. Eugene Pappas, now pastor of Three Hierarchs Church in Brooklyn, N.Y.

In 1984, Archbishop Iakovos named Fr. Dimitrios Couchell as director of St. Photios National Shrine and of the missions program, which operated in an upstairs office of the Shrine until moving to larger quarters near Flagler College a few blocks away.

As the missions program expanded, the office moved to rented office space near Flagler College where it operated until the new Archbishop Anastasios and Archbishop Demetrios Training and Administration Building opened in 2009.

Fr. Martin Ritsi was named as executive director in 1998, having served as a missionary in Kenya and Albania, along with Presvytera Renee, for 10 years. After graduating from Holy Cross School of Theology, he served in his home parish in Irvine, Calif., before becoming a missionary.

The present OCMC staff consists of 25 who work in the Development, Missionary Training, Mission Teams and Finance offices. They provide support to about 25 long-term missionaries and nearly 200 short-term missionaries who go through the training program in St. Augustine before going into the field.

“We are striving first to bringing people to Christ, said Fr. Martin. We are establishing the Church striving to be love, care for the poor, care for the sick and the needy in about 30 countries around the world.”

Some of these locations include post-communist societies and mountain communities in Latin America.

Fr. Martin noted the following criteria for pursuing missionary efforts: communities that have no knowledge of Christ; or at the invitation of an Orthodox bishop in the region. As an example, he cited Scandinavia, traditionally a Lutheran bastion, but which recent polls show that only about 20 percent of the population believes in God; and to those who would be receptive to missionary activity, such as a group of about 100,000 native peoples in a remote area of Guatemala who petitioned to come into the Orthodox Church.

“Our goal is to reach out to people that don’t believe, where the population is not Christian, and where the gospel hasn’t been preached,” Fr. Martin said.

The permanent staff at the center includes the following members, including several women seminary graduates, who bring a variety of talents to the OCMC.

Alex Goodwin – The director of annual giving and marketing is a 10-year veteran of the OCMC, and previously worked in marketing at Light and Life Publishing in Minneapolis under Fr. Anthony Coniaris.

After serving on a mission team in 2006, he joined the OCMC as communications director before assuming his present position where he oversees the organization’s internet initiative, producing its newsletter and donor recognition articles and writing stories from the field “so everyone can know the impact we have,” he said. He also oversees the direct mail and recurring gift programs. ([email protected])

Kenneth Kidd – As the development officer, Kenneth travels the country throughout the year visiting 25 to 30 parishes. He speaks at retreats and youth camps “to make missions real in their lives and build enthusiasm,” he said, so that his visit “may ignite something in someone’s heart to serve the Church.”

Fund-raising is another aspect of his responsibilities.

Having grown up in the Presbyterian Church, he became chrismated in the Antiochian Orthodox Church in graduate school in West Virginia where he majored in social work. He served as an assistant director of a homeless program in Ashville, N.C., before arriving at the OCMC in 2016. ([email protected])

Presvytera Renee Ritsi – Presvytera works in the Mission Teams Office and leads mission trips, conducts women’s retreats in Albania, sponsored in part by the National Philoptochos, and occasionally travels to remote regions in Kenya where the Turkana people reside, along with Fr. Martin. She also conducts team orientations in locations that include Alaska. ([email protected])

Three other women who occupy key positions at the OCMC are graduates of HCHC and one is from St. Vladimir’s.

Sara Staff (MA in Theology, St. Vladimir’s) has responsibility for communications, both print and online, serving as marketing coordinator, graphic designer, social media, twitter and facebook contributor, press release writer and program monitor liaison to the missionaries and supplies them with prayer cards.

The Arkansas native joined the OCMC in May 2016. ([email protected])

Sarahjeane Campbell (MA in theological studies, Holy Cross 2004) has worked at the OCMC since June 2015.

A Florida native who grew up in Manhattan, she previously served as a secretary/administrator at Holy Trinity Archdiocesan Cathedral under the Rev. Dr. Robert Stephanopoulos, and at Archdiocese headquarters, transcribing speeches of Archbishop Demetrios.

At the OCMC, as executive assistant to Fr. Ritsi, she organizes and coordinates events, performs developmental work and has responsibility for correspondence.

A steward of the OCMC since age 12, Ms. Campbell credited her Holy Cross training for preparing her. “It equipped me to learn more about the faith and gave me the tools, spiritually and intellectually, to serve the Church. ([email protected])

She began her Church service while still a teenager in Illinois, writing movie reviews and doing youth and young adult ministry work at her parish before college. After earning an undergraduate degree in education at Illinois Wesleyan University and her master’s at Holy Cross, she worked in the Department of Youth and Young Adult Ministries at Archdiocesan headquarters in New York, and for the IOCC in the late 1980s before marrying Edward Kelly (of blessed memory), who became an Antiochian Orthodox priest. They served parishes in Cedar Rapids, Iowa and, later, Phoenix, where she was youth director at Holy Trinity Greek Orthodox Cathedral and taught in public school. After her husband died, she moved to St. Augustine. As a member of the local Greek Orthodox church, Holy Trinity, she is serving her first term as parish council president.

The Agape canister fund-raising program is a familiar one for many parishes of the Archdiocese, who receive the containers and coin boxes for donations. Funds from the program support humanitarian and missions projects; health clinics, summer camps and feeding programs.

Through SAMP, 376 Orthodox priests in 16 countries receive a stipend of $50 a month. It is a special program that is not part of the general fund budget and is supported by donations. “We ask donors to sponsor a priest,” Markella said. “Some give 10 dollars a month, others give $50. We write to the donors to tell them about the priest they are serving and how Orthodoxy is progressing in that country.” Some priests serve three or four parishes. She also noted that many parish Philoptochos chapters are large supporters of the program. ([email protected])

Andrew J. Lekos – The Missions Teams director came to the OCMC in 1992, having also served as St. Photos Shrine director for two years.

After completing his studies at the University of Rhode Island in 1989, the Cranston, R.I., native went on his first short term mission term to West Africa. “My life had change,” he said. I came back with a different attitude; my eyes opened in a different way.” He went on another mission trip in 1991.

At the OCMC, Andrew develops project concepts and proposals, maintains contact with Orthodox hierarchs oversees having missions teams in their jurisdictions, participates in recruiting and the application and selection process and supervises short-term missions with assistance from Presvytera Renee. They annually field about 20 mission teams of 10 members each who serve from 11 to 13 days. ([email protected])

Finance Director Jack Klees and his staff, along with Fr. Martin, administers an operating budget of only $3.2 million per year. The Archdiocese provides about $60,000 annually; other jurisdictions of the Assembly of Bishops also contribute various amounts.

The OCMC also relies on direct donations from parishes and individual donors. “Only about 20 percent of the parishes send contributions,” Fr. Martin noted. Major organizations providing financial support include the Archbishop Iakovos Leadership 100 Endowment Fund and the National Philoptochos Society.

Prospective missionaries must be selffunded, providing for their own living and ministry expenses.

In the past, the capital campaign to build the $6 million training and administrative center received substantial support from two of the largest contributors, Michael Jaharis and Nicholas Bouras. Jaharis also provided an endowment fund to help with the upkeep of the building.

The OCMC does not receive government funding.