The Greek Orthodox Archdiocese of America and the Greek American Omogeneia participate in the mourning and suffering caused by the latest fires in Attica, Greece

Print The Greek Orthodox Archdiocese of America and the Greek American Omogeneia participate in the mourning and suffering caused by the latest fires in Attica, Greece
English Ελληνικά 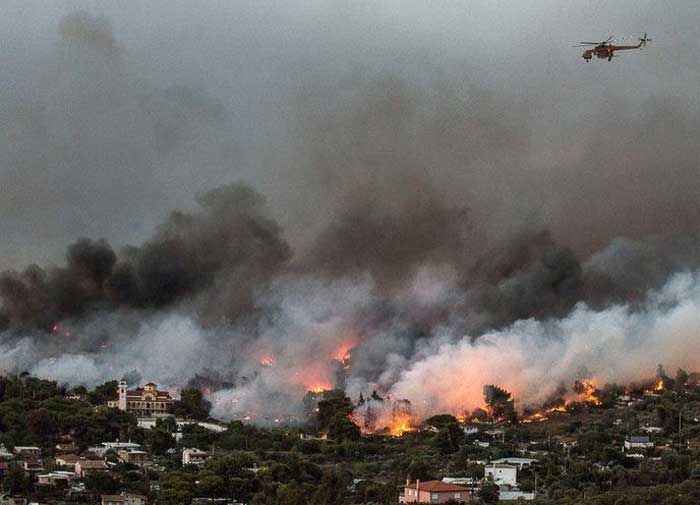 NEW YORK – The Greek Orthodox Archdiocese of America expresses its deep sorrow and agony for the disastrous fires in eastern Attica, Greece, which yesterday, July 23, 2018, destroyed inhabited areas and woodland, caused the loss of life of dozens of our fellow human beings, injured many others, and devastated homes and property. There is currently a significant number of missing persons.

“I express my sincere condolences to the people of Greece for this unexpected tragedy. As Greek Orthodox in America, we stand by and with our affected brothers and sisters in Greece and we fervently pray to God for the families impacted by this tragic calamity. We hope that favorable conditions will soon be restored for the return of life and progress in the destroyed areas,” said His Eminence Archbishop Demetrios of America.

The Archbishop sent letters of condolence to the President of the Hellenic Republic Prokopis Pavlopoulos, Prime Minister of Greece Alexis Tsipras, Archbishop Ieronymos of Athens and All Greece, Metropolitan Nikolaos of Mesogaia and Lavreotiki, and Metropolitan Kyrillos of Kifissia, Amaroussion and Oropos.

In addition, Archbishop Demetrios wrote an Encyclical to the reverend clergy and the faithful of the Greek Orthodox Archdiocese of America, asking them to hold a prayer service this Sunday, July 29, 2018 for the health, relief and support of the fire victims, and to offer a special memorial service for those who have lost their lives to this tragedy.

In the same Encyclical, the Archbishop asks the parishes to conduct a special fundraiser (to pass a special tray) on the following two Sundays to alleviate the suffering victims and offer help and hope to those whose homes and fortunes have been totally destroyed. All offers and contributions of either parishes or individuals should be sent payable to the Greek Orthodox Archdiocese of America with a memo indicating Attica Fires Relief Fund.