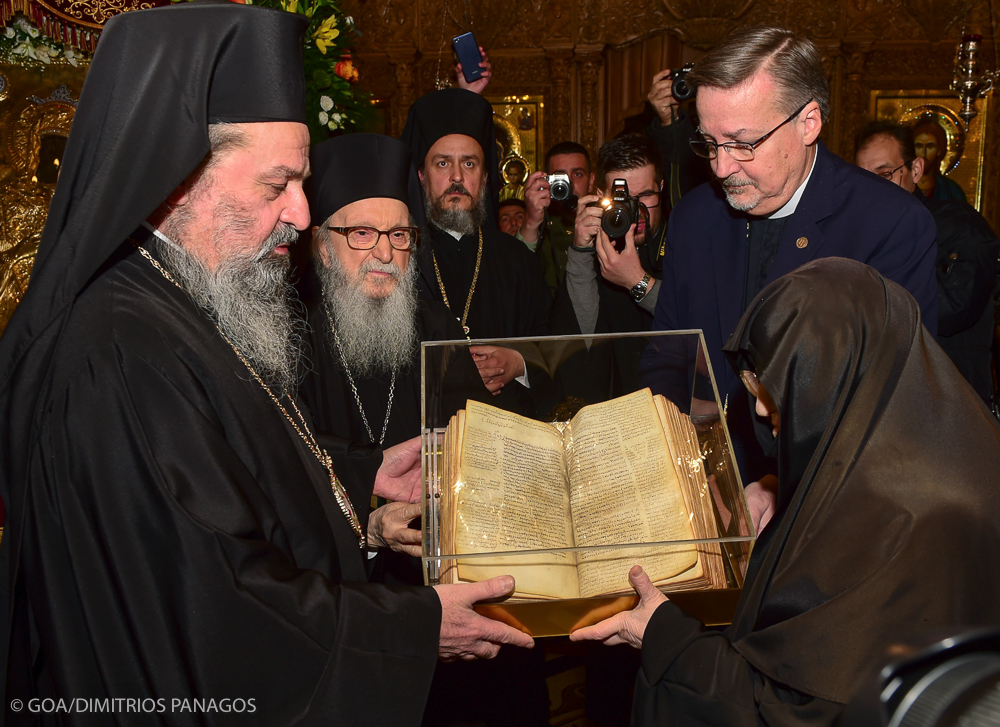 Drama, Greece – His Eminence Archbishop Demetrios, Geron of America returned yesterday, Saturday Dec. 3, 2016, a rare ninth century Greek manuscript of the complete New Testament known as Codex 1424, to its rightful owners: the Holy Metropolis of Drama and its Hierarch, His Eminence Metropolitan Pavlos of Drama; and the Monastery of Panagia Eikosifoinissa from which the manuscript had been stolen by the Bulgarians in 1917.

On the eve of the feast of Saint Barbara, the great martyr–who is the patron saint of this city– a great procession began from the location known as the springs of Saint Barbara and led to the great and ornate Cathedral of Drama, dedicated to the Entrance of Theotokos into the Temple. The city’ s philharmonic bands led the procession, and a multitude of groups followed: school children, town, professional and cultural organizations with their flags and banners. Altar boys, priests and monastics accompanied the two icons, first the historic icon of Panagia Eikosifoinissa and the icon of Saint Barbara. His Eminence Metropolitan Barnabas of Neapolis and Stavroupolis, joining the people of Drama in celebration, walked the route to the cathedral along with those who came from the United States for the events surrounding the return of the manuscript including Rev. Dr. James Nieman, President of the Lutheran School of Theology at Chicago (LSTC) and his wife JoAnn; Fr. Alexander Karloutsos and Presbytera Xanthi; and Archon George Tsougarakis, who, as a lawyer, assists the efforts of the Ecumenical Patriarchate in locating and obtaining lost or stolen manuscripts.

Archbishop Demetrios of America and Metropolitan Pavlos of Drama waited at the Cathedral for the procession to arrive and the ceremony of repatriation of the 9th century manuscript began. His Eminence the Archbishop read a message sent by His All-Holiness for the occasion.

The Archbishop in his remarks outlined three very important factors that led to the return of the manuscript. First, he said, this would not have happened if it were not for the initiative, the prestige and authority of His All-Holiness Ecumenical Patriarch Bartholomew. Secondly, he spoke of the importance of the resolve and determination of Metropolitan Pavlos in seeking and recovering stolen items from around the world. Lastly the Archbishop thanked wholeheartedly the president of the Lutheran School of Theology at Chicago Rev. Dr. James Nieman and his community who voluntarily returned the historic manuscript in a Christian manner, in peace and in love. Further the Archbishop said that the return of this ancient handwritten copy of the New Testament is the first of the signs from God; “it is a sign and a miracle, the first in a series of signs to come, as we await more like it from universities, museums and other institutions to follow the great and beautiful example of the Lutheran School of Theology at Chicago.”

Rev. Dr. James Nieman delivered his address in English, as Archdeacon Panteleimon Papadopoulos translated into Greek for all those in attendance.

Dr. Nieman, based his remarks upon the greeting from St Paul’s letter to the Philippians and to all Christians: χάρις υμιν και ειρήνη – grace upon you and peace. “The desire to live in a reality of Grace and Peace, he said, drove us to return this ancient book…we did not have to return this book we wanted to, so we could right a wrong we never caused,” he said and added: “Alongside our delight in returning it to you is a lingering sorrow. We have lost something dear, a treasure beyond reckoning that nothing can repay. That’s what makes this a true gift. We have returned it to you with sadness, yes, but also in freedom, knowing the joy it brings our friends in Christ. Consider this little book, he added, as a sign of grace (χάρις) – a token of the yet more profound gift of mercy and healing only God can bring.”

Immediately following, the manuscript codex 1424, placed in a clear plexiglass display, was brought out to the solea and was handed over by Archbishop Demetrios of America and Rev. Dr. James Nieman to Metropolitan Pavlos and Abbess Alexia of the Holy Monastery of Panagia Eikosifoinissa, as the faithful in attendance applauded.

Metropolitan Pavlos in his response, first expressed hymns of gratitude for the Theotokos, Holy Mother of God, and then expressed the gratitude of the faithful of his eparchy to Ecumenical Patriarch Bartholomew, Archbishop Demetrios of America and those who worked together and contributed to the successful return of the manuscript.

His All-Holiness, he said, is the flag bearer of this struggle for justice for the Holy Monastery of Panagia Eikosifoinissa, and from his example we derive strength and resolve to continue. He also spoke of the long and significant history and role of the Monastery of Panagia Eikosifoinissa in the history of Orthodoxy and Greece. He said that the thoughtful words of Dr. Nieman should reach the ears of those neighbors who ransacked the monastery and still refuse to recognize their acts and return all that was taken.

Metropolitan Pavlos awarded the highest honor of the Church of Drama, the Golden Medal of Saint Chrysostom of Smyrna to Archbishop Demetrios, Dr. James Nieman, Fr. Alexander Karloutsos and Archon George Tsougarakis, as a token of appreciation.

The last part of the ceremony included the signing of official documents marking the return of the Codex by all participants named above and other contributors.

Following the ceremony, Archbishop Demetrios officiated at the magnificent byzantine service of Great Vespers for the Feast of Saint Barbara, the Great Martyr, who is the protector and patron saint of this city. Also attending the service were Metropolitan Prokopios of the neighboring Metropolis of Philippoi, Neapoleos and Thassos (city of Kavala) and visiting Metropolitan Barnabas of Neapolis and Stavroupolis (a Metropolis bordering Thessaloniki). Additionally, the three hour service was attended by all local officials and government representatives, officials of the business and education sectors, officers of the armed forces and the civil authorities and hundreds of faithful.

Today, the feast of Saint Barbara, Archbishop Demetrios concelebrated the Divine Liturgy with Metropolitan Pavlos of Drama and Metropolitan Barnabas of Neapolis and Stavroupolis at the Cathedral of Drama.

On Friday, Dec. 2, 2016, Archbishop Demetrios on his way to Drama, visited the historic monastery of Panagia Eikosifoinissa high up in the mountain of Pangaion. He officiated at doxology for the return of the codex and was given a tour of this important bastion of Orthodoxy over the centuries.

Earlier in the day Saturday Dec. 3, His Eminence, visited the Holy Monastery of the Ascension of the Lord in nearby Sipsa. In this historic monastery our righteous father Saint George (Karslidis) the New Confessor of Drama lived the last 30 years of his life and where his holy relics lay at rest. This monastery and that of Panagia Eikosifoinissa constitute the spiritual wealth of the Metropolis of Drama. The day also included a visit to the small town of Doxato, a place of massacre and martyrdom of its people, twice in its history once in 1913 and a second in 1941.

For photos from this trip visit: https://flic.kr/s/aHskMysq8a