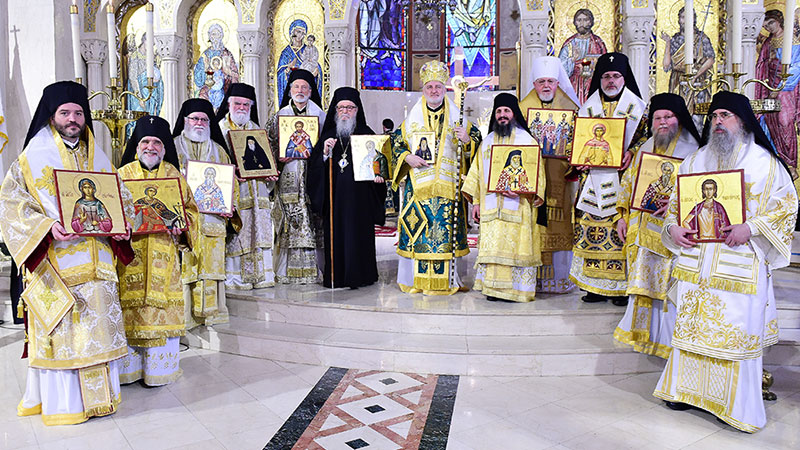 NEW YORK – On March 8, 2020, eleven Orthodox hierarchs from various canonical jurisdictions concelebrated the Divine Liturgy on the first Sunday of Lent, also known as the “Sunday of Orthodoxy,” at the Archdiocesan Cathedral of the Holy Trinity, in New York City.

At the conclusion of the service, icons were carried in a procession around the Cathedral commemorating the victory of icons, because “he who venerates the icon, venerates in it the reality for which it stands” – holiness and the reality of deification.

In his sermon, His Eminence Archbishop Elpidophoros linked the victory of the icons with the need for Orthodoxy in America to promote an image of unity and communion. The Archbishop said: “Yes, we differ in jurisdiction; we differ in ethnic background; we differ in native language; we differ in customs. But the Faith that we confess is in the One, Holy, Catholic and Apostolic Church! We believe and confess the same Nicene-Constantinopolitan Creed. We share in the Same Eucharistic Meal – the Mystical Supper of the Lord. And we look forward to the Same Glorious Resurrection of our God in His Holy Pascha."

Several choirs also participated in the services, offering chanting from the Greek, Slavonic and Georgian traditions.

To read the Encyclical for the Sunday of Orthodoxy, click here.