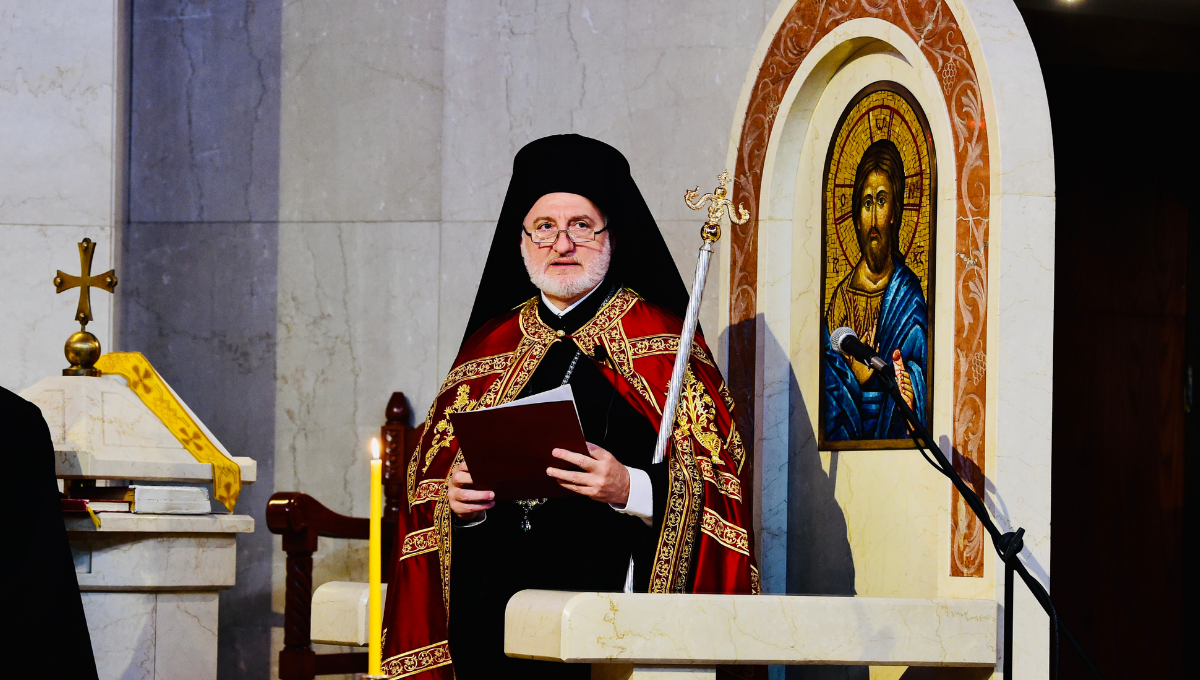 Homily for the Third Sunday of Saint Matthew

Memorial for Those Lost in Invasion of Cyprus

We come together this morning with a confluence of commemorations, which are by no means accidental. Today, we commemorate Saint Euphemia the Great Martyr, whose Holy Relics revealed the truth of the two natures of our Lord Jesus Christ to the Holy Fathers of the Fourth Ecumenical of Chalcedon. These very Relics are enshrined today at the Phanar, in the Patriarchal Cathedral of Saint George the Great Martyr and Trophy-Bearer.

We are also in the Gospel Cycle of the Evangelist Matthew, where the voice of the Lord reminds us that we cannot serve two Masters. We are either committed to the truth, or we are not.

And we have gathered here today as well to remember the souls of our lost brothers and sisters, who perished in the invasion of Cyprus forty-seven years ago. All three of these commemorations flow together like streams into the mighty river of prayer that we offer up to our Triune God on this day.

First, Saint Euphemia. She is most well known for her answer at the Council of Chalcedon, over a century after her martyrdom. Some of you may remember the story. The Fathers of the Council, which met in the year 451, could not agree on a definition concerning the true human nature of the Lord Jesus Christ – this was the time of the Monophysite controversy, which asserted only One Nature, the Divine, in our Lord.

The Fathers of the Council prepared two texts, with differing formulations, and they were in a kind of deadlock. Patriarch Anatolius, the Archbishop of Constantinople, proposed the following solution to break the standstill. He placed both texts on the breast of Saint Euphemia, and closed the casket that held her relics for three days. After the third day, the casket was opened, and what did they behold? Saint Euphemia holding the Orthodox Confession of Faith in her right hand, and the other one lying at her feet. This moment is magnificently portrayed in an icon adorning the Chamber of the Holy and Sacred Synod of the Ecumenical Patriarchate at the Phanar. What we see in this miraculous event in the life of Saint Euphemia is how the life, with which she gave the witness of the truth of Christ, was not in vain. Though her body may have died over one hundred years before the Council, her spirit was very much alive through God. And when the time came for her voice to be heard, her actions spoke louder than any words ever could. She understood, as the Gospel of the Day reminds us, that we cannot serve two Masters. Therefore, each of us must make a choice to be with the Lord, or to go our own way – a way of wandering.

Thus, the heavenly bodies were called “planets” by the Ancients, because they wandered in their orbits. And thus, we call the highest deception of the self “πλάνη” in Greek, because we selfishly wander away from God, seeking other false “Masters.”

That is why, on this Sunday, when we commemorate the Cypriots who lost their lives in the invasion so many years ago, we offer our memorial chants and prayers. We remember the truth of a unified Island Nation – one with ethnic and religious minorities, but one Nation that is Cyprus! One of the oldest civilizations in the world.

We will not forget the sacrifice and witness of those who died, some of whom remain unaccounted for and unburied to this day. Like Saint Euphemia, they are martyrs – witnesses to the truth of their homeland. And like Saint Euphemia, they will continue to bear witness to the truth of the integrity of Cyprus until the day of justice arrives for all Cypriots.

Oppression and falsehood may hold sway for a time, but righteousness and judgment will win out in the end. The lost churches and icons of Cyprus, those sacred objects and sacred stones, will be vindicated. Just as our precious Hagia Sophia will be vindicated one day as well. We all hope that we live to see it in our lifetime and the lifetime of our children, but we believe in the gift of eternal life. By the Resurrection, we will be alive to behold the ultimate justification of our Faith – just as Saint Euphemia was alive in Christ when she made the judgment in Chalcedon for the Orthodox Faith.

Therefore, my beloved Christians, let us pray with great fervor today, and remember that God is Wondrous in His Saints![*] The sacrifice of those we remember this day will not be vain. Thus, in that hope of the resurrection of our fallen brothers and sisters, we pray: Αἰωνία ἡ μνήμη αὐτῶν.