Print Archbishop Elpidophoros of America Homily at the Divine Liturgy on the Sunday after the Holy Theophany January 8, 2023 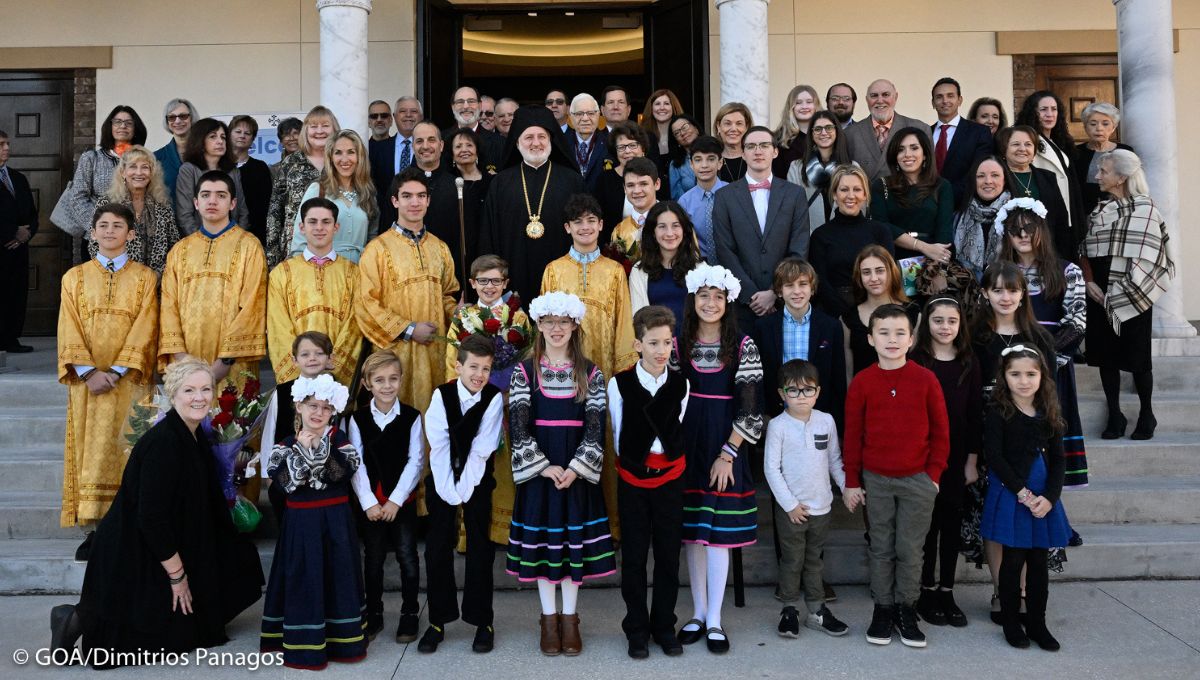 I am so very happy to be with you today at this wonderful Saint John the Divine Parish. Let us remember that “Divine,” in this case, is an older English word for “Theologian, for your Parish is dedicated to the first of the great Three Theologians of our faith:

Saint John the Evangelist and Theologian, author of the Fourth Gospel, the Three Universal Epistles, and the Book of Revelation. But there is also:

And Saint Symeon the New Theologian, whose prayers and writing speak of our direct experience of God.

Today, though, our focus is not on the title, “Theologian,” but the name – “John.”

As you may know, the name John comes – via the Greek, ̓Ιωάννης, from the Hebrew, Yohanan. The name means, “Yahweh, or God, is gracious.” Given the two famous Johns – Baptist and Theologian – no wonder that for centuries, the name, “John,” was the most popular name for a male child.

But there is something more here for us today. The graciousness and the goodness of God is applicable to every person, not just those who have this particular name. And if you think about the two Johns – the Baptist whom we celebrated yesterday, and the Theologian who is your Heavenly Patron, there is something very special about each of them. Both Johns were relatives of our Lord Jesus Christ. That may surprise some of you.

John the Baptist was the Lord’s cousin through His Holy Mother, for he was the son of her kinswoman, Elizabeth.

John the Evangelist was the son of Zebedee and Salome. But what many people miss is that Salome was the daughter of Joseph the Betrothed by his first marriage – one of his seven children. Therefore, she was an adopted sister of the Lord. That makes her children, Iakovos and John, the Lord’s nephews.

You see, my beloved friends?

The name, “God is gracious,” belongs to both these kinsmen of the Lord. Their names reveal their relationship to God, both of them as revelators. John the Baptizer presides over the Theophany that we celebrated just two days ago. In that moment at the Jordan River, the Holy Trinity was unveiled for the first time in the history of creation itself. The Father appeared in the Voice that spoke from heaven. The Spirit was seen in the form of a dove. And the Son bowed His head before his cousin, John, to receive baptism, though He had no sin.

And Saint John the Divine – he composed the Fourth Gospel that begins not with the Lord’s birth or his ministry, but begins “In the beginning.” Saint John reveals the full divinity of our Lord Jesus Christ, and he places a seal on the Holy Scripture itself by composing the Apokalypsis – the Book of Revelation.

Both of these Johns are graced by God to reveal His Only-begotten Son. The Baptist in real time at the commencement of the Lord’s earthly ministry; the Evangelist and Theologian after the resurrection through his writings. God was indeed gracious to them both!

And from His fulness have we all received, even grace upon grace.[*]

Therefore, my beloved brothers and sisters in Christ:

Let us apply ourselves to revealing Christ through our own lives, as did the Baptist and the Theologian. We do not need the name, “John” to be graciously filled with God. Any name will do, for we all bear the name, “Christian.” Through the intercessions of both these Johns – Baptist and Theologian – may we ever be shown forth to be recipients of God’s Grace. Amen.