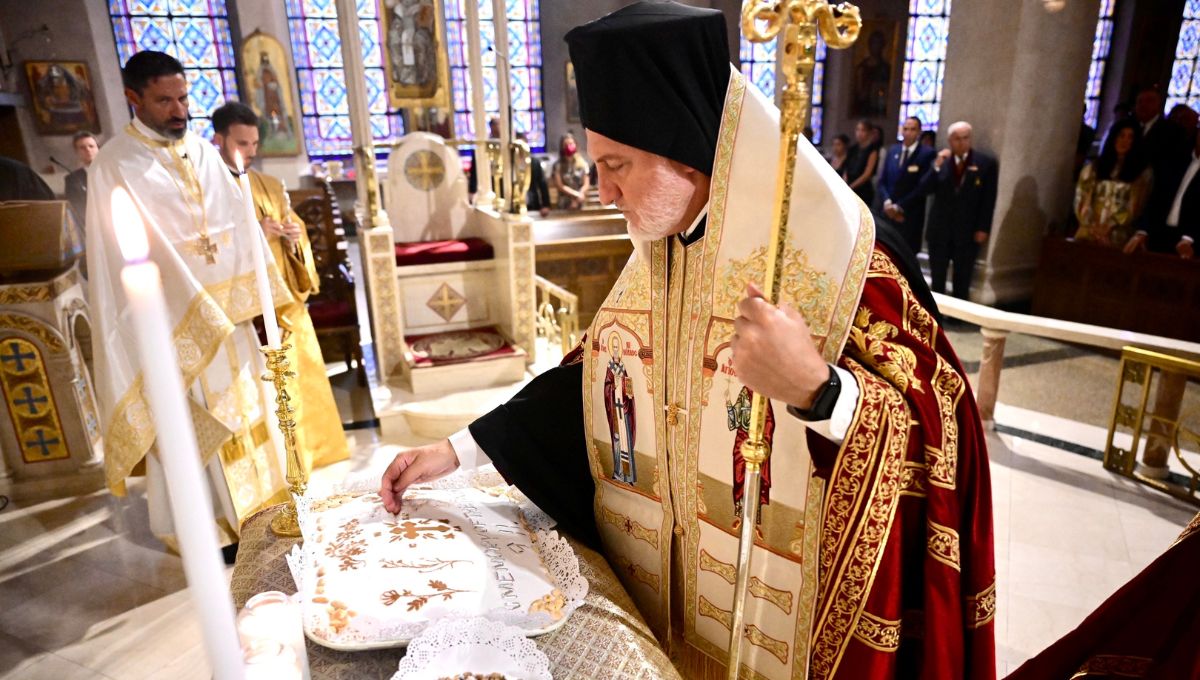 Sisters and Brothers in Christ, and especially

Families and Friends of those lost on 9/11,

We are gathered on this solemn and painful day in order to remember our loved ones who, twenty-one years ago, were so unjustly and cruelly taken from us. September Eleventh is a day that shall never be forgotten.

We stand together in solidarity for their memory, and for the memory of all those lost that day, as well as in the days and years afterward, because of their service on the Hallowed Ground we know as Ground Zero.

We stand together in deep respect for the Heroes of 9/11 – the brave First Responders who went up into the Towers to save anyone they could.

We stand in pride for our rebuilt and resurrected Saint Nicholas Greek Orthodox Church and National Shrine, whose interior is being infused with the living images of our Faith, replete with tributes to those who gave their last full measure.

Last year, on the eve of September Eleventh, we commenced this poignant anniversary by lighting the Shrine for the first time. Last night, we commenced that light again, which shall continue every night into the future.

Thus, our Saint Nicholas National Shrine stands as a beacon of hope and inspiration for every soul that comes to that Holy Place, and beholds the light of faith that our Church manifests.

My dear friends and beloved Christians, last year, we raised candles – as we do at Pascha – right before the lighting, doing so to words that are now inscribed on the façade of the Shrine. First, there was the saying of our Lord Jesus Christ:

Greater love has no one than this, to sacrifice your life for your friends.[*]

We did this not only for the heroic First Responders – the firemen, police and medics who came to the aid of their fellow citizens. But there are also stories that we shall never know – stories of courage, determination, bravery and honor that happened in the final moments inside the towers between our brothers and sisters who lost their lives that day. Their moments of love and compassion, generosity and forgiveness in the face of death and the worst kind of hatred, are forever enshrined in the words of our Lord and Savior inscribed on the Saint Nicholas Shrine. When you go to the Shrine, please pause for a moment before them and take some time to consider their meaning. And rest assured that our Merciful God received their souls in peace.

Then, right before we lit the Shrine one year ago, I intoned the words from the Funeral Oration of Pericles of Athens, the builder of the Parthenon, who lived centuries before our Savior:

“For they gave their lives for the common weal,

and in so doing won for themselves the praise which grows not old, and the most distinguished of all sepulchers –

not that in which they lie buried,

but that in which their glory survives in everlasting remembrance.”

These words are now inscribed just below our Lord’s, as an everlasting memorial to those who were denied the burial of their earthly remains. For in truth, “their glory survives in everlasting remembrance.”

Thus, our Shrine has become the visual symbol of the “most distinguished of all sepulchers” – the human heart. Saint Nicholas will always stand to remind us of the lives that were lived, that were loved and that were ultimately lost on 9/11. In a way wondrous and difficult to comprehend, the Shrine stands as a cenotaph for those denied their burial.

That is why we are gathered today in our Cathedral, as a family in Christ … to remember. To pray together and to weep together. Perhaps even to smile just a little as we remember these loved ones – their grace, their goodness, their essential human value.

And we are gathered today as well to pay our deepest respects and condolences to the families and friends of those who perished on that fateful day.

For the families and the survivors, and for all those traumatized by 9/11, our National Shrine will forever abide as a place of solace, healing and, above all, remembrance.

May the Lord, Who by His glorious Resurrection has borne witness to the fulfilled promise of eternal life in Him, grant unto those who perished and whose memories we honor, eternal repose in the Mansions of the Saints.

Let us join in prayer and say with all our hearts:

May their Memory be Eternal!