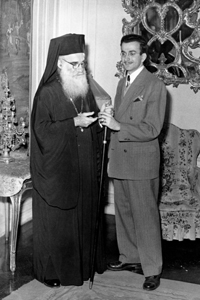 Very few people have had an enduring influence on my life. One, however, stands out in my mind and heart – Archbishop Michael.

In the late 1940s, many parishes in the United States formed youth groups. Many of these groups banded together to form Greek Orthodox Youth Federations.  I was president of one such federation in New York that had 14 youth groups as members. Other federations also existed – in Chicago and the upper Midwest. When Archbishop Michael assumed leadership of our Church in North and South America, he helped these federations of youth groups unite on a national level in an organization named the Greek Orthodox Youth of America, or GOYA.

With Archbishop Michael’s encouragement, GOYA had as many as 30,000 members in the mid-1950s. From the membership of GOYA came hundreds of future presidents of local parishes and boards of trustees, for not only a local parish but for archdiocesan institutions and leadership of Philoptochos and its organization. He was always supportive, encouraging and helpful in GOYA’s progress and success. Many hours were spent in those formative years with the Archbishop. Not only were we building an organization, but we were building friendships and character – things that my generation held deeply. Many of those friendships continue to endure today.

I was so fortunate to know this great man. He was always ready to advise, to love, to inspire and to motivate our Church’s youth. His kindness to all and to me, in particular, was one of his key traits. Further, his good humor and depth of knowledge enhanced his hard work and success. I was especially honored by the auxiliary bishops who chose me to lay the ceremonial wreath upon his grave at St. Basil’s Academy the day of his funeral

We who know you, Your Eminence, pray for you, as we know you pray for us and our beloved Church. 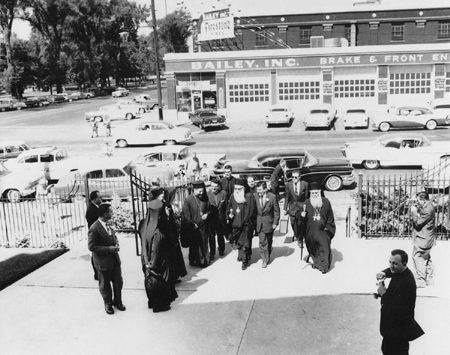 Archbishop Michael arrives for, what was to be his final Divine Liturgy on June 29th, 1958, at Holy Trinity Church, marking the opening of the 14th Biennial Clergy-Laity Congress in Salt Lake City. He is welcomed by William Cocorinis and several hierarchs including Metropolitan Germanos of Elias, Greece.

Michael Sotirhos is a former U.S. Ambassador to Greece and to Jamaica, Former President, Archdiocesan Cathedral of the Holy Trinity, Member, First National Council and First Treasurer of GOYA.